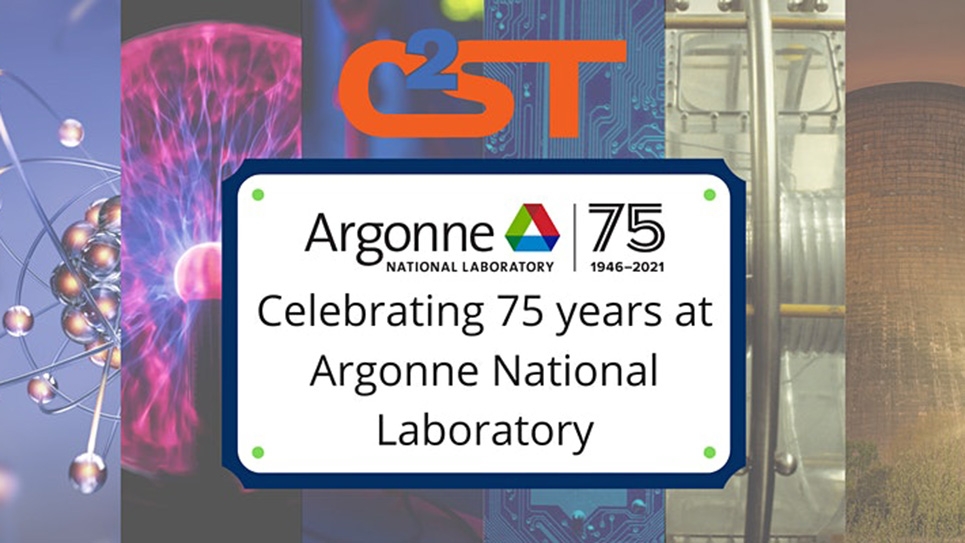 Celebrate 75 years of innovation, invention and discovery in the fields of physics, energy and computing out of Argonne National Laboratory.

1946 was an important year across the globe--the United Nations held its first meeting, Tupperware was introduced to consumers, and Argonne National Laboratory was founded with the mission of harnessing nuclear reactions for peaceful energy purposes. In the 75 years since, Argonne has been at the forefront of cutting-edge innovation and impact, and has grown into one of the country’s largest science laboratories. C2ST and Argonne National Laboratory are excited to kick off a 75th anniversary celebration partnership that will highlight Argonne’s numerous accomplishments and give an in-depth look into some of the five user facilities, which feature an extraordinary range of cutting-edge scientific tools that support in-depth research, drive technological breakthroughs, improve U.S. competitiveness and quality of life and are used by researchers from around the world!

Argonne aims to tackle societal challenges in science, energy, the environment, and national security. To start the celebration, we will hear from experts about the five user facilities, and highlight two of them: the Argonne Leadership Computing Facility (ALCF) and the Advanced Photon Source (APS). The ALCF’s supercomputing power enables researchers to access and sift through mass quantities of data, creating complex models to solve the world’s most complex problems. The APS provides ultra-bright, high-energy x-ray beams to biologists, chemists, environmentalists and physicists.

C2ST is proud to partner with Argonne National Laboratory, and to share their stories. In an ongoing effort to highlight Argonne’s accomplishments during their 75th anniversary year, we will be taking deep dives into even more exciting research taking place at Argonne throughout 2021.

Katherine Riley is the Director of Science for the ALCF leading a fantastic team of experts in computational science, performance engineering, visualizations, and data sciences. She leads scientific strategy for the ALCF, ensuring the facility delivers leading-edge computational capabilities and expertise that help advance fundamental discovery and understanding in a broad range of scientific and engineering disciplines. The ALCF is familiar territory, as she was one of the facility’s first hires in 2007. She previously served as a principle scientific application engineer and was the originating manager of the ALCF catalyst team, a group of computational scientists who work directly with users to help them maximize their time on ALCF systems and achieve their research goals. She has been a key contributor to the strategic vision of the facility, assisting with the design and development of ALCF supercomputers by helping to identify the scientific requirements for new systems. She collaborates extensively across the DOE complex working to understand and improve the environment for high performance scientific computing. She has spent her career focused on scientific application architecture and how this impacts performance, scalability, and extensibility. Prior to joining the ALCF, she served as scientific applications engineer in the MCS division at Argonne and as a senior scientific programmer at the University of Chicago where she was a primary developer and co-architect of the FLASH multi-physics code. Research interests include scientific software engineering, scientific application code architecture, performance, portability, supercomputing architectures, and multi-physics.

Curt Preissner, is a Principal Mechanical Engineer in the Beamline Instrumentation group at the Advanced Photon Source (APS). He started working at the APS as a PhD student in 2001, and the interesting work, his enthusiasm for enabling world-class science, and the sheer coolness of working at a particle accelerator has kept him there. In his career at the APS, Curt has worked on both the particle accelerator and beamline side of the APS, using his specialized expertise in vibration and precision mechanics to help design key accelerator and beamline components with nanometer-level stability. He helped lead the team that designed the fast and stable Velociprobe and is currently the lead engineer on the APS Upgrade feature beamline instruments, the PtychoProbe and Atomic. Curt has been a key contributor to application-driven R&D programs to develop the stable supports for the 40000 lb. APS Upgrade magnets and novel precision positioning systems. He holds five patents and has numerous publications. Curt shares his interest and passion for science by mentoring students, and speaks regularly to high-schools, colleges, and the public.