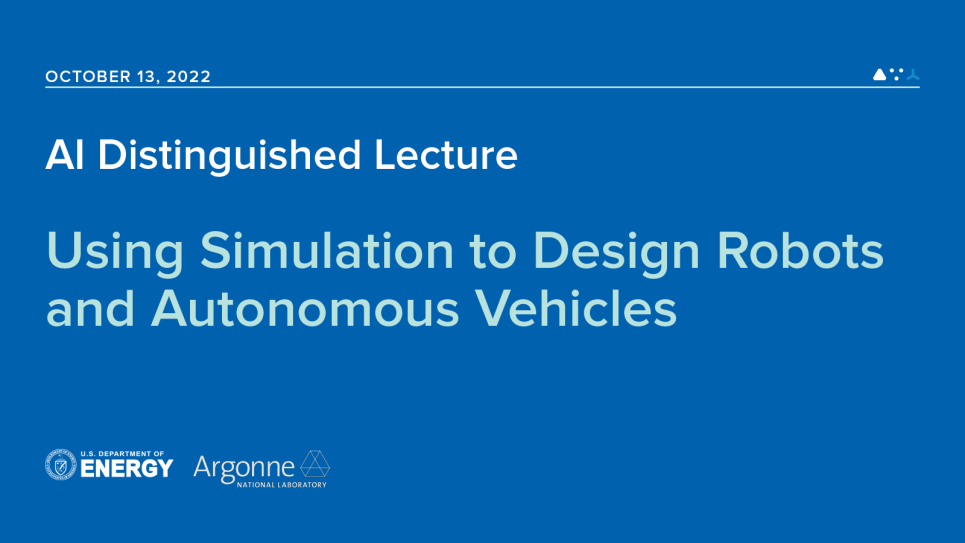 This talk is about using computer simulation to design robots and autonomous vehicles, and it is inspired but the following vision. One can take a robot and torment it with bad control policies and uninspired perception algorithms. Alternatively, to design the brain of the robot, one can take a model of the robot and test through simulation various perception, planning, and control algorithms. The good algorithms are subsequently deployed on the actual robots.

On paper, the simulation idea is great – it cuts costs, it is fast, safe, and thorough. In practice, lessons learned in simulation often fail to transfer to the actual robot, a manifestation of the so-called sim-to-real gap.

This talk is about two things: (i) an open source software infrastructure called Chrono, which we help develop and use to simulate the robot, the sensors on the robot, and the virtual world in which the robot/autonomous vehicle operates; and (ii) how to measure and close the sim-to-real gap. For (i), things look up; for (ii), it is a struggle to identify, understand, and address factors that many times make autonomy stacks that look great in simulation fail in the real world. This work is sponsored by NSF, NASA, DOD, and DOT.

Dan Negrut received his Mechanical Engineering Ph.D. in 1998 from the University of Iowa under the supervision of Professor Edward J. Haug. He spent six years working for Mechanical Dynamics, Inc., a software company in Ann Arbor, Michigan. In 2004 he served as an Adjunct Assistant Professor in the Department of Mathematics at the University of Michigan, Ann Arbor. He spent 2005 as a Visiting Scientist at Argonne National Laboratory in the Mathematics and Computer Science Division. At the end of 2005 Dan joined the Mechanical Engineering faculty at the University of Wisconsin-Madison. His interests are in Computational Science and he leads the Simulation-Based Engineering Lab (http://sbel.wisc.edu). Lab sponsors include NASA, US Army Research Office, Department of Transportation, and National Science Foundation. The lab’s projects focus on high performance computing, computational dynamics, terramechanics, simulation-in-robotics, and fluid-solid interaction problems. Dan received a National Science Foundation Career Award in 2009. Since 2010 he is an NVIDIA CUDA Fellow. He is one of the technical leads of Project Chrono, an open source physics-based simulation engine (http://www.projectchrono.org/).