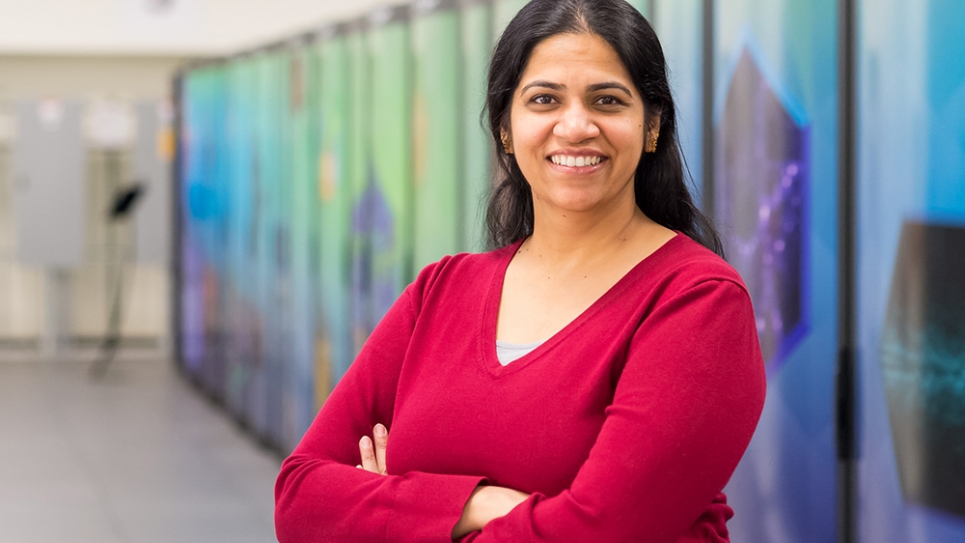 As Deputy Division Director of the Argonne Leadership Computing Facility (ALCF), Jini Ramprakash spends her days working on strategic initiatives and facility operations for one of the world’s premier computational science centers. Despite this demanding role, she also manages to carve out time for one of her passions: encouraging and guiding young women toward careers in STEM (Science, Technology, Engineering, and Mathematics).

In recognition of her mentoring and outreach efforts, Ramprakash received the 2017 Motivator Award from the Association of Women in Science (AWIS) Chicago Chapter during a Nov. 2 gala in Chicago.

“This was quite unexpected,” Ramprakash said. “There are so many amazing role models at Argonne National Laboratory who do so much to motivate me. I always try to pay it forward the best that I can.”

At Argonne, Ramprakash regularly participates in and helps organize laboratory initiatives designed to inspire young women to enter STEM fields. This includes serving as a volunteer and mentor for Argonne’s annual Introduce a Girl to Engineering Day and the Science Careers in Search of Women conference, which are supported by the lab’s Women in Science and Technology (WIST) program. Both of these events invite young female students to Argonne for hands-on activities, tours, and interaction with women mentors from the laboratory.

“WIST is very grateful for Jini’s enthusiasm and dedication in contributing to these programs for many years,” said Lydia Finney, WIST’s program initiator.

Ramprakash is also an active contributor to Systers, an online community of women in technical computing roles. As a volunteer for Systers-supported initiatives like the Google Summer of Code and Code-In programs, she mentors and consults young women working on real open source software development projects.

In addition, Ramprakash serves on a few review committees for the Grace Hopper Celebration of Women in Computing, the world's largest gathering of women technologists. Here, she represents Argonne, working to grow the participation of other national laboratories, and connecting women in STEM with potential career opportunities.

“Getting staff engaged and producing good results is one area where she really excels,” Papka said. “But she truly shines when she meets and mentors young people, both inside and outside of the lab. Jini has been involved in educational outreach for many years. She is a good ambassador for the ALCF, and a strong advocate for pursuing science careers in general.”

The ALCF is a U.S. Department of Energy Office of Science User Facility.

The U.S. Department of Energy's Office of Science is the single largest supporter of basic research in the physical sciences in the United States and is working to address some of the most pressing challenges of our time. For more information, visit the Office of Science website