ALCF Staff Encourages Girls to Get Excited About Science 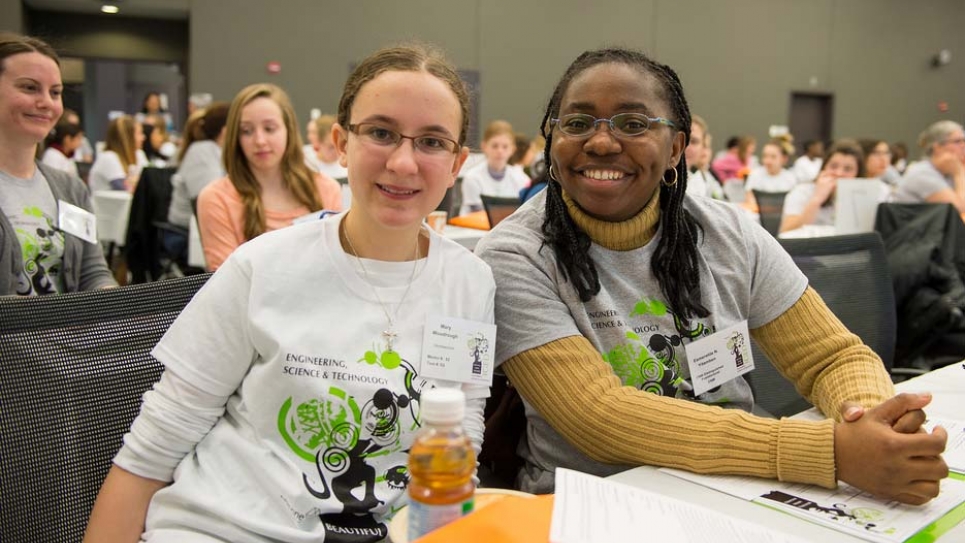 Women account for about half of our nation’s workforce, yet they hold only 24 percent of the jobs in STEM (science, technology, engineering, and mathematics) fields.

With Argonne’s annual Introduce a Girl to Engineering Day (IGED), female researchers at the lab are working to address this gender imbalance by showing young girls the excitement of science careers firsthand.

“When students see successful women who are enjoying their work in a variety of science and engineering fields, I think it opens their eyes to new career possibilities,” said Jini Ramprakash, a technical support specialist at the Argonne Leadership Computing Facility (ALCF).

“Considering how much of a gender gap there is in the STEM fields, events like this are crucial to help close the gap,” said Ramprakash, who served on the IGED organizing committee. “A lot of students know what they want to do by the time they get to high school, so we’re trying to make an impression early on.”

In addition to educating girls about potential careers paths, IGED connects the students with potential role models who help break through the societal norms and stereotypes that may inhibit women from pursuing STEM careers.

“At that age, everybody wants to make sure they look cool. A lot of the girls think science and computers are geeky,” said Mantrala, an ALCF technical support analyst, who volunteered as a mentor at IGED. “We’re trying to show them that science can actually be very cool. Careers in these fields allow for creativity, independence, and a chance to make a real difference.”

The IGED event featured an engineering expo, hands-on activities, and facility tours including a stop at the ALCF where Ramprakash had the opportunity to point out the machine room that houses Mira, Argonne’s new Blue Gene/Q supercomputer.

“When I explained that a typical laptop has two cores compared to Mira’s 786,000 cores, it was fun to see their eyes light up,” she said.

The group touring the ALCF also stopped off at the Visualization Lab, where researchers Mark Hereld, Joe Insley, Tom Uram, and Nicola Ferrier showed the students how they use state-of-the-art tools to turn computer simulation data into impressive visualizations. This included:

Mantrala said it was encouraging to see the girls’ reactions throughout the day. She hopes IGED will inspire a few participants to be a part of the next generation of scientists and engineers.

“Our society has a need for more skilled people in STEM fields,” she said. “By increasing women’s interest and sense of belonging, we can help fill that void while also addressing the gender gap.”