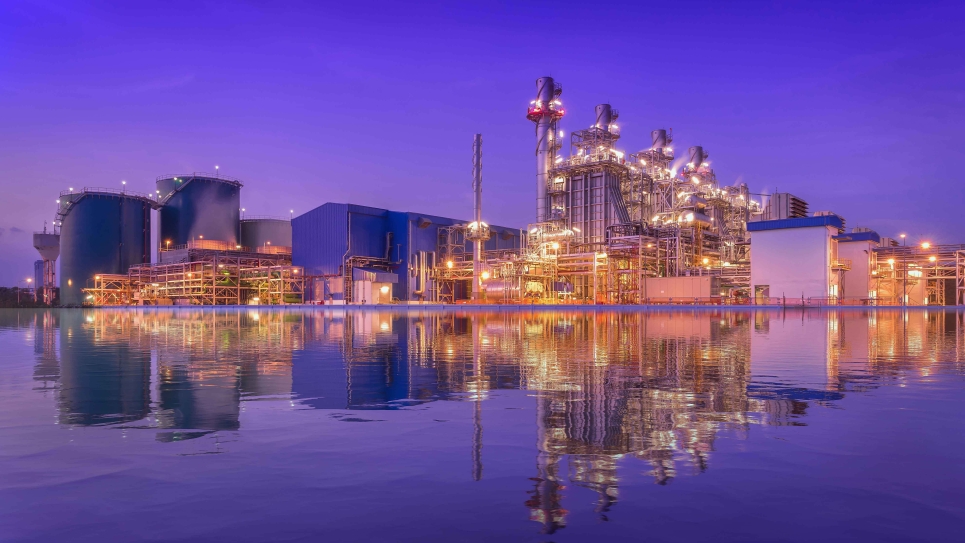 Argonne has received funding from the DOE for two new high performance computing projects that advance cutting edge manufacturing and clean energy technologies. One of the projects focuses on modeling carbon capture technology for use on industrial gas turbines, such as those at gas power plants. (Image by Shutterstock/ETAJOE.)

Companies are constantly looking for ways to cut their energy bills and reduce their carbon footprint. But getting promising new technologies to market is a process that can often take years. It may also be beyond the scope of any one company to tackle on their own.

To help address this challenge, the U.S. Department of Energy (DOE) has awarded DOE’s Argonne National Laboratory with $600,000 in federal funding to work on two new projects that will advance cutting edge manufacturing and clean energy technologies. These projects will leverage the scientific expertise and high performance computing (HPC) resources at Argonne to improve energy efficiency in chemical manufacturing and advance the use of carbon capture technology.

Both projects are part of the DOE’s High Performance Computing for Energy Innovation (HPC4EI) initiative. This DOE initiative invites companies to apply for funding to work with a national laboratory, leveraging their world-class computing resources and expertise to advance the national clean energy agenda.

Modeling carbon capture technology for use in industrial gas turbines

Argonne is helping Solar Turbines Incorporated model the use of cost-effective carbon capture technologies on industrial gas turbines used for power generation, marine propulsion, and oil and gas production. The technology recirculates part of the exhaust back into the turbine engine. This increases the CO2 concentration in the final exhaust stream to a desired level, lowering the cost of carbon capture and sequestration. However, if too much exhaust gas is reused, it can cause the flame powering the turbine to sputter and eventually go out. The team is working together to simultaneously optimize the flame stability in the gas turbine, while maximizing the potential for carbon capture.

By cutting the cost of capturing CO2 from the exhaust before it enters the atmosphere, the adoption of this technology has the potential to drastically reduce greenhouse gas emissions. This could cut the carbon footprint of gas power plants as well as from gas turbines in a variety of other industrial applications.

Argonne’s scientists and engineers have more than ten years of experience using HPC and modeling to optimize the performance and energy efficiency of engines in cars, trucks, and heavy equipment. But this is the first time they will be tackling an engine at this scale. Because of the size and the complexity of the gas turbines, only a supercomputer like those at Argonne will be able to handle modeling the flows and chemical reactions, while optimizing the turbine engine performance. By using this virtual platform, Solar Turbines can shave months or even years off the product testing and development process, rapidly accelerating the time-to-adoption of this promising new technology.

Argonne will also be working with the largest chemical manufacturing company in the U.S. —The Dow Chemical Company — to help them optimize the efficiency of advanced mixing equipment. Using computational fluid dynamics (CFD), the team will model the complex flow inside gas-liquid turbulent jet mixers used in chemical manufacturing. Then, they will optimize the internal design of the mixing equipment to maximize the performance with minimal energy use. This will be done using a combination of the CFD model and Argonne’s unique machine learning (ML) tool known as ActivO.

This project has the potential for enormous energy savings. When used effectively, turbulent jet mixers use 2-3 times less energy than traditional mechanical mixing equipment. On top of the energy savings, the adoption of this technology will allow Dow to reduce downtimes, saving millions of dollars per plant.

Argonne scientists have extensive experience using CFD and ML to optimize turbulent mixing within engines. The Dow project allows Argonne scientists to apply their existing tools and expertise to a new field. It will also provide a clear demonstration case for using HPC to accelerate transformational technological advances in the chemical industry.

Companies chose to work with Argonne for their HPC4EI projects because of the experience Argonne scientists have using HPC for modeling and optimization of manufacturing processes and new energy-efficient technologies. They also came to Argonne to access some of the fastest supercomputers in the world.

At the Argonne Leadership Computing Facility (ALCF), a DOE Office of Science user facility, companies can access computers that are up to 100 times more powerful than systems typically used by corporations. By combining these supercomputing resources with state-of-the-art modeling, simulation, and data science, Argonne can help companies bring their energy innovation projects online much faster than they would be able to do on their own.

By helping manufacturers harness the raw power of HPC, the HPC4EI program helps companies improve performance, reduce emissions, and advance the development of clean energy technologies. Argonne is proud to be part of this effort. Together, we are working to accelerate the transition to a clean energy economy.

The HPC4EI program is sponsored by the Department of Energy’s Advanced Manufacturing Office (AMO) within the Energy Efficiency and Renewable Energy (EERE) Office and the Office of Fossil Energy and Carbon Management (FECM).