Out of thin air 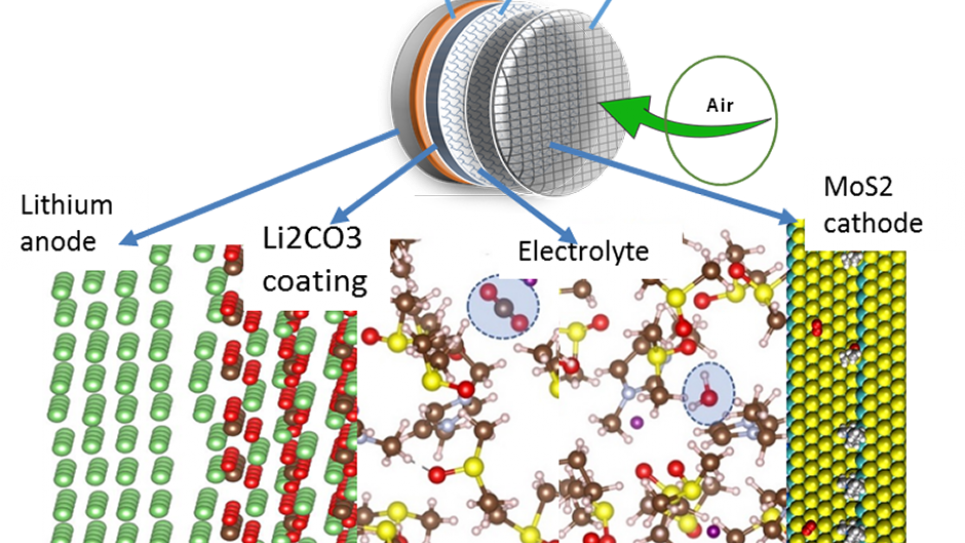 The lithium-ion battery has transformed the portable electronics industry and is making inroads into energy storage on the electric grid and electrically powered transportation. Today, research laboratories around the world are seeking to develop beyond-lithium-ion batteries that are even more powerful, cheaper, safer and longer lived.

As reported in the journal Nature, a team of scientists from the University of Illinois at Chicago and the U.S. Department of Energy’s (DOE) Argonne National Laboratory has produced a new design for a beyond-lithium-ion battery cell that operates by running on air (hence, referred to as “lithium-air”) over many charge and discharge cycles. Larry Curtiss, co-principal investigator and Argonne Distinguished Fellow, observed that the team’s article was appealing to Nature because “others have tried to build lithium-air battery cells that run on air, but they failed because of little cycle life.”

The problem with past technology has been that battery cells tested in the lab required a separate supply of pure oxygen (hence, referred to as lithium-oxygen batteries). As a consequence, a tank of oxygen gas would have to be part of the battery system, making it prohibitive for use in electric vehicles due to space requirements. A lithium-air battery that uses air from outside eliminates this problem.

The key features of the team’s newly developed battery cell are a new protective coating for the lithium metal anode, which prevents the anode from reacting with oxygen and hence deteriorating, and a novel electrolyte mixture that allows the cell to operate in an air atmosphere. In tests under an air environment, this cell maintained high performance during 700 cycles, far surpassing previous technology. According to Amin Salehi-Khojin, co-principal investigator and assistant professor at the University of Illinois at Chicago, “The energy storage capacity was about three times that of a lithium-ion battery, and five times should be easily possible with continued research. This first demonstration of a true lithium-air battery is an important step toward what we call beyond-lithium-ion batteries.”

The team’s basic science computational studies uncovered how this system operates in air and what factors contribute to the improved cycling stability. This new knowledge should prove crucial in scientists’ continued efforts to develop a full-size lithium-air battery.

The researchers at the University of Illinois at Chicago built, tested, analyzed and characterized the battery cells, while those at Argonne mainly handled the basic science computational studies. Important to the project’s success was the use of the Argonne Leadership Computing Facility (ALCF) and the Center for Nanoscale Materials (CNM) for high-performance computing. The ALCF and CNM are DOE Office of Science User Facilities, both located at Argonne. Equally instrumental was the Research Resources Center at the University of Illinois at Chicago.

The research was funded in part by the National Science Foundation, DOE’s Office of Science and the State of Illinois. Several of the researchers received support from the Joint Center for Energy Storage Research, a DOE Energy Innovation Hub, and the Center for Electrical Energy Storage: Tailored Interfaces, a DOE Energy Frontier Research Center, both also supported by the Department’s Office of Science.