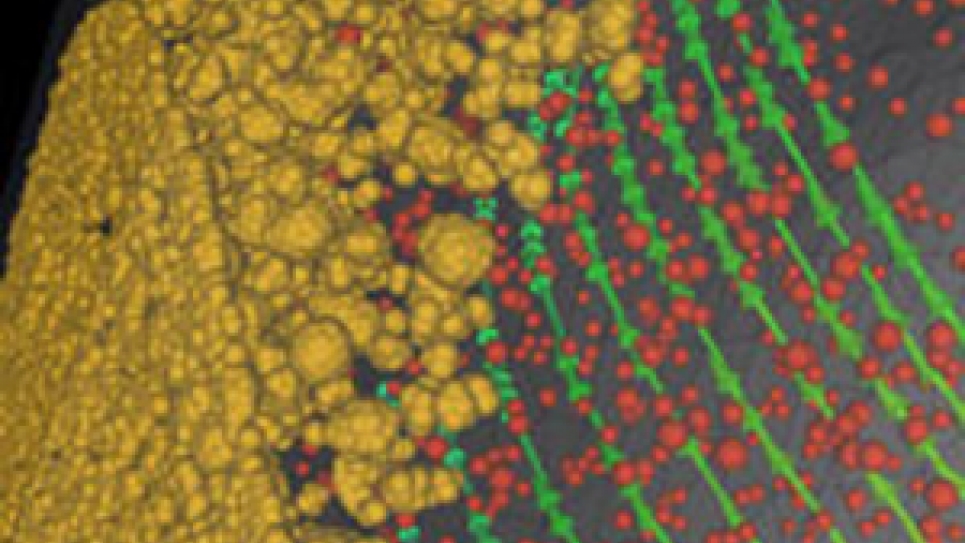 Each year, scientists participating in SciDAC, along with other researchers from the computational science community gather at the annual conference to present scientific results, discuss new technologies, and explore new approaches to collaboration. They also award OASCR's, which stands for the Office of Advanced Scientific Computing Research, to recognize some of the best work in computer-generated visualizations. Conference attendees vote for their favorites among 23 finalists, submitted by research groups all over the country, which comprise the People's Choice awards.

"Visualizations are an incredibly powerful way for scientists to gain new insights into complex problems and see details never before possible", said Joseph Insley, a principal software developer at Argonne and presenting author of both award-winning visualizations. "At Argonne, we are fortunate to have the expertise in software development and computation as well as the hardware resources necessary to make these visualizations possible".

Most science applications that run on supercomputers, like the IBM Blue Gene/P at the Argonne Leadership Computing Facility (ALCF), generate huge volumes of data. In order to analyze and explore this data, resources and expertise are needed to convert the data to visual representations.

"Finding the resources and software capable of visualizing data at such large scales can be a challenge",said Mark Hereld, who leads the visualization and analysis efforts for the ALCF. Fortunately, the ALCF is home to Eureka, one of the world's largest graphics supercomputers, which features 200 high-end graphics processing units and provides more than 111 teraflops and 3.2 terabytes of RAM. Eureka enables breakthroughs in visualization and data analysis and was used by both research teams to create the award winning visualizations.

"Blood Flow: Multi-scale Modeling and Visualization" shows detailed models of blood flow that can shed light on the interactions occuring between physical phenomena happening at different scales. For example, the adhesion of red blood cells to the arterial wall leading to clot formation, and changes in flow patterns due to the clot. Researchers hope these simulations will lead to better diagnoses and treatments for blood flow complications. The research team included Leopold Grinberg, George Karniadakis, Dimitry Fedosov, and Bruce Caswell, from Brown University, and Joseph Insley and Michael Papka from Argonne.

"Modeling Early Galaxies Using Radiation Hydrodynamics" models the gravity and gas dynamics of early galaxies and their interaction with light to help us understand the impact the heating of gas had on star formation. The simulation, which provides confirmation of the physics model implemented, demonstrates features that can be difficult to identify algorithmically but are easily found when watching the visualization. The research team included Argonne's Mark Hereld, Joseph Insley, Michael Papka, and Venkatram Vishwanath, along with Robert Harkness, Michael Norman and Rick Wagner from San Diego Supercomputer Center at the University of California, Eric Olson from the University of Chicago, and Daniel Reynolds from Southern Methodist University.

Both simulations were computed using resources at the National Institute for Computational Sciences with support from the National Science Foundation, and the ALCF at Argonne National Laboratory, which is supported by DOE's Office of Science. Both winning entries are also supported by DOE's Innovative and Novel Computational Impact on Theory and Experiment program, which awards sizable allocations of time - typically, millions of processor-hours per project - on some of the world's most powerful supercomputers in order to address grand challenges in science and engineering.

A full list of the 2011 winners can be found at: http://events.cels.anl.gov/scidac11/visualization-night/