Teaching the programmers of tomorrow 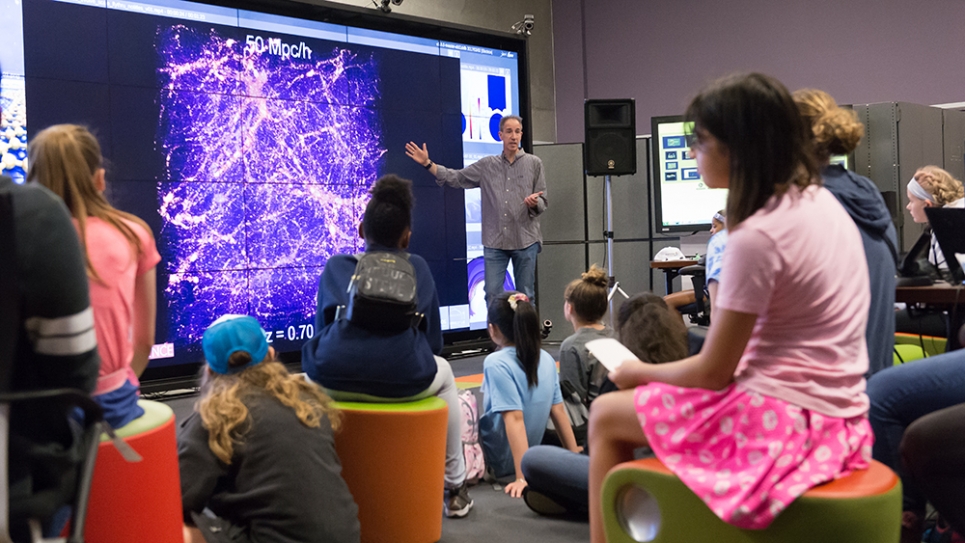 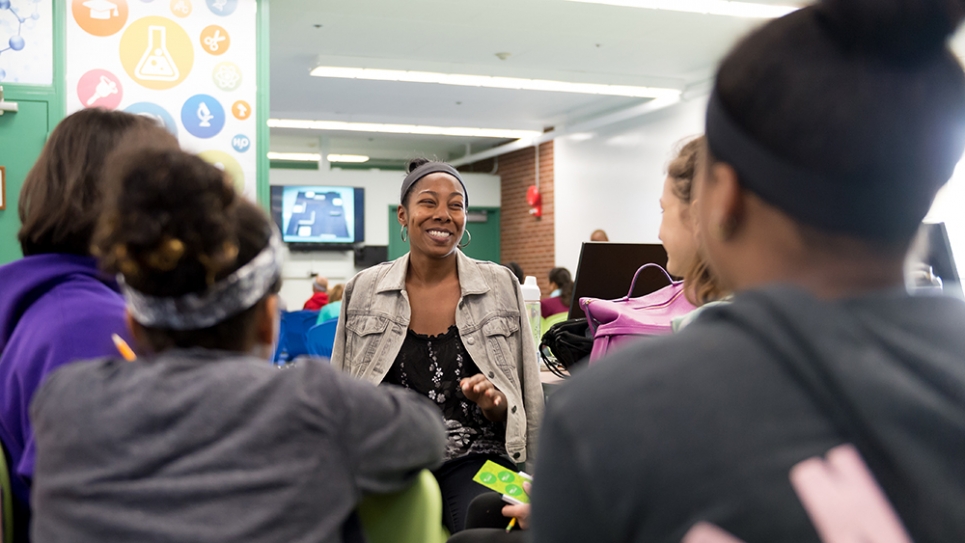 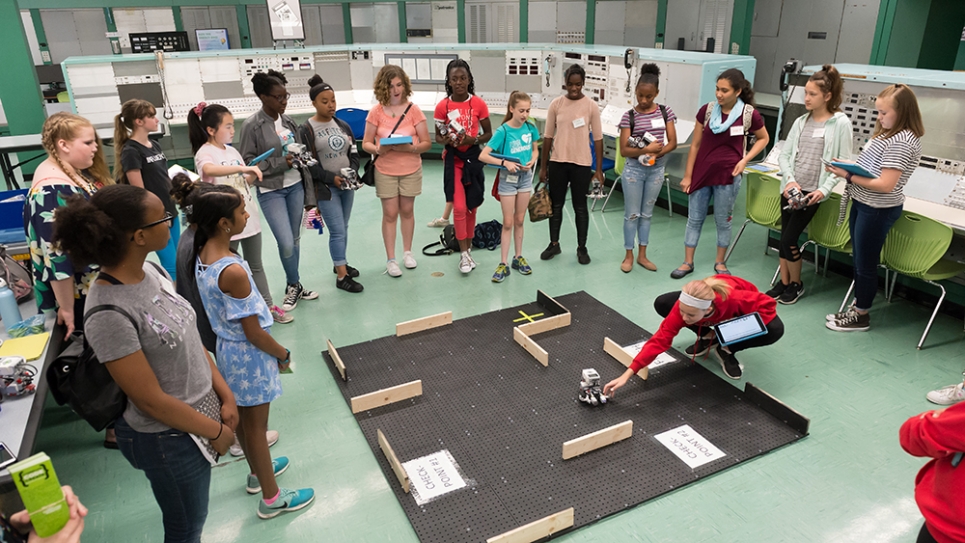 Many middle school students spend their summers swimming at the beach, playing sports outside, or hanging out with their friends. But this past June, 25 seventh and eighth grade girls spent two days at the U.S. Department of Energy’s (DOE) Argonne National Laboratory learning how to code.

This was the second year of the laboratory’s CodeGirls@Argonne camp, designed to immerse young girls in computer science before they enter high school and introduce them to potential career paths in science, technology, engineering, and mathematics (STEM). Staff members from the Argonne Leadership Computing Facility (ALCF), a U.S. Department of Energy Office of Science User Facility, are among the volunteers who help the CodeGirls event fulfill its mission of bringing computer science to a population that’s often underrepresented in the field.

“It is important for girls—especially those in the very influenceable middle school years—to see role models who look like them, who talk like them, and who they can easily relate to,” says Jini Ramprakash, a CodeGirls volunteer and Deputy Director of the ALCF. “They can visualize what success looks like for them in this profession.”

The camp is completely free—though a waitlist is started after the first 25 applications have been received—and there is no coding experience required. “Some of them have never done any coding before, some of them are high-flyers in coding,” says Kelly Sturner, Argonne Learning Center Instructor in the Department of Educational Programs, who designed and organized the camp. “But there is something for everybody here.”

“Sometimes, when you think of coding, you think of just some guys sitting in their basement,” says Paige Brehm, a Master’s co-op student in Educational Programs. “But it's way more than just that.” Having studied chemistry as an undergraduate, Brehm had her own doubts about being a female in a STEM field, and that experience informed her work when she and Sturner organized CodeGirls for the first time last year.

Throughout the two days of the camp, the middle schoolers learned about the many facets of computer science and working in STEM. The girls were shown videos that taught them about the history of women in computing, and they discussed the challenges that come with entering a male-dominated field. They participated in a variety of programming-related activities, including using block code to navigate a Lego EV3 Mindstorm robot through a complicated maze. “The goal is really to get the kids to think like computer scientists,” says Sturner.

One popular activity leveraged a drawing code called “Turtle” that introduced the girls to the basics of the Python programming language. Sturner and Brehm said the campers expressed interest in learning text-based coding languages in addition to the drag-and-drop block style that the LEGO robot requires. Python is the perfect introduction since it’s easy to learn and many scientists at Argonne use it in their everyday work.

Sturner said Turtle taught the girls how to make lines, squares, spirals, change colors, and more. Once they had grasped the basics, the campers were set loose with the code. One girl said, “I liked learning many new things and being in control of what was happening, to make new things in front of my eyes.”

“It was really nice to give them opportunities to see that there's different ways to code,” says Brehm.

Another highlight of the two days was when the campers got to meet and interview five women scientists who work at Argonne, including some from the ALCF.

The campers split up into small groups so that each girl could get to know their assigned researcher on a more personal level. The scientists answered their questions, which ranged from biographical (“Where did you go to college?”) to practical (“How many hours do you work every day?”)

For example, the five girls interviewing Ramprakash asked about her favorite part of being a scientist. Ramprakash responded by telling them about the joy and satisfaction of finding the solution to a problem that has taken a long time to solve.

Liza Booker answered her group’s questions about how she uses Python in her job as a User Experience Analyst with the ALCF. “It was very enlightening to talk with the girls about computer science, their current studies, and college,” she says. “I think opportunities like CodeGirls are valuable so that girls can see and engage with visual representations of women in male-dominated fields.”

The campers were also treated to a tour of the ALCF’s machine room and visualization lab in Argonne’s Theory and Computing Sciences Building. Ramprakash and ALCF User Experience Specialist Haritha Som taught the group about Mira, the ALCF’s 10-petaflops IBM Blue Gene/Q system, and then took them onto the floor of the machine room to see the supercomputer itself. The girls wanted to know things like, “How is a supercomputer made?” and “How do you store the data?” and “Why is it so cold in here?”

“I'm always amazed at how smart, intelligent, and curious girls in elementary school can be,” Ramprakash says. “I agreed to help out [with CodeGirls] because I thoroughly enjoy interacting with these kids and learn so much through their questions and conversations every time.”

Next, ALCF computer scientists Joseph Insley and Silvio Rizzi showed the campers around the Visualization Lab. Insley talked about how using high-quality scientific visualizations is often the best way to gain insight into the massive datasets that are produced by ALCF supercomputers. He showed high-resolution images on the lab’s enormous tiled display, explaining the value of seeing all the fine details and the ability to use the screens as a collaborative and interactive space. Rizzi then passed out 3D glasses and showed visualizations using a “passive stereo” screen—essentially the same technology as in a 3D movie theater. Seeing data rendered in 3D provides additional depth and perspective that can lead to better insight and understanding of the data, according to Insley.

“The visualizations, the large display, and cool tech often have a bit of a ‘Wow!’ factor,” says Insley. “With the CodeGirls, and other groups like them, we explain that underlying all of the cool stuff they saw is a bunch of computer code. Someone had to program that. Why not them?”

Sturner hopes to see CodeGirls alumnae participating in the high school-level summer coding camp, a program that Educational Programs runs in partnership with ALCF, when they are old enough. But the main goal of these two days is to inspire and empower the girls to give computer science a try—and perhaps lead them back to Argonne one day.

It may very well have the desired effect. At the end of the camp, one girl reported, “I think I actually am going to consider becoming a scientist when I grow up.”