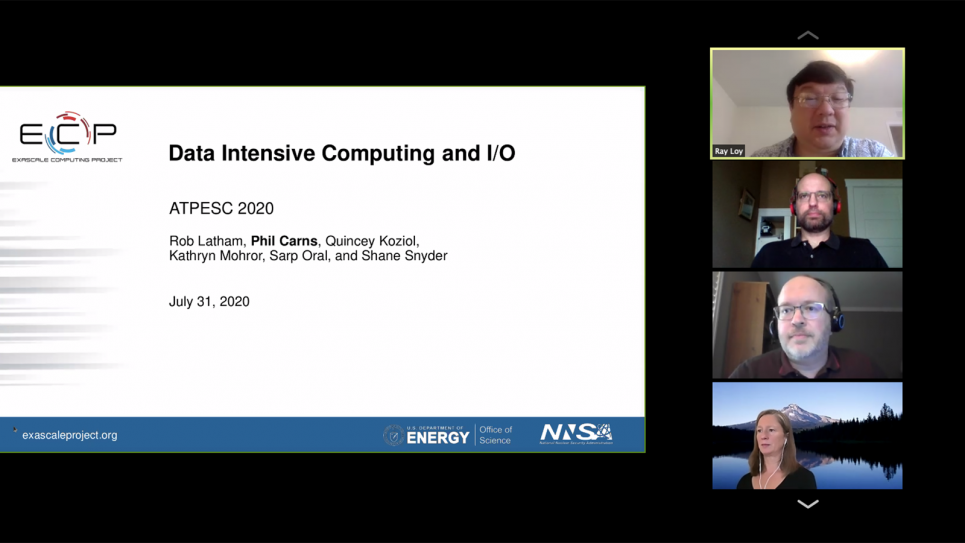 The annual Argonne Training Program on Extreme-Scale Computing went virtual this year, providing two weeks of instruction to ready attendees for science in the exascale era.

The eighth annual Argonne Training Program on Extreme-Scale Computing (ATPESC), an intensive, two-week program that teaches participants the skills needed to use the world’s most powerful supercomputers, was held virtually for the first time this year due to the COVID-19 pandemic.

“Our options were to either postpone the program — with no guarantee that it could happen as an in-person event at a later date — or hold the meeting virtually,” said Ray Loy, program director of ATPESC, which is hosted by the U.S. Department of Energy’s (DOE) Argonne National Laboratory and funded by DOE’s Exascale Computing Project (ECP), a collaborative effort of DOE’s Office of Science and the National Nuclear Security Administration.

Participants included more than 70 senior graduate students, postdocs and career professionals in computational science and engineering from institutions mostly in the United States, but also countries ranging from Canada to Finland.

Aleksandra Pachalieva, a graduate research assistant at the Center for Nonlinear Studies (CNLS) at Los Alamos National Laboratory and a Ph.D. student in Aerodynamics and Fluid Mechanics at Technical University of Munich in Germany, attended ATPESC to learn about the current and future development of high-performance computing (HPC) systems.

“I benefited immensely from the program,” she said. ​“Aside from technical aspects of exascale computing, I learned a lot about software productivity, quality and sustainability. The systems and tools that we are using are changing constantly, but having good software practices is a key concept that will ensure the success of the software we develop as scientists. This was my eye-opening moment during ATPESC and I will try to apply these practices in my future projects.”

Founded in 2013 by now-retired Argonne Distinguished Fellow and former ECP Director Paul Messina, ATPESC was designed to provide training on the key skills, approaches and tools to design, implement and execute computational science and engineering applications on current high-end computing systems and the leadership-class computing systems of the future.

“The event is composed of lectures and accompanying hands-on sessions for most topics,” Loy said. ​“The hands-on sessions, close interaction with the lecturers and access to large DOE systems, such as those at the Argonne Leadership Computing Facility (ALCF), the Oak Ridge Leadership Computing Facility (OLCF) and the National Energy Research Scientific Computing Center (NERSC), are particularly important features of ATPESC.”

The ALCF, OLCF and NERSC are DOE Office of Science User Facilities.

ATPESC lecturer William Gropp, who is the director and chief scientist at the National Center for Supercomputing Applications (NCSA) and Thomas M. Siebel Chair in Computer Science at the University of Illinois Urbana-Champaign, pointed to some additional benefits of attending the training program.

“ATPESC provides an intense, broad and deep introduction to many aspects of high-performance computing, not just one or two,” Gropp said. ​“Having direct access to some of the leaders in the field is great for asking questions, getting opinions and talking about careers. The participants also benefit from being part of the ATPESC community with their fellow students.”

The training program is structured to align with the ECP’s mission to develop a capable computing ecosystem for future exascale supercomputers, including Aurora at Argonne and Frontier at Oak Ridge National Laboratory.

“The ATPESC agenda is always evolving to meet the needs of the next generation of computational scientists. Upcoming leadership-class systems such as Aurora will rely on GPUs (graphics processing units), so we have added new material and re-focused existing material in this area,” said Loy, who also serves as the lead for training, debuggers, and math libraries at the ALCF.

For example, OpenMP content was adjusted to cover new features that leverage GPUs, and a session on SYCL/DPC++, one of the programming models being developed for exascale systems, was added to the program this year.

“The presentation on SYCL/DPC++ by Argonne’s Thomas Applecourt ended up being the most helpful session for me,” said participant Ral Bielawski, a doctoral student in aerospace engineering at the University of Michigan. ​“He covered a programming model I had never been exposed to before and provided a solution that would target Intel GPUs, and potentially most GPUs in the future.”

To facilitate the virtual format, ATPESC participants viewed lectures via the Zoom video conferencing service. The Slack instant messaging platform was also used for ATPESC for the first time, as a place to post event announcements and communicate via chat both during and after the lectures.

“I’ve found chat to be an effective way to communicate between audience and speaker,” Gropp said. ​“It also made it easier for the instructors who were not lecturing to answer some of the questions.”

In previous years, ATPESC included dinner talks and optional activities that would sometimes go as late as 9:30 p.m., but the virtual event this year had shorter days to accommodate different time zones and ​“the fatigue of being in videoconferences” for two weeks, Loy said.

While the virtual event precluded visiting Argonne in person, ​“there was a virtual tour of the ALCF on Saturday, and one evening a bunch of us got together for a Zoom happy hour,” said participant Kevin Green, a research scientist for the Department of Computer Science at the University of Saskatchewan in Canada.

But it was the program content that will stick with Green and his fellow participants as they look to apply what they learned to their careers moving forward.

“I’ll be using a lot of the ideas I’ve seen here to update material in our high-performance computing courses,” Green said. ​“I’ve also gotten a good feel for how we can migrate our current code designs to designs that will perform well across different supercomputing architectures.”