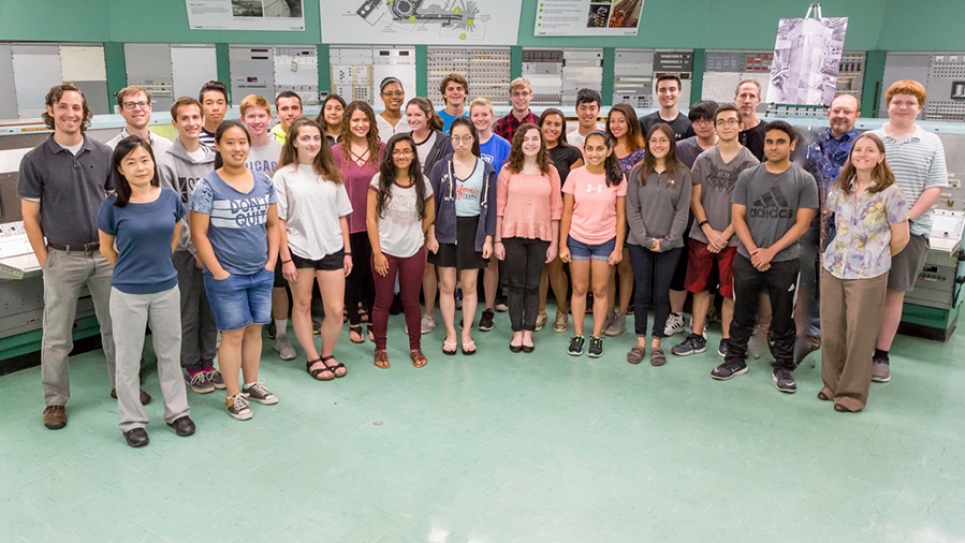 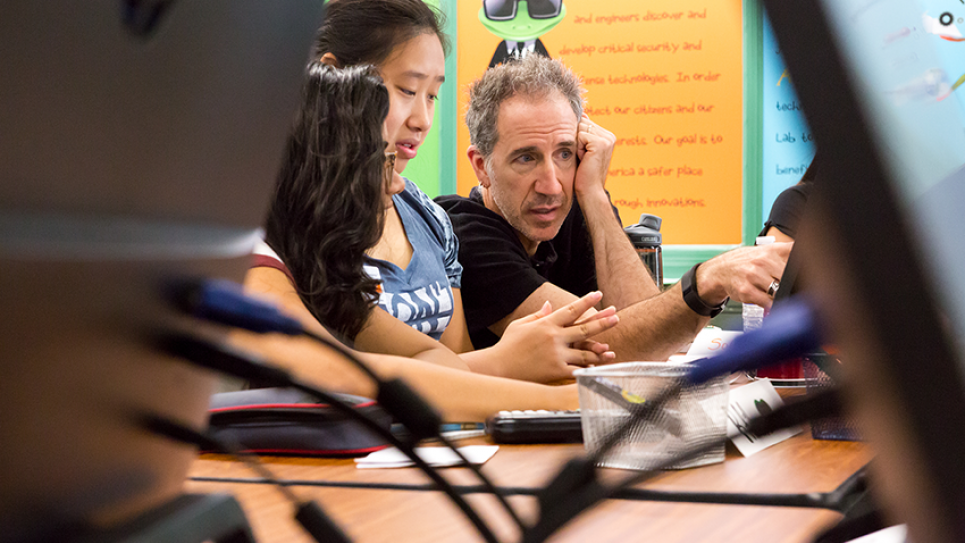 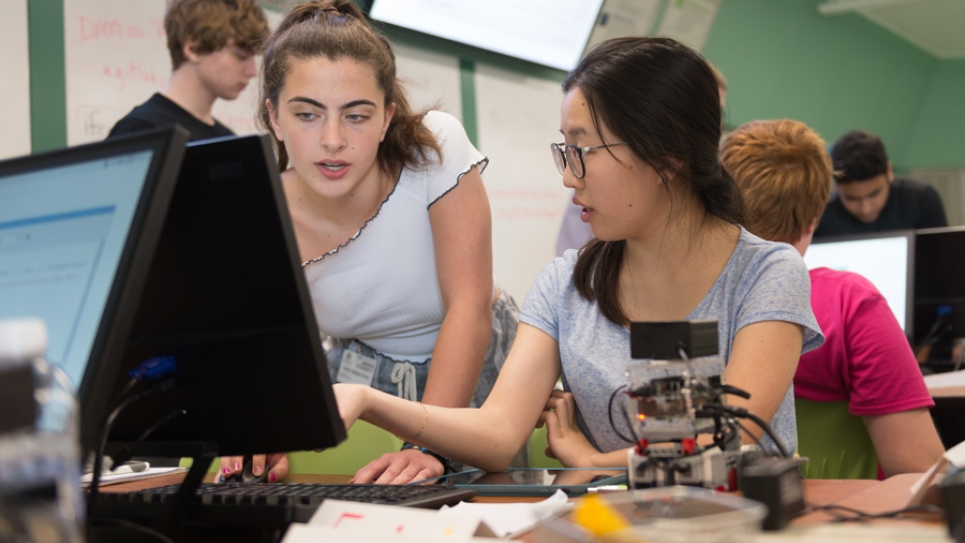 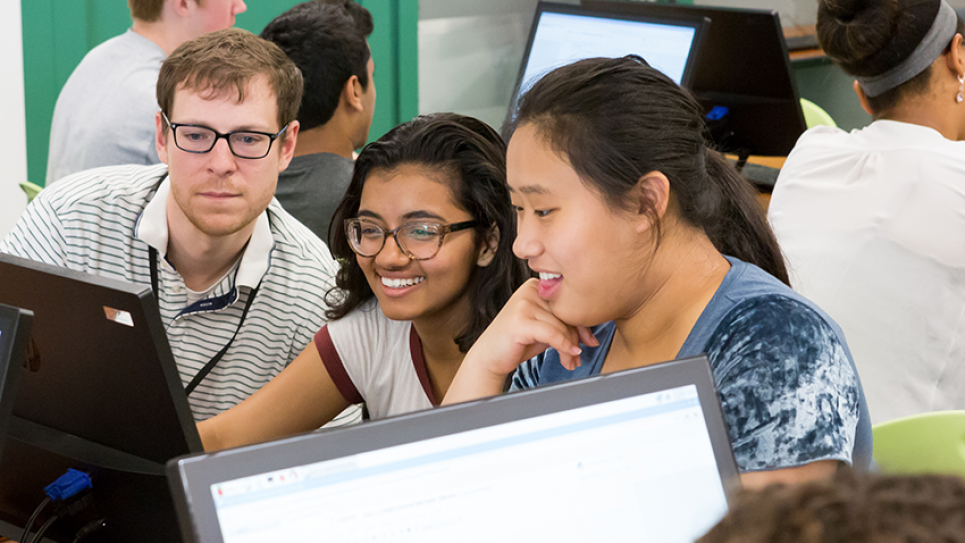 Last month, the U.S. Department of Energy’s (DOE) Argonne National Laboratory hosted a five-day Coding Camp for more than two dozen high school juniors and seniors, teaching new programming skills and how computer science is an integral part of an Argonne researcher’s life.
The coding camp started three years ago from a vision of Mike Papka, deputy associate lab director and director of the Argonne Leadership Computing Facility (ALCF), to encourage and inspire youth to learn about computer science before they reach college.
"It's important for young coders to understand how computer science skills can apply to a broad range of scientific activities,” Papka said. "This camp is a great opportunity for students to learn about the work that the national laboratories do, directly from the staff who are doing it."
Meridith Bruozas, manager of Educational Programs at Argonne, agrees. “Computer science happens everywhere at the laboratory, and our high school students are surprised to find out that if you like weather and computer science, you can be a computational scientist that develops weather models,” she said. “We encourage them to think outside of the traditional image of computer scientists and think about marrying their interests and multiple passions.”
Argonne’s Coding Camp team captured a diverse group of students. Narek Aanyan from Lake Park High School found out about Coding Camp at STEMCON, a fair that highlights science, technology, engineering and mathematics at the College of DuPage. Adam Lee from Naperville Central High School was tipped off about the camp by his dad, and a student from Reed Custer High School in Braidwood, Illinois learned about the camp from the technology department at his school. Lee plans to major in pre-med, but may look at material science, too. “You can always find a way to use computer science,” he said.
Together, the students learned how to program in the Python computer language, used different programming tools such as Jupyter Notebook, which allowed them to share coding documents, and listened to scientists across disciplines discuss computer science in their work.
Teaching coding requires teaching how to think like a computer, said Tommy Marrinan, a postdoctoral appointee at Argonne, another key player at the camp. “Humans have a lot of intuition and inferencing capabilities. Computers are explicit,” said Marrinan.
It is important to keep the problems challenging, but not so hard that the students want to quit, he said.
The week included daily speakers from cross-functional areas such as Argonne’s Cyber Operations, Analysis and Research (COAR) team as well as Scott Collis, an atmospheric scientist working with the ARM Climate Research Facility, and Dan Goldberg, a postdoctoral appointee in the laboratory’s Energy Systems division. Argonne’s undergraduate summer interns also joined, offering “near-peer” opportunities that help kids stay connected, noted Bruozas. (The interns were funded by the DOE’s Office of Science and Office of Environmental Management.)
As the students toured Argonne’s supercomputers Theta and Mira and their data visualization partner Cooley, the Coding Camp team stressed that without visualization, data analysis remains incomplete.
On the final day, students programmed Lego Mindstorms robots, equipped with touch and light sensors, to navigate two mazes.
The goal is that these students will go back to their schools and talk up coding with their co-students, one way that Argonne outreach programs can engage more students to fill the national need for computer scientists, Bruozas said.
The Argonne Leadership Computing Facility provides supercomputing capabilities to the scientific and engineering community to advance fundamental discovery and understanding in a broad range of disciplines. Supported by the U.S. Department of Energy’s (DOE) Office of Science, Advanced Scientific Computing Research (ASCR) program, the ALCF is one of two DOE Leadership Computing Facilities in the nation dedicated to open science.
Argonne National Laboratory seeks solutions to pressing national problems in science and technology. The nation's first national laboratory, Argonne conducts leading-edge basic and applied scientific research in virtually every scientific discipline. Argonne researchers work closely with researchers from hundreds of companies, universities, and federal, state and municipal agencies to help them solve their specific problems, advance America's scientific leadership and prepare the nation for a better future. With employees from more than 60 nations, Argonne is managed by UChicago Argonne, LLC for the U.S. Department of Energy's Office of Science.
The U.S. Department of Energy's Office of Science is the single largest supporter of basic research in the physical sciences in the United States and is working to address some of the most pressing challenges of our time.