Submit a Job on Theta

The queuing system used at ALCF is Cobalt. On Theta, Cobalt jobs may run either as script jobs or interactive mode jobs.

In the script method, Cobalt will execute a user-supplied script when running a user’s job. All scripts on Theta must have their execute bit set, and must be able to run on a standard x86_64 architecture. Following are the required flags to qsub, as well as some of the more common options. A complete list of options may be found as a part of the qsub manpage, available on any login node.

Note: Remember to give all options before the executable name.

See Submitting to Specific Nodes below to see the difference between KNL and GPU node location specifications. Users will need an allocation on ThetaGPU to utilize the GPU nodes. Request for an allocation by filling out this form: Allocation request. ThetaGPU is listed under Theta on the form.

To run an “interactive mode” job on ALCF Cray resources, add the “-I” flag or “--mode interactive” to your qsub line and omit any executable. Your qsub submission will then wait until nodes are allocated to your job and Cobalt will start a shell on a job-launch node on your behalf. You may aprun against your assigned resources and run other interactive commands from this node. It is important to note that your shell is executed from a launch node and not from your compute head-node. Once your allocation ends, all apruns will be terminated, but your shell will remain for any cleanup actions that you choose to take.

Users may run an “ensemble job” and combine runs into a single script. This can provide major enhancements to throughput, especially for large ensemble jobs. Users may run multiple jobs in sequence or may use multiple backgrounded apruns to subset their resources among multiple backend executables. There is a system limitation of 1000 simultaneous apruns per Cobalt script job.

Queue names and operations are described on the Job and Queue Scheduling for Theta page.

Queue and scheduling policies can be found on the Queue and Scheduling Policy page.

You can find active project names that your account is associated with by running the command:

If an account is associated with more than one project, a job must be submitted by using a specific project name using -A or by setting the environment variable COBALT_PROJ.

Submitted Job with the Wrong Arguments

If you submit a job with the wrong arguments, you can modify without deleting it and resubmitting it. Most settings can be changed using qalter.

Note: To change the queue, use qmove.

To hold a job (prevent from running), use qhold. This will put the job in the "user_hold" state.

To release a job in a user hold (user_hold) state, use qrls.

A job may also be put into a user hold immediately upon submission by passing qsub the -h flag.

For jobs in the dep_hold or dep_fail state, see the section on job dependencies.

Jobs in the state admin_hold may be released only by a system administrator.

Jobs may temporarily enter the state maxrun_hold if the user has reached the limit of per-user running jobs in a particular queue. No action is required; as running jobs complete, jobs in the maxrun_hold state will be automatically changed back to queued and eligible to run.

Note: In the event any of the dependencies do not complete successfully (nonzero exit status), the job will instead go into the state dep_fail. To manually release a job that is in either dep_hold or dep_fail:

or alternatively change the job's dependencies setting to “none”:

Customizing the Output of Qstat

Default fields displayed by the qstat command may be changed by setting the QSTAT_HEADER environment variable.

One may specify column headers via the --header flag to qstat.

Available field names can be seen by entering "qstat -fl <jobid>" for any current jobid.

The sbank database is updated hourly. This means transactions against your account can take up to an hour before they show up.

Sometimes the scheduler will try to clear up room for a large job. During these times, although not many jobs may be running, new jobs are not being scheduled as expected.

At such times, backfill nodes may be available. While nodes are being drained for a larger job, other user jobs may be backfilled onto these resources, provided that their requested wall time is less than the remaining drain time of the set of resources. For instance, suppose that 16 nodes are being drained to allow a 16-node job to run. Of the 16 nodes, perhaps eight are empty and the other eight are running an eight-node job that has 2 hours of wall time left. This allows the opportunity to run a 2-hour, eight-node job in the backfill here.

In this example, a four-node job with a maximum wall time of 4 hours and 59 minutes can be run during this backfill. The backfill times will not always be identical and will depend on the mix of jobs on the partitions that are being drained.

In rare cases, there may be a need to target specific hardware. This may be accomplished using "--attrs location=".

This will force the job to run on those specific nodes. Should that location become unschedulable, for instance, due to a failed node, the job will not be allowed to run anywhere else, without resetting the location attribute. If more nodes are specified in the location field than are required to fill a job’s requested node count, then the first n nodes available in the location set will be used.

Running with a Group of Users

Sometimes it is useful to allow other users to run Cobalt commands on a given job such as qhold, qrls, or qdel. A list of users can be allowed to run commands on your job by submitting a list of users to qsub, cqsub, or qalter using the flag --run_users. Specified users need not be in the same project under which the job was submitted.

As a convenience, all users belonging to the project under which a job was submitted can be added to a list of users that may control a job by using the --run_project flag.

Users who have been added to the list can run any command that the job-submitter could run on a job. This includes qhold, qrls, qalter, and qdel.

While setting this list of users allows any of the listed users to run Cobalt commands on a job, it does not do anything about the permissions of any files involved with the job. Those must be handled by the user(s) setting appropriate permissions on their directories to allow users in their group to read and write files as appropriate. If your project needs a group on the file system to share files or a user needs to be added, email User Support.

For more information on Cobalt commands, their options, consult the manpages on the system. The same information may be found online in the Cobalt Command Reference.

Use qsub to submit a job. (Unlike jobs on the ALCF BlueGene systems, all jobs on Theta are either script or interactive.)

Run the script jobscript.sh with 10 nodes for a maximum of 15 minutes:

To submit jobs to a particular queue, use qsub -q <queue_name>.

To run jobscript.sh with 10 nodes for a maximum of 30 minutes in the debug queue for flat memory mode and quad numa mode:

Charge a Job to a Project

Use qsub -A <project_name> to charge a job to a particular project.

To run jobscript.sh with 10 nodes for a maximum of 15 minutes and charge the job to MyProject:

To see which projects you are a member of:

You can use the environment variable “COBALT_PROJ” to set your default project. qsub -A takes precedence over COBALT_PROJ.

Delete a Job from the Queue

To delete a job from the queue, use the qdel command. For example for job with ID of 34586

Depending on the stage of a job’s lifetime, qdel may not complete immediately, especially if the delete is issued during startup on a job that is changing memory modes and rebooting a node. If the job does not ultimately terminate, contact support@alcf.anl.gov with the jobid so that an administrator can take appropriate cleanup actions and administratively terminate the job.

To determine which partitions are currently available to the scheduler, use the nodelist command. This command provides a list of node ids, names, queue, and state as well as any backfill windows. 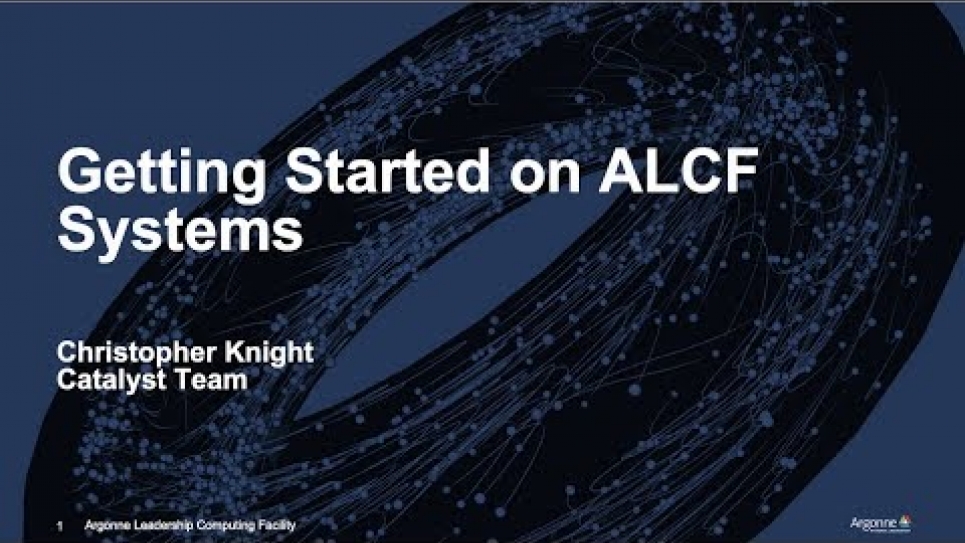