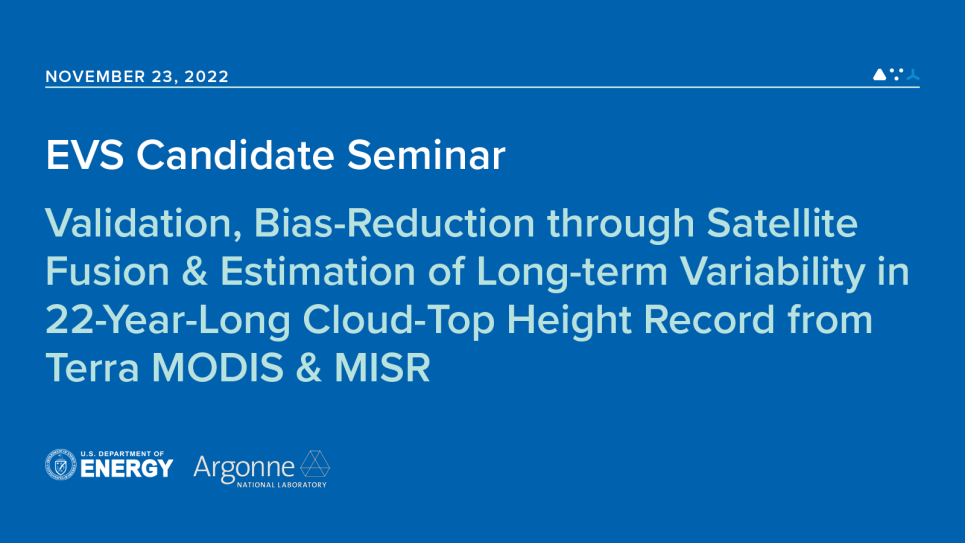 Clouds contribute the largest uncertainty in modeled responses to climate change, leading to quantitative disagreements in the modeled estimates of cloud amounts (CA), cloud-top heights (CTH) and cloud opacity variabilities. However, there is robust agreement between qualitative aspects of modeled cloud responses, such as rising high-topped clouds, expanding subtropical highs and poleward extrusion of midlatitude storm tracks. Since the response in global CTH is the most robust of such responses, accurate estimation of long-term variability in the vertical distribution of global CTH is important for reducing climate modeling uncertainty. Our longest records of global CTH from a satellite in a stable orbit come from the 22-year (2000-2021) record of the Multiangle Imaging Spectroradiometer (MISR) and the Moderate Resolution Imaging Spectroradiometer (MODIS), on board the Terra satellite.

One of the goals of this work was to ensure that the Terra record of vertical variability of cloud properties have uncertainties that are well-characterized for the present and future studies on the Earth’s climate. This work thus begins with quantifying MISR and MODIS CTH error characteristics vis-à-vis cloud geometrical and optical properties, through the first direct, semi-global comparison against a space-based lidar (ISS-CATS). In this work, we establish that MISR and MODIS records of CTH are highly accurate and precise for climate analyses, we close the MISR CTH error budget and establish that scenes with 2-layered clouds topped by a thin cirrus over thicker low clouds lead to the most significant disagreements between the two sensors. With the uncertainties in MISR and MODIS CTH records better quantified, we studied long-term variability (over the Terra climate record) in MISR and Terra-MODIS cloud amounts as function of cloud altitude and cloud opacity. With this analysis, we establish that robust modeled responses of clouds to climate change are, in fact, occurring in nature, but the inability of MISR and MODIS to separate CA, CTH and cloud opacity changes over regions of large-scale cloud overlap (e.g., tropical oceans) pose serious observational challenges towards analyzing these trends.

As multi-layered clouds constitute ~30% of global cloud cover, we conceptualize and implement a MISR+MODIS fusion algorithm to improve the accuracy of high-cloud CTH and emissivities in 2-layered scenes. Relative to collocated ISS-CATS data, our new algorithm improves high cloud CTH and emissivity accuracies by ~75% compared to standard MODIS products. This leads to significant improvements in our estimates of modeled longwave radiative effect of clouds in multi-layered scenes. Owing to its large radiative impact, we suggest scaling our algorithm over the 20-year Terra record, which will lead to a unique 2-layered cloud climatology from a morning orbit and refined estimates of CTH variability.