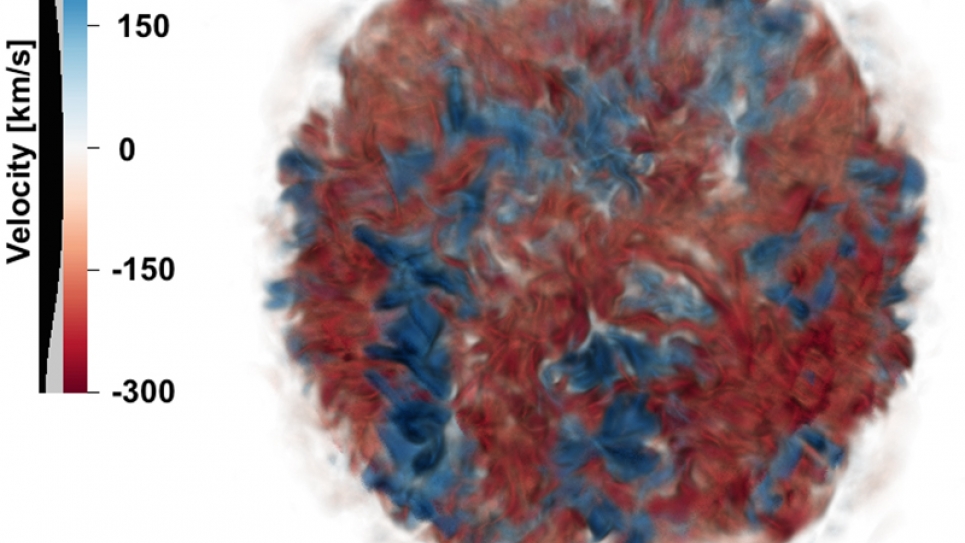 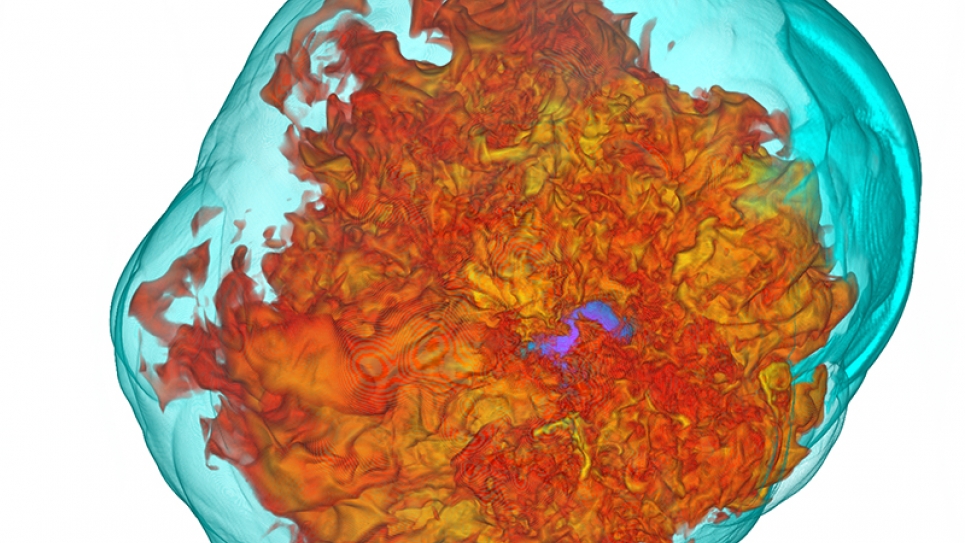 Researchers from Michigan State University are using Mira to perform large-scale 3D simulations of the final moments of a supernova’s life cycle. While the 3D simulation approach is still in its infancy, early results indicate that the models are providing a clearer picture of the mechanisms that drive supernova explosions than ever before.

In the landmark television series “Cosmos,” astronomer Carl Sagan famously proclaimed, “we are made of star stuff,” in reference to the ubiquitous impact of supernovas.

At the end of their life cycles, these massive stars explode in spectacular fashion, scattering their guts—which consist of carbon, iron, and basically all other natural elements—across the cosmos. These elements go on to form new stars, solar systems, and everything else in the universe (including the building blocks for life on Earth).

Despite this fundamental role in cosmology, the mechanisms that drive supernova explosions are still not well understood.

“If we want to understand the chemical evolution of the entire universe and how the stuff that we’re made of was processed and distributed throughout the universe, we have to understand the supernova mechanism,” said Sean Couch, assistant professor of physics and astronomy at Michigan State University.

To shed light on this complex phenomenon, Couch is leading an effort to use Mira, the Argonne Leadership Computing Facility’s (ALCF’s) 10-petaflops supercomputer, to carry out some of the largest and most detailed 3D simulations ever performed of core-collapse supernovas. The ALCF is a U.S. Department of Energy (DOE) Office of Science User Facility.

After millions of years of burning ever-heavier elements, these super-giant stars (at least eight solar masses, or eight times the mass of the sun) eventually run out of nuclear fuel and develop an iron core. No longer able to support themselves against their own immense gravitational pull, they start to collapse. But a process, not yet fully understood, intervenes that reverses the collapse and causes the star to explode.

“What theorists like me are trying to understand is that in-between step,” Couch said. “How do we go from this collapsing iron core to an explosion?”

Through his work at the ALCF, Couch and his team are developing and demonstrating a high-fidelity 3D simulation approach that is providing a more realistic look at this “in-between step” than previous supernova simulations.

While this 3D method is still in its infancy, Couch’s early results have been promising. In 2015, his team published a paper in the Astrophysical Journal Letters, detailing their 3D simulations of the final three minutes of iron core growth in a 15 solar-mass star. They found that more accurate representations of the star’s structure and the motion generated by turbulent convection (measured at several hundred kilometers per second) play a substantial role at the point of collapse.

“Not surprisingly, we’re showing that more realistic initial conditions have a significant impact on the results,” Couch said.

Despite the fact that stars rotate, have magnetic fields, and are not perfect spheres, most 1D and 2D supernova simulations to date have modeled non-rotating, non-magnetic, spherically symmetric stars. Scientists were forced to take this simplified approach because modeling supernovas is an extremely computationally demanding task. Such simulations involve highly complex multiphysics calculations and extreme timescales (the stars evolve over millions of years, yet the supernova mechanism occurs in a second).

According to Couch, working with unrealistic initial conditions has led to difficulties in triggering robust and consistent explosions in simulations—a long-standing challenge in computational astrophysics.

However, thanks to recent advances in computing hardware and software, Couch and his peers are making significant strides toward more accurate supernova simulations by employing the 3D approach.

The emergence of petascale supercomputers like Mira has made it possible to include high-fidelity treatments of rotation, magnetic fields, and other complex physics processes that were not feasible in the past.

“Generally when we’ve done these kinds of simulations in the past, we’ve ignored the fact that magnetic fields exist in the universe because when you add them into a calculation, it increases the complexity by about a factor of two,” Couch said. “But with our simulations on Mira, we’re finding that magnetic fields can add a little extra kick at just the right time to help push the supernova toward explosion.”

Advances to the team’s open-source FLASH hydrodynamics code have also aided simulation efforts. Couch, a co-developer of FLASH, was involved in porting and optimizing the code for Mira as part of the ALCF’s Early Science Program in 2012. For his current project, Couch continues to collaborate with ALCF computational scientists to enhance the performance, scalability, and capabilities of FLASH to carry out certain tasks. For example, ALCF staff modified the code for writing Hierarchical Data Format (HDF5) files that sped up I/O performance by about a factor of 10.

But even with today’s high-performance computing hardware and software, it is not yet feasible to include high-fidelity treatments of all the relevant physics in a single simulation; that would require a future exascale system, Couch said. For their ongoing simulations, Couch and his team have been forced to make a number of approximations, including a reduced nuclear network and simulating only one eighth of the full star.

“Our simulations are only a first step toward truly realistic 3D simulations of supernova,” Couch said. “But they are already providing a proof-of-principle that the final minutes of a massive star evolution can and should be simulated in 3D.”

The team’s results were published in Astrophysical Journal Letters in a 2015 paper titled “The Three-Dimensional Evolution to Core Collapse of a Massive Star.” The study also used computing resources at the Texas Advanced Computing Center at the University of Texas at Austin.

Couch’s supernova research began at the ALCF with a Director’s Discretionary award and now continues with computing time awarded through DOE’s Innovative and Novel Computational Impact on Theory and Experiment (INCITE) program. This work is being funded by the DOE Office of Science and the National Science Foundation.