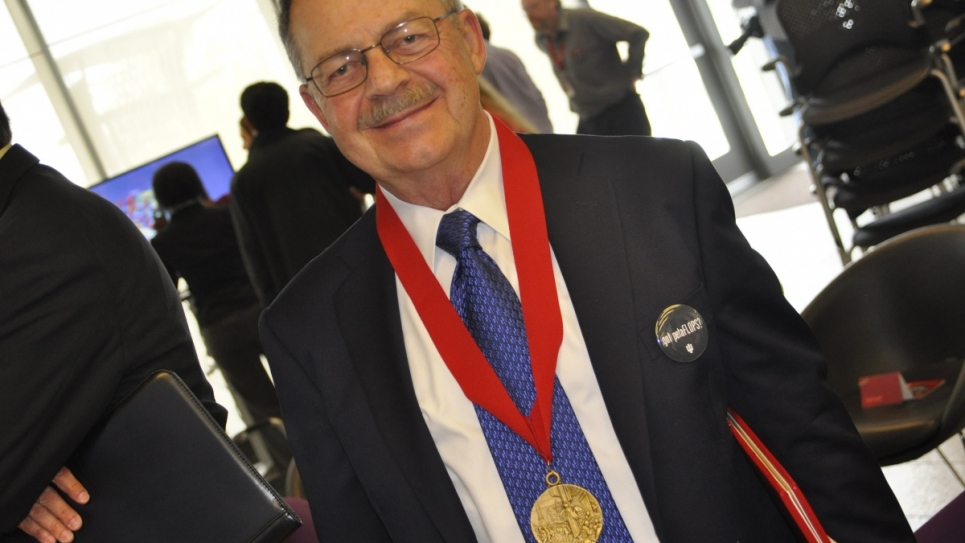 Recognized for his significant contributions to high-performance computing, Paul Messina, Director of Science at the Argonne Leadership Computing Facility (ALCF), was recently honored with a Thomas Hart Benton Mural Medallion from Indiana University.

“Throughout your distinguished career, your work helped lay the foundation for grid and cloud computing, and helped bring parallel computing technology to the forefront of scientific computing,” said Indiana University president Michael McRobbie as he presented the medallion to Messina on April 26 at the university’s dedication ceremony for its new supercomputer, Big Red II. Messina was the keynote speaker at Big Red II’s unveiling event.

The bronze Thomas Hart Benton Mural Medallion recognizes individuals who embody the values of the university and the universal academic community.

As the ALCF’s Director of Science, Messina oversees a wide variety of projects that leverage the ALCF’s supercomputers to accelerate scientific and engineering breakthroughs in many fields.

Additionally, Messina served as Director of the Concurrent Supercomputing Consortium, where he helped bring together 13 institutions, including government agencies and industry, to pool their resources to gain access to unique computational facilities. This effort resulted in the Intel Touchstone Delta system, which was the world’s most powerful scientific supercomputer for nearly two years.

Messina’s roots at Argonne date back to 1973. Before assuming many of the aforementioned roles, Messina held numerous positions at the laboratory until 1987, including being the founding Director of Argonne’s Mathematics and Computer Science Division.