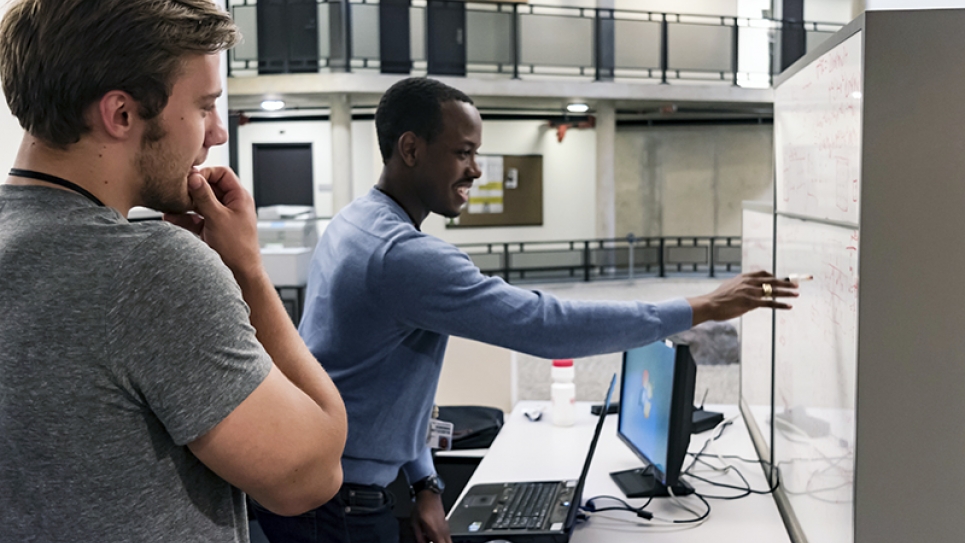 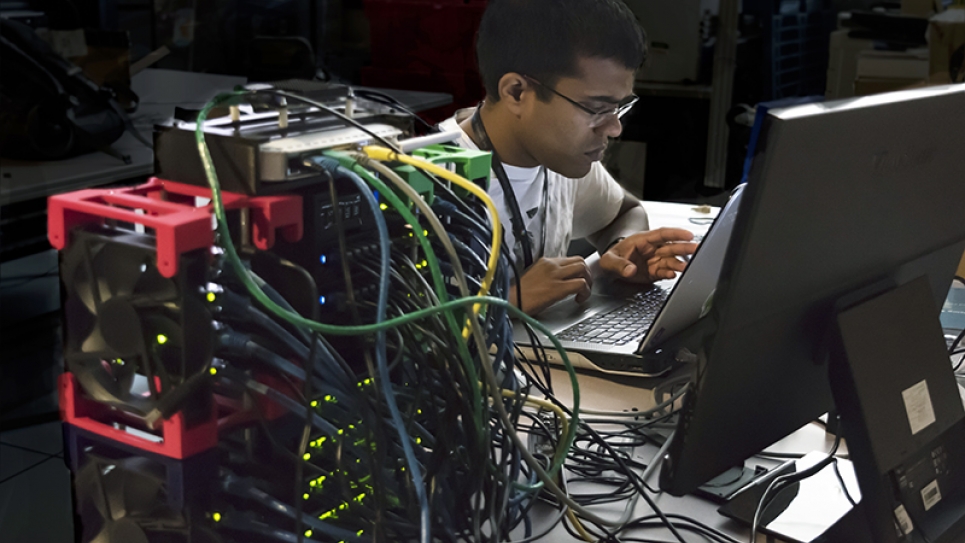 “My background in applied math and fluid mechanics was very extensive, but much less so in pure computer science and parallel programming,” says Hoskin, a master’s student in Massachusetts Institute of Technology’s Aerospace Computational Engineering program. “I am now more well-rounded and have the ability to understand and analyze more complex commercial computational fluid dynamics codes.”

His project focused on the performance of a parallel 2D Navier-Stokes flow solver, which calculates the atmospheric forces on an object. This tool is used to model aircraft performance, providing engineers with information on how much fuel is needed, or how much weight could be carried.

Hoskin’s internship, through Argonne National Laboratory’s Research Aide program, paired him with his mentor Ramesh Balakrishnan, a computational scientist at the ALCF.  Together they developed a new approach for calculating boundary conditions that could provide new insights.

“Dealing with boundary conditions is usually the most difficult part of writing a numerical partial differential equations solver,” Hoskin says.

Hoskin was one of 22 students from universities around the country that spent their summer at the ALCF, tackling a wide variety of projects that covered everything from HPC system administration and data analytics to computational science and performance engineering. Every summer, the facility solicits student project proposals from staff members who are interested in mentoring. The program culminates with a special symposium in which the students present their project results.

“There are many benefits to our summer student program,” says ALCF Director Michael Papka, who is also a professor at Northern Illinois University (NIU). “Students get exposed to a national laboratory and the work that goes on here. They also get an experience that they may not see in the classroom, like working to address real-world problems and learning to collaborate as part of a team.

Papka mentored multiple students this summer, including Bhaskar Mandapaka who recently obtained a master’s in computer science from NIU. Mandapaka spent his time at the facility constructing an 80-watt supercomputer that will be used as an outreach tool for the ALCF.

“With a system like this, we can talk about the various components of HPC and, in time, continue to develop add-ons that allow us demonstrate how heat is generated, how power draw is increased, and how code needs to be developed to support parallel environments,” Papka explains. “My hope is that the system can be deployed in the control room for demonstration purposes and become an educational tool to showcase the various computer sciences that are done on a daily basis at ALCF.”

Made out of 17 Parallella boards (credit-card-sized computers), Mandapaka’s system retained a number of the components that supercomputers like Mira and Theta have but on a much smaller scale. He used 3D printing to create racks for his tiny but powerful machine. Once the system was built, he ran benchmarks and simple applications to assess and demonstrate its capabilities.

“At NIU, I learned a lot about parallel computing and applications, but here I gained valuable experience in a real working environment,” says Mandapaka.

Another student project involved implementing a data-staging feature to Cobalt, a HPC job management suite used at the ALCF. To tackle this software challenge, Yuping Fan, PhD candidate in computer science at Illinois Institute of Technology, worked closely with mentors Paul Rich and Bill Allcock from the ALCF’s operations team.

She helped develop a general framework for Cobalt that can make integration of multiple data dimensions easier and more consistent. This data-staging functionality will benefit ALCF users by adding a command line option that allows them to transfer files and then run jobs automatically.

“This opportunity really showed me the value of working in a team,” Fan says. “It is different from doing course projects, because most of those projects require students doing independent work. Although I wrote all the code, I took advice from my mentors and the people around me when I encountered problems.”

Students participating in Argonne’s Research Aide program were supported by the ALCF and the DOE Office of Science.