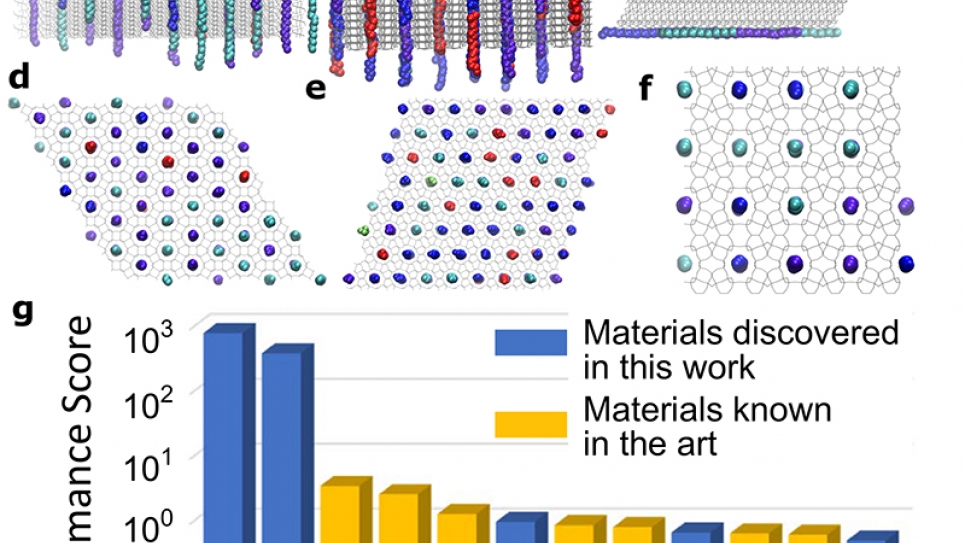 With access to supercomputing resources at the Argonne Leadership Computing Facility (ALCF), a U.S. Department of Energy (DOE) Office of Science User Facility, a research team from the University of Minnesota and Rice University has demonstrated a predictive modeling capability that can help accelerate the discovery of new materials to improve biofuel and petroleum production.

The findings, recently published in Nature Communications, present a tool that could lead to more efficient processes in the biofuel and petrochemical industries, while reducing the time and cost of associated laboratory research and development efforts.

The materials of interest are called zeolites, which are used as both molecular sieves and catalysts to help make fuels and chemical feedstocks. To date, more than 200 types of zeolites have been synthesized and more than 330,000 potential zeolite structures have been predicted based on previous computer simulations.

With such a large pool of candidate materials, using traditional laboratory methods to identify the optimal zeolite for a particular job presents a time- and labor-intensive process that could take decades.

That’s why scientists from the University of Minnesota and Rice University are developing computational tools that can quickly screen thousands of materials to pinpoint promising candidates for further research and development.

“Using Mira, we are able to use our computer simulations to compress decades of research in the lab into a total of about a day’s worth of computing,” said Ilja Siepmann, a University of Minnesota chemistry professor and director of the DOE-funded Nanoporous Materials Genome Center.

The researchers gained access to Mira through the ALCF’s Director’s Discretionary program. ALCF assistant computational scientist Chris Knight worked closely with the team to ensure optimal performance on the ALCF supercomputer. A co-author on the Nature Communications article, Knight assisted in porting their MCCCS-MN code to Mira, guided the developers in adding OpenMP support to permit hybrid MPI/OpenMP parallelism, and helped design an MPI-based framework to allow high-throughput calculations capable of using all of Mira’s 786,432 cores.

“This project is a great example of how ALCF staff can collaborate with research teams to address the challenges of using such a large computational resource to enable the exploration of new scientific problems,” Knight said.

The code performance enhancements allowed Siepmann and his team to carry out simulations for two zeolite applications of industrial relevance. For one study, they looked for zeolites that could improve the purification of ethanol from fermentation broths. The simulations pointed them to a zeolite with a pore/channel system that effectively accommodates ethanol molecules while discouraging hydrogen bonding with water molecules. With the ability to purify ethanol in a single separation step, this material displays the potential to replace an energy-intensive, multi-step distillation process currently used by industry. To validate the simulation results, University of Minnesota researchers synthesized and tested the promising zeolite, providing experimental data that was in very good agreement with the predictions.

For the second study, the team investigated potential zeolite catalysts for a dewaxing process called hydroisomerization, in which linear long-chain alkanes are transformed into slightly branched alkanes to reduce the pour point and increase the viscosity of lubricant oils and other fuel products. Their simulations identified zeolites with up to 100 times better adsorption capability than current technology used for this process.

“In both cases, the simulations led us to the identification of zeolites that could possibly improve the efficiency of operations for industry,” Siepmann said. “Our findings demonstrate how advanced computational screening methods can be used to increase the speed of materials discovery.”

The vast amount of data generated for this effort will be made publicly available through the Nanoporous Materials Explorer, an application that is part of the DOE-funded Materials Project.

This research received financial support through a Predictive Theory and Modeling award from DOE’s Office of Science, which also provided support for the computing time at ALCF.