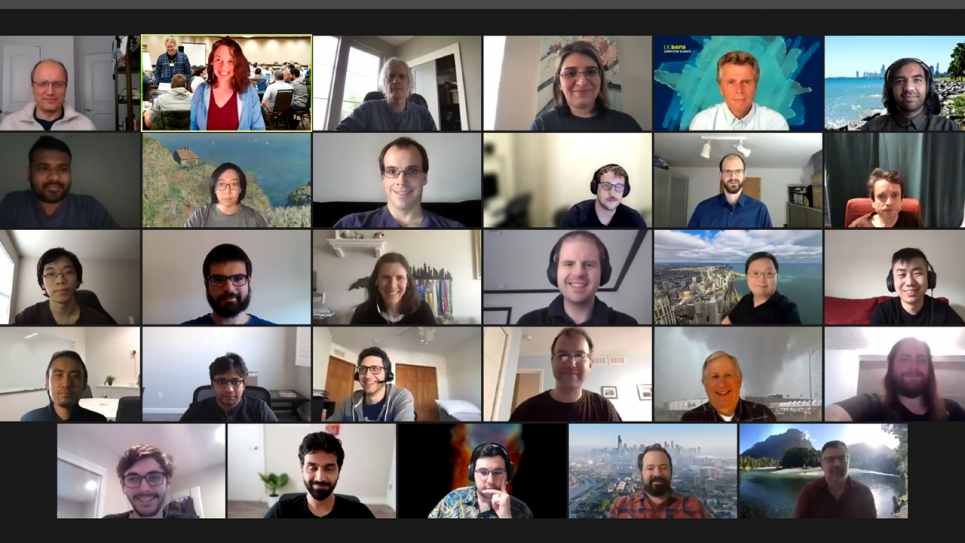 The ALCF-NVIDIA GPU Hackathon hosted 15 teams to help them get their applications running efficiently on ThetaGPU. (Image: Argonne National Laboratory)

As the Argonne Leadership Computing Facility (ALCF) continues its transition to deploying and operating supercomputers powered by graphics processing units (GPUs), training researchers to use the powerful new resources for science is becoming increasingly important.

Last year, the facility expanded its Theta supercomputer with GPUs to provide a dedicated resource for COVID-19 research as well as enhanced capabilities for artificial intelligence and deep learning studies. Known as ThetaGPU, the system has now been opened up to the broader research community. Looking ahead, the ALCF will continue to add GPU-accelerated machines to its stable of supercomputers with the Polaris system expected later this year and the Aurora exascale system set to arrive in 2022.

“GPU-accelerated systems are a relatively new thing for the ALCF user community,” said ALCF computational scientist Yasaman Ghadar, who helps lead the facility’s training events. “One of our goals as a facility is to teach researchers how our resources can be used to advance their science. We want people to be able to run their applications efficiently because their success is our success.”

The facility’s virtual workshops and training programs help fulfill this need by uniting researchers and application developers through collaborative hands-on sessions, guidance on using the latest high-performance computing (HPC) hardware and software, and access to its leadership-class supercomputers for code testing and optimization efforts.

The ALCF recently held two multi-day workshops, its first-ever GPU Hackathon and the annual ALCF Computational Performance Workshop. Both events were designed to connect attendees with staff and industry experts to help them improve application performance on ALCF systems. The ALCF is a U.S. Department of Energy (DOE) Office of Science User Facility at Argonne National Laboratory. 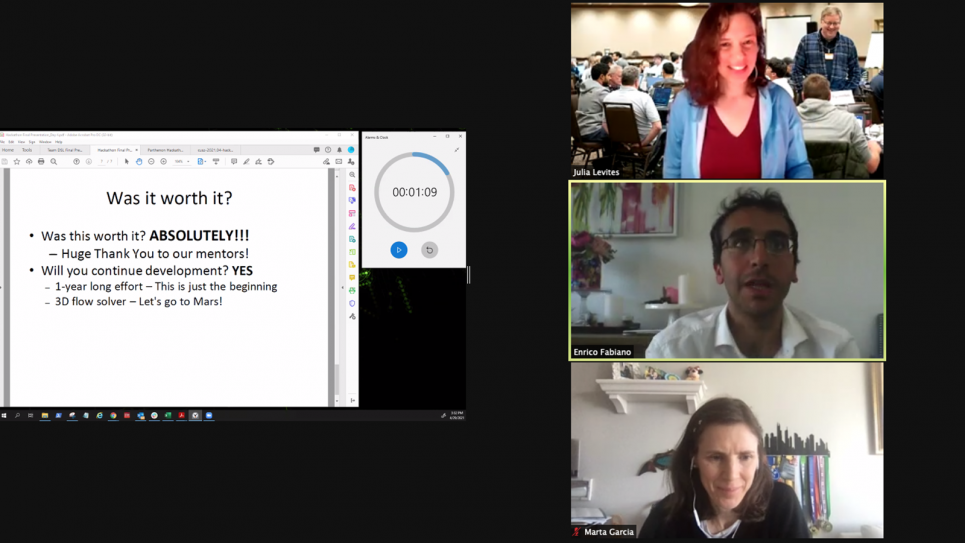 In April, the ALCF partnered with NVIDIA to host the GPU Hackathon, a virtual event designed to help developers accelerate their codes on ThetaGPU, which is comprised of 24 NVIDIA DGX A100 nodes, using a portable programming model, such as OpenMP, or an AI framework of their choice. With 15 teams participating, the ALCF event was NVIDIA’s largest virtual GPU Hackathon yet.

Each team was assigned mentors for the duration of the event to provide guidance on porting and optimizing their code for NVIDIA GPUs.

One of the teams that participated in the hackathon, team SIGMA, worked on a scalable remapper for climate applications. The Argonne-based team’s primary goal was to improve the current MPI-only workflow in the underlying Mesh-Oriented datABase (MOAB) library to enable multi-core and GPU computations. The team found that considerable GPU speedup and portability across multi-core systems and GPUs can be achieved by switching to tuned implementations using a well-tested performance portability programming ecosystem, such as Kokkos, or open-source performance portable libraries, such as ArborX.

Team SIGMA was able to achieve substantial performance improvements for several key kernels in the remapper on multi-core systems, and on GPUs for all the cases they tested. After the hackathon, the team is continuing their development work by integrating the kernels back into their production-ready, MOAB remapping workflow for DOE’s Energy Exascale Earth System Model (E3SM). E3SM is an ongoing, state-of-the-science Earth system modeling, simulation, and prediction project designed to help scientists better understand how earth system processes interact today and how they may evolve in the future.

"The hackathon allowed us to get some diverse, new applications up and running on Theta's GPU nodes," said Kevin Harms, ALCF performance engineering team lead and a hackathon mentor. "As a mentor for team SIGMA, we were able to hunker down and get a considerable amount of work done in a just few days. The team can now leverage another powerful computing resource to advance their development of E3SM."

Team CRUNCH also made considerable progress with their conservative physics-informed neural network (cPINN) application at the hackathon. Their main objective was to profile cPINN on single and multi-node environments, find the bottlenecks, and optimize its performance for modeling large eddy simulations encountered in the field of computational fluid dynamics. The team updated their code to use the mpi4py and TensorFlow libraries. After several rounds of profiling and optimizations, they achieved excellent scalability on up to 128 GPUs (16 nodes).

"The hackathon was a great experience and with the mentors’ help, I was able to speed up my code substantially. I learned a lot about profiling our code in terms of GPU usage,” said Khemraj Shukla, assistant professor of applied mathematics at Brown University and member of team CRUNCH. “After the hackathon, I applied for Director’s Discretionary allocation on the ThetaGPU machine, and I have already started using it for my other projects.” 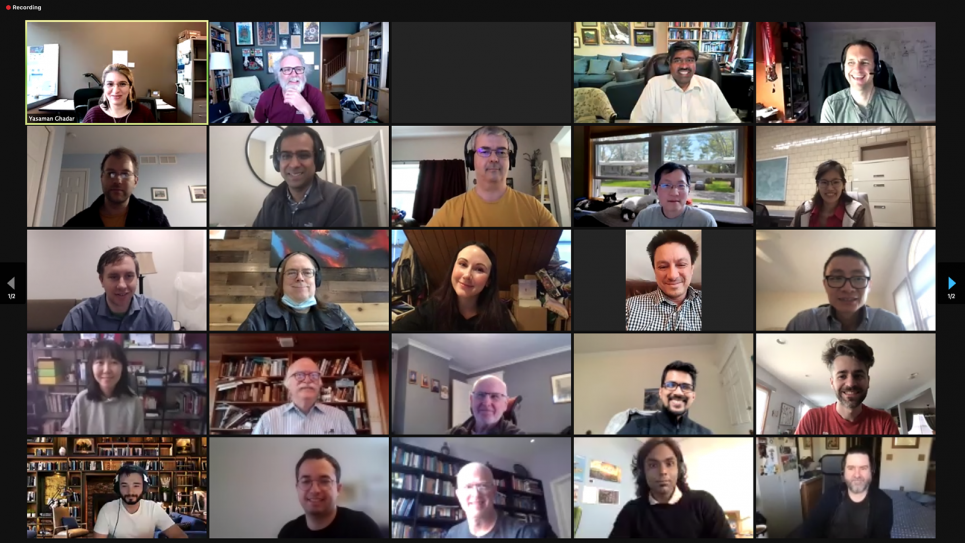 In May, the ALCF hosted 117 attendees for its virtual Computational Performance Workshop. The annual event is designed to help researchers boost application performance and achieve computational readiness on ALCF systems in preparation for major allocation awards through DOE’s Innovative and Novel Computational Impact on Theory and Experiment (INCITE) program, the ASCR Leadership Computing Challenge (ALCC), and the ALCF Data Science Program (ADSP). Participants worked with ALCF and industry professionals through collaborative online sessions, and benchmarked and debugged their applications with exclusive reservations on ALCF computing systems.

“Our workshop participants typically come in with an idea of the science they want to pursue at the ALCF, but they need technical help to optimize their application and getting it running efficiently on our machines,” Ghadar said.

“The interaction is what I loved the most about the workshop,” Ivan said. “Being able to ask questions, interact, discuss, and learn more about the particular systems in a friendly conversation was a big takeaway for me. There are obviously lots of technical details and specific techniques that you learn, but I think it is always nice to have that close interaction.”

Ivan and his team also sought to increase their understanding of Argonne’s upcoming exascale machine, Aurora, so they could begin preparing their code, Blob (Balance, Law, and Bargain), for next-generation systems.

“It was very useful in the sense that now I can make some design choices of how I am going to develop the application I am working on,” Ivan said. “As a consequence of the workshop, I immediately applied for discretionary allocation so we can further develop our code.”