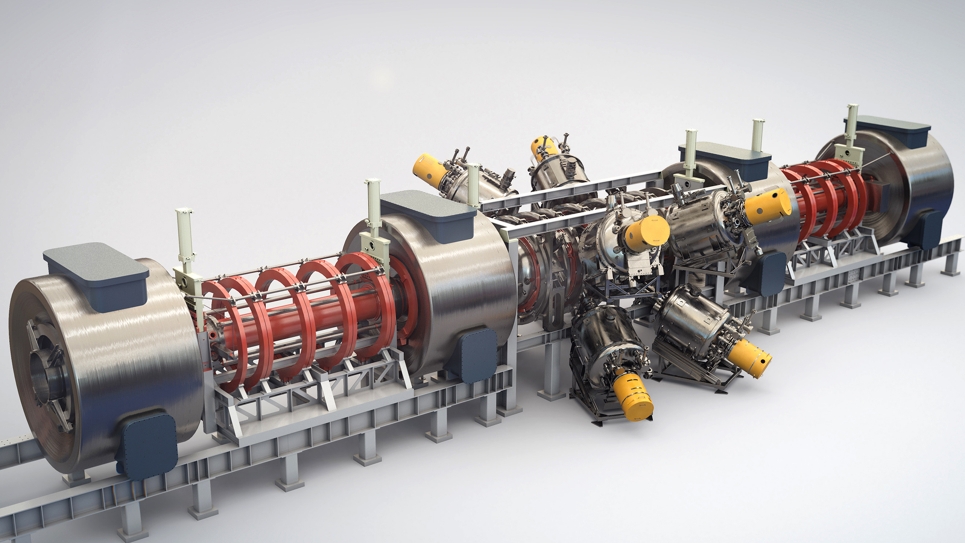 Rendering of TAE Technologies’ magnetic fusion plasma confinement device “Norman." ALCF simulations are helping to describe the dynamics of plasma inside the magnetic field and the way in which heat is confined in the system. (Image: TAE Technologies)

Scientists at TAE Technologies are performing simulations on the ALCF's Theta supercomputer to accelerate the company's experimental fusion research program.

“So that’s our problem,” notes Sean Dettrick, director of computational sciences at TAE Technologies. ​“How do we get plasma hot enough to enable a fusion reaction to occur?”

If you’re the sun, you do it with immense gravitational pressure and a thermal engine that can generate temperatures of 27 million degrees F.

If you’re TAE, you develop a succession of magnetic fusion plasma confinement devices as a means to generate unlimited electricity; a technology that could have far-reaching implications for the nation’s energy security.

But the process requires a continual and stable source of heat, the primary research challenge that brought TAE to the U.S. Department of Energy’s (DOE) Argonne National Laboratory.

Taking advantage of the high-performance computing resources at the Argonne Leadership Computing Facility (ALCF), a DOE Office of Science User Facility, Dettrick and his colleagues are conducting large-scale simulations to understand how plasma loses heat to turbulent fluctuations in the confinement space, and inform the design of a future prototype reactor.

“As we develop each prototype, we learn some new physics and then build enhanced machines that allow us to explore the physics better,” says Dettrick. 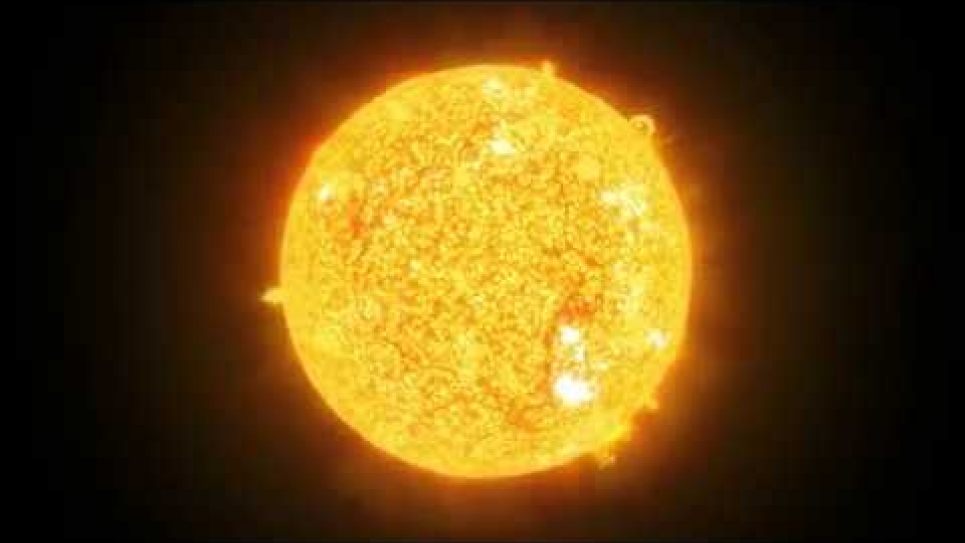 After performing computational studies at several other supercomputing facilities, the TAE team found that the memory hierarchy and threading multi-core architecture of ALCF’s supercomputer Theta was better suited to its algorithms, notes Calvin Lau, a computational plasma physicist at TAE.

Dettrick and Lau are applying those benefits to simulations that describe both the dynamics of the plasma inside the magnetic field, and the way in which heat is confined — and potentially lost — in the system.

“This is a multiscale physics problem and this group is tackling it with a hierarchy of codes,” says Elise Jennings, an ALCF computational scientist. ​“We helped them realize the code enhancements and optimizations that are needed to resolve very small-scale turbulent fluctuations in the plasma and ensure it agrees with results from the global stability code.”

Global stability describes how the plasma moves around inside the magnetic field and how that movement can be influenced by external actuators, like the neutral particle beams, and can change the shape of the magnetic fields.

“Norman” works by generating a magnetic field that confines a hydrogen plasma. Beams made of neutral high-energy particles are injected into that plasma to begin a heating process that will eventually take the plasma to billions of degrees Fahrenheit. 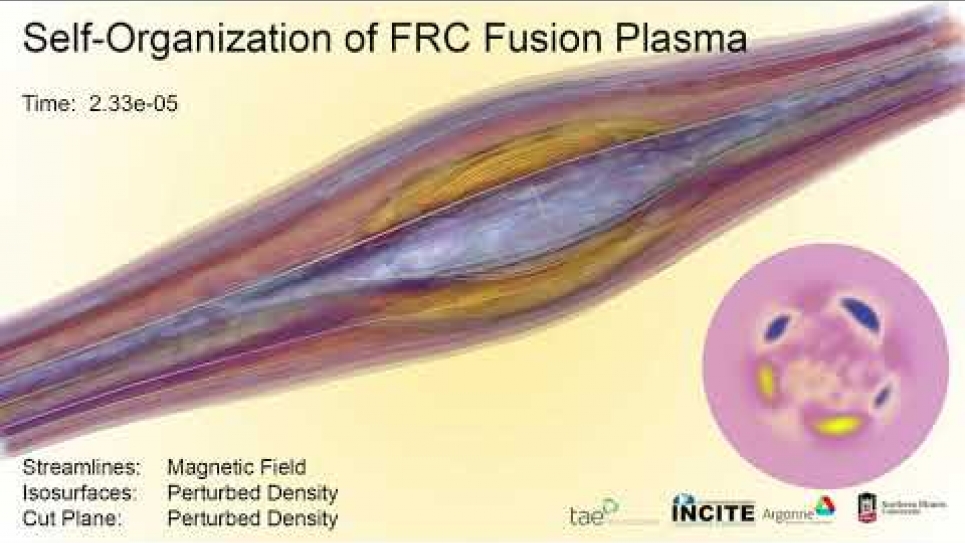 If it gets hot enough and dense enough, the fusion reaction releases about 10 MeV of energy in the process — energy that can be extracted and used for larger-scale energy production.

But, the stability of the plasma and the ability to maintain the intense heat required to keep the thermal engine revving are issues that TAE must overcome.

For another set of simulations on Theta, Lau is using large-scale, first principles codes that he developed in collaboration with researchers at the University of California, Irvine, to understand the microscopic turbulence that leads to heat losses.

“Essentially, we are investigating waves produced in the plasma that give you turbulence, which can knock out particles or heat and energy,” says Lau. ​“Not only do you want to understand how well heat and particles are confined, but how to mitigate any loss.”

Experiments with previous generations of devices showed that plasma confinement actually improves as the temperature increases, which, researchers note, is advantageous for planning a fusion reactor.

Lau has been working to find out why this happens, publishing results in a recent issue of the journal Nuclear Fusion. The article, ​“Cross-separatrix simulations of turbulent transport in the field-reversed configuration,” is an extension of earlier work that found that the mechanisms for driving turbulence exist largely outside of the core plasma.

“The core itself does not have the mechanism that produces the turbulence, so that’s the reason for the better performance inside the core plasma,” said Lau. ​“If we understand the physics behind those measurements, then we can extrapolate to a future machine.” 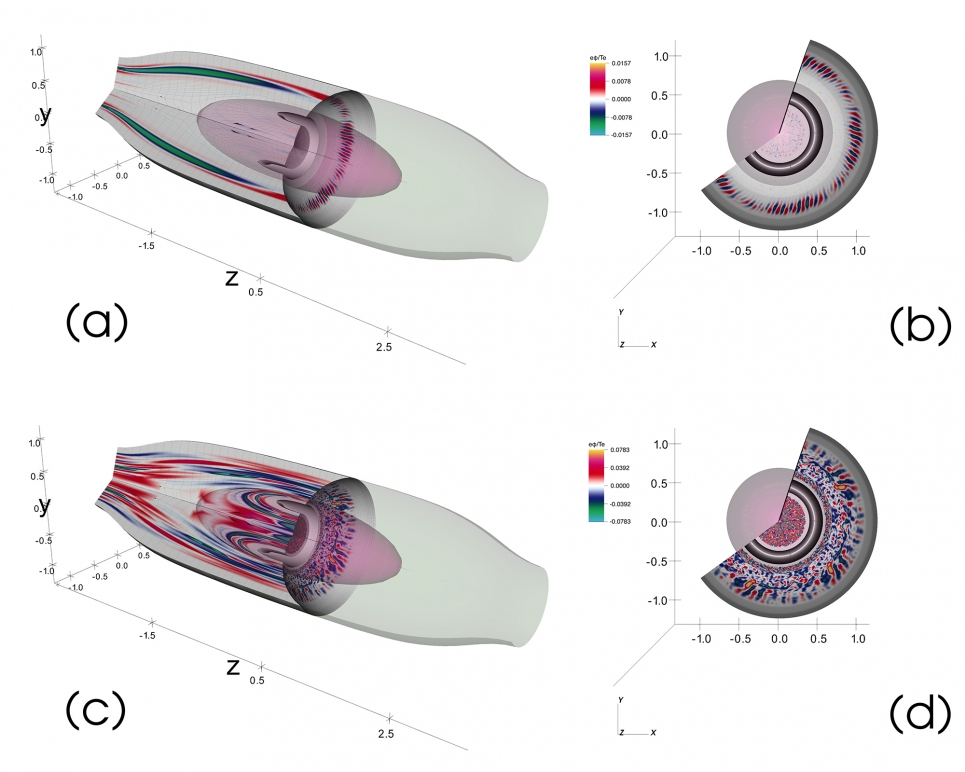 3D simulations of micro-turbulence in the field-reversed configuration performed using the ANC code on the ALCF's Theta supercomputer. Electrostatic fluctuation is shown at the exponential growing stage (a,b) and after saturation (c,d) from two different perspectives. The purple shell represents the separatrix, and the outer pale green shell represents the outer boundary of the simulation domain. In the second view (b,d), the dark ring indicates the magnetic null region which is excluded in the simulation domain; however, the inner and outer regions are still connected along the field-lines. This is more clearly seen in the first view (a,c) where the magnetic null region appears as the hollow section. (Image: Daniel Fulton, Kevin Hubbard, and Calvin Lau, TAE Technologies)

To get a better handle on the physics, the group may need more computational fire power. Currently, they are only able to simulate the confinement vessel region, which measures nearly 80 feet long and stands two stories high.

With the promise of exascale computing right around the corner and the delivery of one of the nation’s first exascale systems, Aurora, to Argonne in 2021, there is the potential for TAE to dramatically increase the domain size of the simulation.

“The sort of multiscale problems that TAE is addressing will require DOE leadership computing facilities and advanced resources, like Aurora, as the simulations scale up. The potential for scientific discovery and innovation with exascale capabilities is enormous,” says Jennings.

To keep apprised of and provide input on the latest developments in exascale, TAE maintains a strong presence on the industry council of DOE’s Exascale Computing Project (ECP), a collaboration between DOE’s Office of Science and its National Nuclear Security Administration, to deliver a capable exascale computing ecosystem. Serving as an external advisory board, the council is made up of industry leaders interested in using exascale computing capabilities to inform and accelerate their research and development efforts.

“The promise of exascale is that we can look at whole systems,” says David Martin, manager of Industry Partnerships and Outreach at the ALCF and co-executive director of the ECP Industry Council. ​“Instead of just modeling a cylinder, we model the whole engine. Instead of modeling a jet engine, we model the whole airplane. For TAE, it’s modeling the whole confinement system, bringing us another step closer to clean, unlimited energy.”