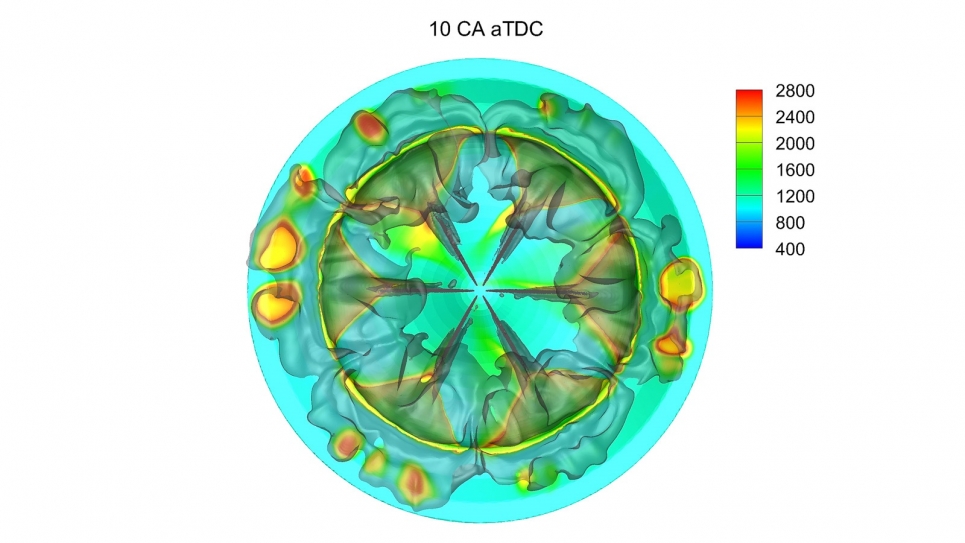 Heavy-duty diesel engines still power most large vehicles used in the construction, mining, and transportation industries in the United States. Engineers are working to improve the fuel efficiency of these engines while minimizing pollution to reduce energy consumption and ensure the sustainability of these industries in the future.

To tackle this problem, researchers at the U.S. Department of Energy’s (DOE) Argonne National Laboratory joined forces with Caterpillar Inc., one of the world’s largest manufacturers of construction and mining equipment. Taking advantage of Argonne’s high-performance computing resources, researchers developed a potential piston design for Caterpillar’s engines that could improve fuel efficiency while reducing harmful emissions.

Using this method, they were able to identify several designs that had the potential to improve fuel efficiency while reducing emissions. Caterpillar created prototypes of the top-performing designs using additive manufacturing techniques to validate the model results.

“By leveraging the supercomputing resources available at Argonne, we ran very detailed simulations and also got the results much more quickly, reducing the simulation time from months to weeks,” said Chao Xu, an Argonne postdoctoral appointee leading the simulation efforts.

One particularly promising piston bowl design improved the mixing process between fuel and air. Researchers found that it could reduce fuel consumption by nearly 1 percent, a measurable improvement, while reducing soot by up to 20 percent.

“The workflow we developed will benefit everyone,” said Sibendu Som, manager of the Computational Multi-Physics Research Section in Argonne’s Energy Systems division, who supervises the team working on the project with Caterpillar. ​“We are publishing our methodology so companies can use it to design new piston bowls for themselves.”

In addition to the project’s simulation innovations, one of the team’s key contributions was its development of an industry-friendly approach, which allows companies to optimize their engine designs using their own in-house computer systems. This simplified model, based on the results of hundreds of the complex simulations, provides a similar level of accuracy while reducing the computational requirements by as much as 40 percent.

“It actually reduces the testing costs if we have a predictive model and optimize designs on a supercomputer. It also reduces the time industry needs to develop a product — a great benefit,” said Prithwish Kundu, a research scientist who is managing the project at Argonne.

“Our work with Argonne on this project enabled the exploration of a massive design space,” said Jon Anders, principal investigator and senior engineering specialist in Caterpillar’s Integrated Components and Solutions division. ​“By working together and leveraging simulation expertise and computing resources from Argonne with manufacturing and testing expertise at Caterpillar, we were able to optimize and test a piston on a timeline that was far shorter than would have otherwise been possible.”

This research was funded by DOE’s Advanced Manufacturing Office and Vehicle Technologies Office in the Office of Energy Efficiency and Renewable Energy, under the High Performance Computing for Manufacturing (HPC4Mfg) Program umbrella. The team used Argonne’s Laboratory Computing Resource Center, as well as the Mira supercomputer (now retired), operated by the Argonne Leadership Computing Facility, a DOE Office of Science User Facility.