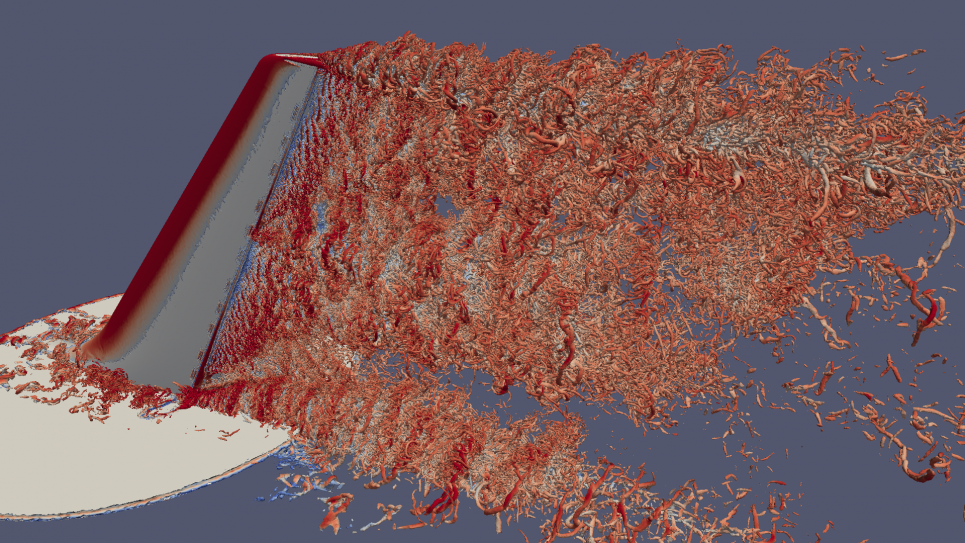 LEMONT, Ill., Jan. 30, 2017—The Argonne Leadership Computing Facility (ALCF), a Department of Energy Office of Science User Facility, has selected 10 computational science and engineering research projects for its Aurora Early Science Program starting this month. Aurora, a massively parallel, manycore Intel-Cray supercomputer, will be ALCF’s next leadership-class computing resource and is expected to arrive in 2018.

The 10 investigator-led projects originate from universities and national laboratories from across the country and span a wide range of disciplines. Collectively, these projects represent a typical system workload at the ALCF and cover key scientific areas and numerical methods. The teams will receive hands-on assistance to port and optimize their applications for the new architecture using systems available today.

The Early Science Program helps lay the path for hundreds of other users by doing actual science, using real scientific applications, to ready a future machine. “As with any bleeding edge resource, there’s testing and debugging that has to be done,” said ALCF Director of Science Katherine Riley. “And we are doing that with science.”

For the next couple of years, ALCF will host numerous training events to help the Aurora Early Science project teams and the computational community prepare their codes for the architecture and scale of the coming system, with assistance from Intel and Cray. Each Early Science team is also paired with a dedicated postdoctoral researcher from the ALCF.

The Early Science teams will use Theta, a 9.65 petaflops system based on Intel’s second-generation Xeon Phi processor and Cray’s Aries interconnect. “The Theta system is well suited for targeting KNH as well as non-hardware-specific development work, such as new algorithms or physics modules needed for the proposed early science runs,” said Tim Williams, an ALCF computational scientist who manages the Early Science Program.

In addition, the project teams will have access to training and hardware at the DOE’s Oak Ridge Leadership Computing Facility and DOE’s National Energy Research Supercomputing Center as alternative development platforms to encourage application code portability among heterogeneous architectures.

For decades, massively parallel supercomputers have reaped the benefits—predicted by Moore’s Law—of the relentless increase in density of components on chips that also rapidly improved performance of PCs and smartphones. This project aims to give something back, by attacking a fundamental materials problem impacting the latest and future chips: electrical current leakage through HfO2-silicon interface. HfO2 is used widely as a dielectric in Si-CMOS chips like the Aurora CPUs. Simulating this problem with the highly accurate quantum Monte Carlo (QMC) method is only now becoming computationally possible with supercomputers like Aurora.

The behavior of plasma at the outer edge of a tokamak fusion reactor is critically important to success of future fusion reactors such as ITER, now under construction in France. Misbehavior at the edge can lead to disruptions bombarding a small area of the divertor plates—metal structures at the bottom of the tokamak designed to absorb ejected heat—at levels beyond which the divertor material can withstand. This project will use particle simulations of the plasma, including impurities and the important magnetic field geometry at the edge, to predict behavior of ITER plasmas and to help guide future experimental parameters.

The NWChemEx code is providing the framework for next-generation molecular modeling in computational chemistry and for implementing critical computational chemistry methods. This project will apply it to two problems in development of advanced biofuels: design of feedstock for efficient production of biomass; and design of new catalysts for converting biomass-derived chemicals into fuels.

This project will simulate large fractions of the universe, including not only gravity acting on dark matter, but also baryons (which make up visible matter such as stars), and gas dynamics using a new, smoothed particle hydrodynamics method. These simulations are deeply coupled with guiding and interpreting observations from present and near-future cosmological surveys.

This project will use unprecedented high-resolution fluid dynamics simulations to model dynamic flow control over airfoil surfaces at realistic flight conditions and to model bubbly flow of coolant in nuclear reactors. Synthetic jet actuators, tiny cavities with speaker-like diaphragms that alternately expel and intake air, can alter and control airflow across surfaces such as plane tail rudders, allowing much stronger force (turning force, for a rudder). The reactor fluid flow problems will simulate realistic reactor geometries with far more accurate multiphase flow modeling than today’s state of the art, yielding valuable information on thermal management to improve safety of existing light-water reactors and inform the design of next-generation systems.

What do inertial confinement fusion (ICF) and supersonic aircraft have in common? Both involve the flow of gases in extreme conditions, including shock waves and turbulence. This project aims to advance scientific understanding of variable density turbulence and mixing, including shock interactions and near-wall effects. These apply to the mixing of the fuel capsule surface with the imploding plasma in ICF, and shock interaction with fuel streams in a supersonic jet engine as a way to improve combustion.

This project will deliver calculations urgently needed by experimental programs of high energy and nuclear physics, based on the computational methods of lattice quantum chromodynamics (lattice QCD). QCD embodies our most fundamental understanding of the strong nuclear force and associated particles, a key component of the more general Standard Model of particle physics. In high energy physics, lattice calculations are required to extract the fundamental parameters of the standard model (such as quark masses) from experiment. Evidence for physics beyond the Standard Model can be discovered if discrepancies are found between different methods for determining these parameters.

Functional materials, as the name implies, have behaviors useful in science and industry. There is great interest today in engineering materials to have desired behaviors. One approach involves stacking extremely thin layers of different materials to achieve a complex molecular interplay throughout the stack. The resulting behavior of the stack cannot be explained by traditional theories and can only be predicted by directly simulating the layers as collections of molecules interacting with each other. Massive quantum mechanical and reactive molecular dynamics simulations on Aurora will be validated by experiments on the same materials using a free-electron X-ray laser.

Membrane transport protein molecules play key roles in cellular biology functions. This includes natural processes as well as drug delivery and drug resistance. How these “molecular devices” perform their function is extremely complex. The proteins move into dramatically different conformations in the process. Modeling the myriad possibilities with atomistic molecular dynamics, even using the best statistical approaches, is at the forefront of what’s possible. These calculations on Aurora will advance that front.

DOE’s Office of Science is the single largest supporter of basic research in the physical sciences in the United States and is working to address some of the most pressing challenges of our time. For more information, please visit http://science.energy.gov.

The Early Science Program helps lay the path for hundreds of other users by doing actual science, using real scientific applications, to ready a future machine. “As with any bleeding edge resource, there’s testing and debugging that has to be done,” said ALCF Director of Science Katherine Riley. “And we are doing that with science.”