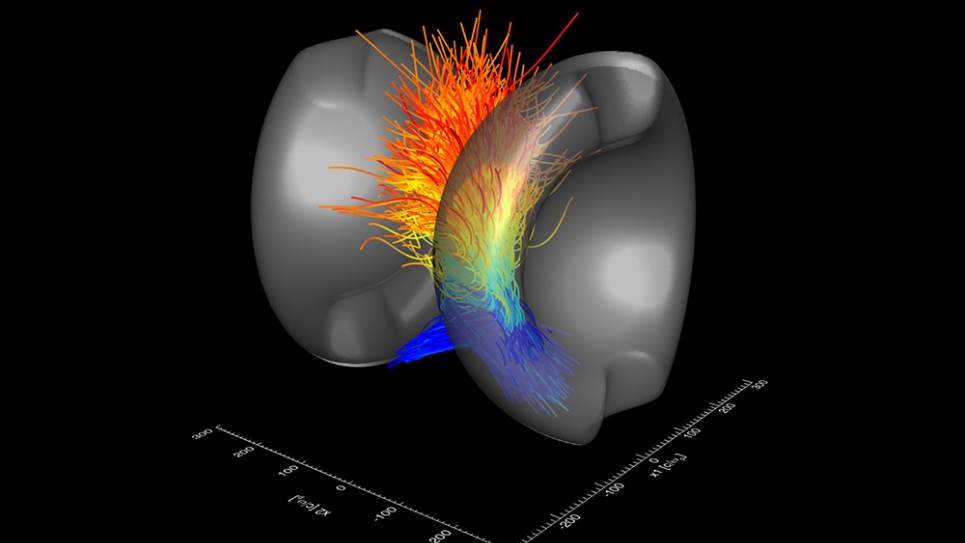 Every day, with little notice, the Earth is bombarded by energetic particles that shower its inhabitants in an invisible dusting of radiation, observed only by the random detector, or astronomer, or physicist duly noting their passing. These particles constitute, perhaps, the galactic residue of some far distant supernova, or the tangible echo of a pulsar. These are cosmic rays.

But how are these particles produced? And where do they find the energy to travel unchecked by immense distances and interstellar obstacles?

These are the questions Frederico Fiuza has pursued over the last three years, through ongoing projects at the Argonne Leadership Computing Facility (ALCF), a U.S. Department of Energy (DOE) Office of Science User Facility.

A physicist at the SLAC National Accelerator Laboratory in California, Fiuza and his team are conducting thorough investigations of plasma physics to discern the fundamental processes that accelerate particles. The answers could provide an understanding of how cosmic rays gain their energy and how similar acceleration mechanisms could be probed in the laboratory and used for practical applications.

While the “how” of particle acceleration remains a mystery, the “where” is slightly better understood. “The radiation emitted by electrons tells us that these particles are accelerated by plasma processes associated with energetic astrophysical objects,” says Fiuza.

The visible universe is filled with plasma, ionized matter formed when gas is super-heated, separating electrons from ions. More than 99 percent of the observable universe is made of plasmas, and the radiation emitted from them creates the beautiful, eerie colors that accentuate nebulae and other astronomical wonders.

The motivation for these projects came from asking whether it was possible to reproduce similar plasma conditions in the laboratory and study how particles are accelerated.

High-power lasers, such as those available at the University of Rochester’s Laboratory for Laser Energetics or at the National Ignition Facility in the Lawrence Livermore National Laboratory, can produce peak powers in excess of 1,000 trillion watts. At these high-powers, lasers can instantly ionize matter and create energetic plasma flows for the desired studies of particle acceleration.

To determine what processes can be probed and how to conduct experiments efficiently, Fiuza’s team recreates the conditions of these laser-driven plasmas using large-scale simulations. Computationally, he says, it becomes very challenging to simultaneously solve for the large scale of the experiment and the very small-scale physics at the level of individual particles, where these flows produce fields that in turn accelerate particles.

Because the range in scales is so dramatic, they turned to the petascale power of Mira, the ALCF’s Blue Gene/Q supercomputer, to run the first-ever 3D simulations of these laboratory scenarios. To drive the simulation, they used OSIRIS, a state-of-the-art, particle-in-cell code for modeling plasmas, developed by UCLA and the Instituto Superior Técnico, in Portugal, where Fiuza earned his PhD.

Part of the complexity involved in modeling plasmas is derived from the intimate coupling between particles and electromagnetic radiation — particles emit radiation and the radiation affects the motion of the particles.

In the first phase of this project, Fiuza’s team showed that a plasma instability, the Weibel instability, is able to convert a large fraction of the energy in plasma flows to magnetic fields. They have shown a strong agreement in a one-to-one comparison of the experimental data with the 3D simulation data, which was published in Nature Physics, in 2015. This helped them understand how the strong fields required for particle acceleration can be generated in astrophysical environments.

Fiuza uses tennis as an analogy to explain the role these magnetic fields play in accelerating particles within shock waves. The net represents the shockwave and the racquets of the two players are akin to magnetic fields. If the players move towards the net as they bounce the ball between each other, the ball, or particles, rapidly accelerate.

“The bottom line is, we now understand how magnetic fields are formed that are strong enough to bounce these particles back and forth to be energized. It’s a multi-step process: you need to start by generating strong fields — and we found an instability that can generate strong fields from nothing or from very small fluctuations — and then these fields need to efficiently scatter the particles,” says Fiuza.

But particles can be energized in another way if the system provides the strong magnetic fields from the start.

“In some scenarios, like pulsars, you have extraordinary magnetic field amplitudes,” notes Fiuza. “There, you want to understand how the enormous amount of energy stored in these fields can be directly transferred to particles. In this case, we don’t tend to think of flows or shocks as the dominant process, but rather magnetic reconnection.”

Magnetic reconnection, a fundamental process in astrophysical and fusion plasmas, is believed to be the cause of solar flares, coronal mass ejections, and other volatile cosmic events. When magnetic fields of opposite polarity are brought together, their topologies are changed. The magnetic field lines rearrange in such a way as to convert magnetic energy into heat and kinetic energy, causing an explosive reaction that drives the acceleration of particles. This was the focus of Fiuza’s most recent project at the ALCF.

Again, Fiuza’s team modeled the possibility of studying this process in the laboratory with laser-driven plasmas. To conduct 3D, first-principles simulations (simulations derived from fundamental theoretical assumptions/predictions), Fiuza needed to model tens of billions of particles to represent the laser-driven magnetized plasma system. They modeled the motion of every particle and then selected the thousand most energetic ones. The motion of those particles was individually tracked to determine how they were accelerated by the magnetic reconnection process.

“What is quite amazing about these cosmic accelerators is that a very, very small number of particles carry a large fraction of the energy in the system, let’s say 20 percent. So you have this enormous energy in this astrophysical system, and from some miraculous process, it all goes to a few lucky particles,” he says. “That means that the individual motion of particles and the trajectory of particles are very important.”

The team’s results, which were published in Physical Review Letters, in 2016, show that laser-driven reconnection leads to strong particle acceleration. As two expanding plasma plumes interact with each other, they form a thin current sheet, or reconnection layer, which becomes unstable, breaking into smaller sheets. During this process, the magnetic field is annihilated and a strong electric field is excited in the reconnection region, efficiently accelerating electrons as they enter the region.

Fiuza expects that, like his previous project, these simulation results can be confirmed experimentally and open a window into these mysterious cosmic accelerators.

This research is supported by the DOE Office of Science. Computing time at the ALCF was allocated through the Innovative and Novel Computational Impact on Theory and Experiment (INCITE) program.