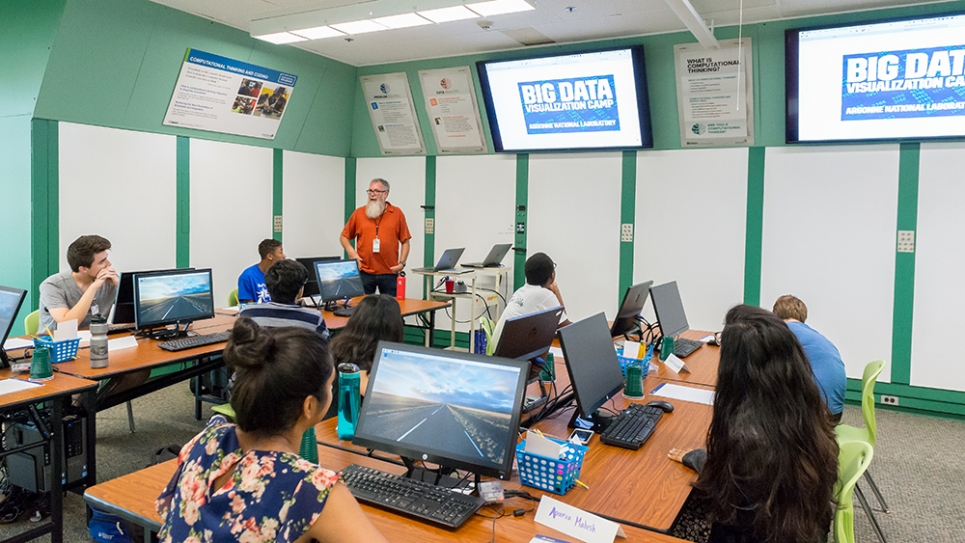 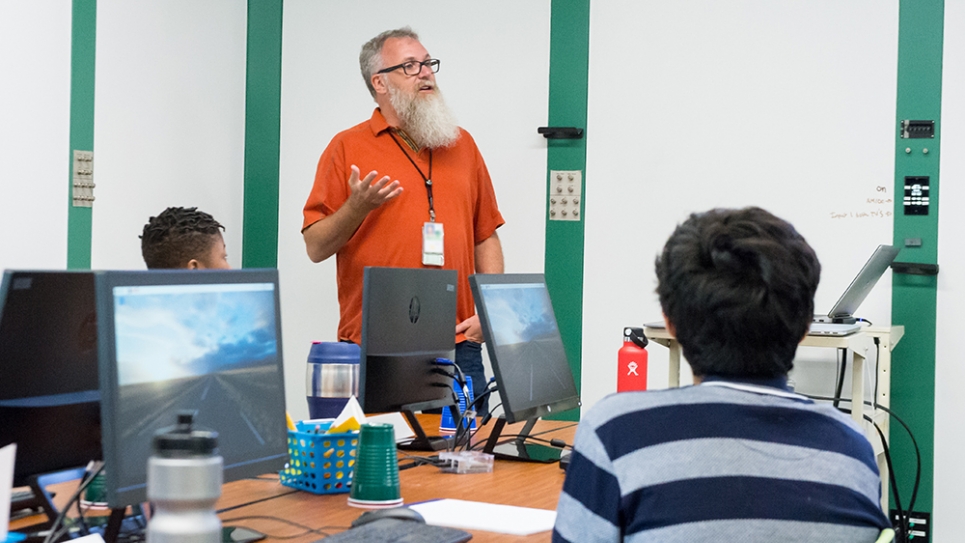 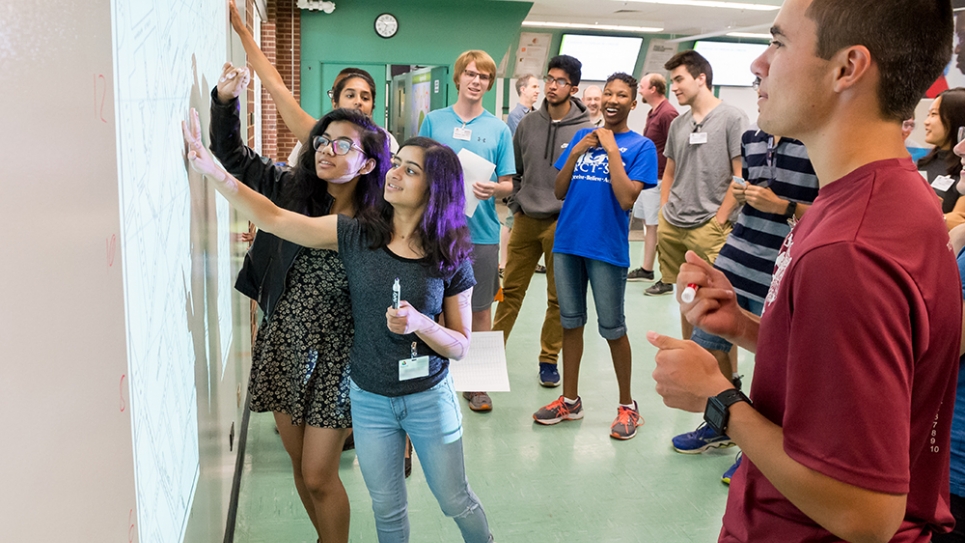 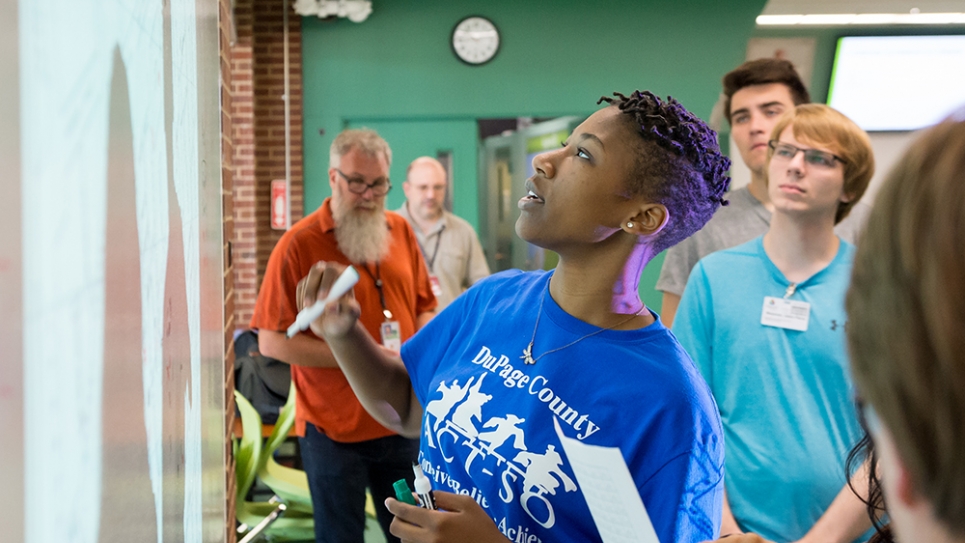 In a room that resembles the bridge of the original starship Enterprise, 14 high schoolers are immersed in graphs and numbers on their computer screens. The students are participating in the first Big Data and Visualization Camp at the U.S. Department of Energy’s (DOE) Argonne National Laboratory. It is an opportunity for them to get a head start on what promises to be one of the most important skills for the coming era: extracting meaningful, useful information from an increasingly vast sea of numerical data.

“Data is the primary output of computing, and computing is a primary driver of our nation’s ability to compete, technologically and scientifically,” said Meridith Bruozas, manager of Education Programs and Outreach at Argonne. ​“There are few opportunities for students to get exposure to data science early in their education. We see Argonne as filling that void by being the bridge between what happens in schools and the needs of our scientific workforce.”

By some estimates, more than 90 percent of the data produced in the history of the world has been generated in the past decade. And the flow is only intensifying as scientists collect information from telescopes, microscopes and everything in between.

Add to that the endless stream of output from social media and personal devices and the amount of raw data accessible to us is truly remarkable. But interpreting it all in numerical form is practically impossible for human beings.

“Visualization is a tool that helps researchers see patterns and relationships in big data that would be hard to see otherwise,” said Michael Papka, one of the camp’s creators and the director of the Argonne Leadership Computing Facility (ALCF), a DOE Office of Science User Facility. ​“The idea behind this camp is to teach students how to gain insights from vast amounts of data.”

It’s a skill Argonne is well-suited to teach.

”We have a lot of expertise in this field,” said John Domyancich, the learning center lead in Educational Programs. ​“The instructors at the camp are the Argonne scientists who work with supercomputers and their huge data sets. We have these incredible resources that we want to share with the community. The skills these kids are going to need in the future are different from what is traditionally taught in school.”

The campers are working with data from the Array of Things, an Argonne-University of Chicago project that is collecting real-time data on Chicago’s environment, infrastructure and activity using a network of 100 environmental and air quality sensors located around the city.

The Array of Things has only just started to publish its data, ​“so we are some of the first people to look at it,” said Grace Arnold, a camper and recent graduate of Lincolnwood East High School who will be attending the Illinois Institute of Technology in the fall. ​“That’s pretty cool.”

All of the students had some coding experience before entering the program. Even so, they spent part of the first day of the three-day camp learning the Python language they’d need to build the visualization tools.

In one session, Silvio Rizzi, a visualization scientist at the ALCF, showed the young coders some techniques for graphing temperature and humidity data to try to discover if the two were correlated in some way. First, the students wrote a program. Then they figured out how to represent the answer visually.

“When I thought about coding, I never thought about pictures, graphs and things like that,” said Azamuddun Ahmed, who will be a senior at Niles West High School in the fall. ​“I just thought about commands. The first day they showed us the difference between looking at numbers and looking at a graph. When you have a graph you can visualize it better. Different data sets that look the same can actually be different on the graph.”

Working with data also means learning how to manipulate it ethically. Using only small chunks of data without looking at the larger picture, for example, can lead to erroneous conclusions.

“So there’s a certain sense of responsibility when you’re using data,” said Domyancich. ​“We’ll probably give the students some red herrings — let them draw some conclusions and show them that they’re not true.”

Many, but not all, of the campers are already aiming toward careers in computing or in the sciences. Grace Arnold and Azamuddun Ahmed are both interested in computer science. Jenna Ocheltree, who just graduated from Libertyville High School, is going to Wellesley College to study physics. But Vikram Sunderrajan, who is going into his senior year at Neuqua Valley High School, plans to become an actuary.

The idea, said Papka, is to give students a set of techniques that they can apply to any kind of data.

“First and foremost, we want the students to understand that data is fundamentally neutral,” he said. ​“Understanding how data is responsibly analyzed, understood and reported is a critical part of succeeding in any STEM career, but that’s not the only thing we want them to walk away with. The analytical skills we’re teaching will potentially serve a student in any career.”

For Fantah Kabba, who is going into her senior year at Plainfield East High School, the camp is a clarifying experience as she tries to figure out her future direction.