Fractured surface of the exploding core of a 16 solar-mass star computed on Theta. Bluish outer veil is the shock wave traveling ~ 10,000 kilometers per second. The surface is colored by electron fraction: Purple is proton rich matter; blue is neutron rich. Left behind is a newly-born neutron star. (Image: Joseph A. Insley and Silvio Rizzi, Argonne National Laboratory)

“Trying to simulate the last seconds in the life of a massive star is a great drama at the confluence of nuclear and particle physics, statistical physics, and the computational arts,” explained astrophysicist Adam Burrows of Princeton University.

Those last seconds end in a series of abrupt dynamic events that power a cataclysmic explosion known as a supernova, a collapsed star peppering its cosmic neighborhood with the fundamental elements that help form the massive structures of the universe and, eventually, the life-forms that inhabit it.

To simulate and understand these violent cosmic events, a collaborative effort led by Burrows is engaging decades of supernovae physics findings and a state-of-the-art multiphysics code with the computational assets at the U.S. Department of Energy’s (DOE) Argonne National Laboratory.

An article on the team’s recent work, published in the November issue of Monthly Notices of the Royal Astronomical Society (MNRAS), details the results of ​“the largest collection of sophisticated 3D supernova simulations ever performed … ” to consider “(w)hich massive stars end their lives in supernovae, with what properties, and why?”

The 19 simulations described in the paper focus on a range of massive stars — those with a mass greater than eight times that of our own sun — from 9 to 60 solar masses. Evolving over tens of millions of years, the stars will produce onion-skin-like layers of elements, the heaviest settling around a super-dense core that eventually becomes unstable. Within seconds, the core collapses to nuclear densities, producing a shockwave that is an explosion in its infancy, noted Burrows.

“What we’ve been trying to do over the last 30 years is to ensure in detail that we understand how that shockwave propagates outward to eject most of the star, leaving behind a corpse which could be a neutron star or a black hole,” he said. 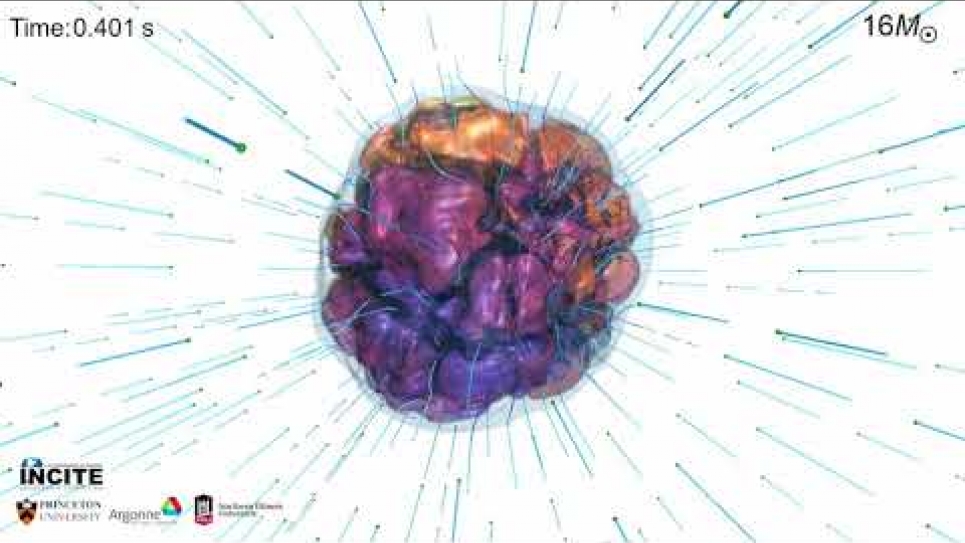 Trying to develop a fully rounded theory on why a massive star goes supernova and how the shockwave propagates through space is something of a challenge if you’re conducting your simulations in only one dimension — radially, or outwardly from the core — plus time.

The shocks frequently stalled, moving out in mass but not in radius, and so too did hopes for validating certain theories.

While there were advancements along the way, such was the state of affairs until the introduction of ​“big iron,” a reference to the current batch of world-class supercomputers, like those Burrows has been using at the Argonne Leadership Computing Facility (ALCF), a DOE Office of Science User Facility.

Machines like the ALCF’s Theta provide the power researchers require to effectively compute the exponential complexity of simulations when accounting for highly complicated dynamics like neutrino-matter interactions and turbulence, among others.

“It turns out to be a really complicated problem if you do it right.”

It also turns out that some things explode more easily in 3D and 3D simulations offer a clearer window on how that occurs. The picture that’s emerging suggests that the turbulent pressure of the exploding star matter is the central factor in the explosion.

The key players in this reaction, it appears, are neutrinos, which are created prodigiously in environments of super-high energies and densities, like that of a collapsing star. As they are driven outward, the neutrinos separate from matter and deposit some of their energy behind the shockwave.

This energy deposition, according to Burrows, is like setting off TNT to reenergize the shock and keep it from stalling, a consequence that would, in most cases, lead to the formation of a black hole.

“So, what we see more accurately in three dimensions is that most of our calculations actually explode. And this is a new state of affairs.”

The improvement in these calculations is driven in part by a state-of-the-art radiation/hydrodynamic code called Fornax, developed at Princeton, combined with ​“big iron” like Theta to capture the complexity and detail of this multiphysics problem.

Recent practice asserted that the radiative transfer should be solved using an implicit method, which required that every single grid point of the simulation reached a solution that made sense at every time step before any solution at any grid point was found.

“There weren’t codes that could do that fully implicit solve over the whole grid and still scale well,” said Burrows. ​“So, you ended up with a big scaling hit when you reached the number of computer cores that were necessary to do a reasonable calculation.”

The team realized it could solve for the radiative transport using the more localized solving method they used for the hydrodynamics. While the speeds of light and sound are typically limiting factors within the domains of transport and hydrodynamics, respectively, the high densities in the centers of neutron stars make them similar enough to circumvent the need for the implicit approach.

“That all the solves were now local gave us about a factor of five speed-up, and the model was still stable. That was a breakthrough,” exclaimed Burrows.

The MNRAS paper also casts doubt on a long-held view that the compactness of the stellar core — a quantity proportional to the radius over mass at a specified interior mass — determined explosiveness, the authors noting that ​“we have found in recent studies in 2D and 3D that this naïve picture is not complete and that explodability is not correlated with compactness in a simple way.”

Early proponents suggested that only low-compactness would cause an explosion, but Burrows’ team found that both low- and high-compactness can trigger an explosion and those models in the middle ranges might not explode at all.

“It turns out that when you do these simulations in multiD, even in 2D, you get low-energy explosions,” said Burrows. ​“As you go up in compactness, it’s possible that you might not get supernovae at all. And when you go up to high-compactness, you get a nice vigorous explosion, but it might start a little bit later.”

While the team’s 3D simulations have invigorated several theories, Burrows admitted that there is still much left unanswered. It will require further simulation exploration, perhaps using the ​“big iron” that will be the ALCF’s Aurora, among the nation’s first exascale computers. It might hinge on neutrino interactions that we can observe in detail using current and future Earth-bound detectors.

And, there is always the further refinement of codes to get the right physics.

This work was supported by the DOE Office of Science and the National Science Foundation. ALCF computing time was awarded through DOE's INCITE program.