Leaning into the supercomputing learning curve 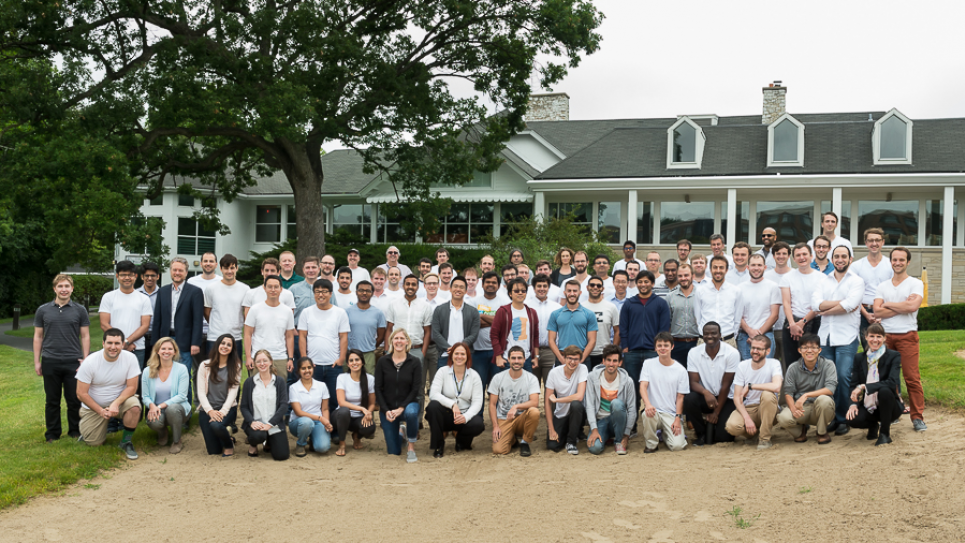 What would you do with a supercomputer that is at least 50 times faster than today’s fastest machines? For scientists and engineers, the emerging age of exascale computing opens a universe of possibilities to simulate experiments and analyze reams of data — potentially enabling, for example, models of atomic structures that lead to cures for disease.

But first, scientists need to learn how to seize this opportunity, which is the mission of the Argonne Training Program on Extreme-Scale Computing (ATPESC). The training is part of the Exascale Computing Project, a collaborative effort of the U.S. Department of Energy’s (DOE) Office of Science and its National Nuclear Security Administration.

Starting in late July, 70 participants — graduate students, computational scientists, and postdoctoral and early-career researchers — gathered at the Q Center in St. Charles, Illinois, for the program’s fifth annual training session. This two-week course is designed to teach scientists key skills and tools and the most effective ways to use leading-edge supercomputers to further their research aims.

This year’s ATPESC agenda once again was packed with technical lectures, hands-on exercises and dinner talks.

“But using them efficiently requires a unique skill set. With ATPESC, we aim to touch on all of the key skills and approaches a researcher needs to take advantage of the world’s most powerful computing systems.”

To address all angles of high-performance computing, the training focuses on programming methodologies that are effective across a variety of supercomputers — and that are expected to apply to exascale systems. Renowned scientists, high-performance computing experts and other leaders in the field served as lecturers and guided the hands-on sessions.

“I was looking at how best to optimize what I’m currently using on these new architectures and also figure out where things are going,” said Justin Walker, a Ph.D. student in the University of Wisconsin-Madison’s Physics Department. “ATPESC delivers on instructing us on a lot of things.”

Shikhar Kumar, Ph.D. candidate in nuclear science and engineering at the Massachusetts Institute of Technology, elaborates: “On the issue of I/O, data processing, data visualization and performance tools, there isn’t a single option that is regarded as the ‘industry standard.’ Instead, we learned about many of the alternatives, which encourages learning high-performance computing from the ground up.”

“You can’t get this material out of a textbook,” said Eric Nielsen, a research scientist at NASA’s Langley Research Center. Added Johann Dahm of IBM Research, “I haven’t had this material presented to me in this sort of way ever.”

Jonathan Hoy, a Ph.D. student at the University of Southern California, pointed to the larger, “ripple effect” role of this type of gathering: “It is good to have all these people sit down together. In a way, we’re setting standards here.”

Lisa Goodenough, a postdoctoral researcher in high energy physics at Argonne, said: “The theme has been about barriers coming down.” Goodenough referred to both barriers to entry and training barriers hindering scientists from realizing scientific objectives.

“The program was of huge benefit for my postdoctoral researcher,” said Roseanna Zia, assistant professor of chemical engineering at Stanford University. “Without the financial assistance, it would have been out of my reach,” she said, highlighting the covered tuition fees, domestic airfare, meals and lodging.

Now, anyone can learn from the program’s broad curriculum, including the slides and videos of the lectures from some of the world’s foremost experts in extreme-scale computing, online — underscoring program organizers’ efforts to extend its reach beyond the classroom. The slides and the videos of the lectures captured at ATPESC 2017 are now available online at: http://extremecomputingtraining.anl.gov/2017-slides and http://extremecomputingtraining.anl.gov/2017-videos, respectively.

For more information on ATPESC, including on applying for selection to attend next year’s program, visit http://extremecomputingtraining.anl.gov.

This research was supported by the Exascale Computing Project (17-SC-20-SC), a joint project of the U.S. Department of Energy’s Office of Science and National Nuclear Security Administration, responsible for delivering a capable exascale ecosystem, including software, applications and hardware technology, to support the nation’s exascale computing imperative. ECP was established to develop a capable exascale ecosystem, encompassing applications, system software, hardware technologies and architectures and workforce development to meet the scientific and national security mission needs of DOE in the mid-2020s timeframe.

Established by Congress in 2000, the National Nuclear Security Administration (NNSA) is a semi-autonomous agency within the U.S. Department of Energy responsible for enhancing national security through the military application of nuclear science. NNSA maintains and enhances the safety, security, and effectiveness of the U.S. nuclear weapons stockpile without nuclear explosive testing; works to reduce the global danger from weapons of mass destruction; provides the U.S. Navy with safe and effective nuclear propulsion; and responds to nuclear and radiological emergencies in the U.S. and abroad. Visit nnsa.energy.gov for more information.