Mira supercomputer simulations give a new “edge” to fusion research 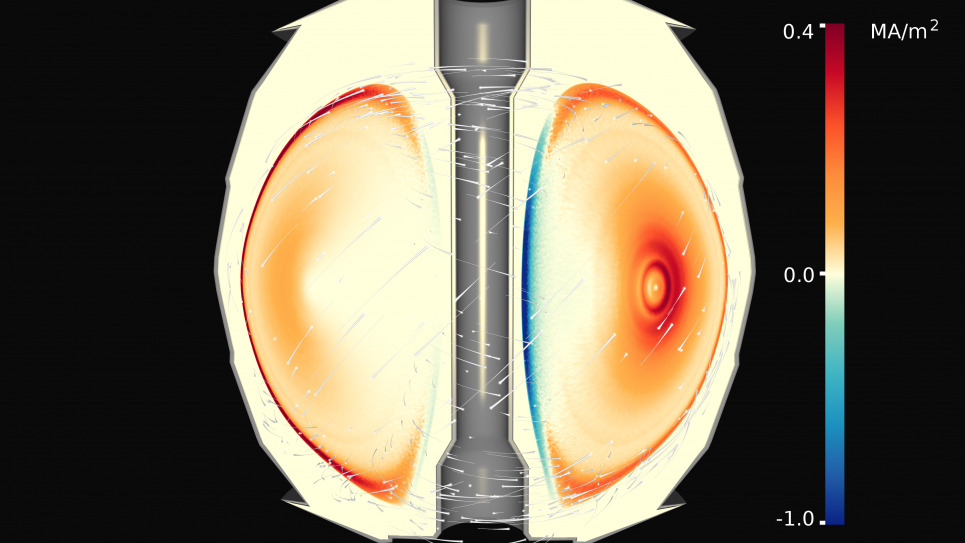 Using Mira, physicists from Princeton Plasma Physics Laboratory uncovered a new understanding about electron behavior in edge plasma. Based on this discovery, improvements were made to a well-known analytical formula that could enhance predictions of and, ultimately, increase fusion power efficiency.

Today’s nuclear power plants run on nuclear fission reactions—or the breaking down of heavy radioactive elements like uranium, which are strictly regulated for safety and ultra-long-term waste storage. But there may be a safer, greener, and virtually inexhaustible nuclear power on the horizon. Fueled by isotopes of hydrogen collected from sea water, fusion power could be a global solution to future energy demand.

Progress in fusion research over the last few decades has led to the design of the first plant-scale, prototype fusion research reactor, ITER, currently under construction in France. With ITER slated to begin experimental tests around 2025, it is a critical time for the international teams of scientists and engineers who are planning how the reactor will perform at maximum efficiency.

To develop the best predictive tools for ITER (and, by extension, other experimental fusion reactors), research teams are using high-performance computing (HPC) to resolve the behaviors of fusion plasma across the many spatial scales that impact reactor efficiency and plasma stability.

“Right now, it is only through HPC that researchers can simulate plasma kinetics for large experiments like ITER with enough simulated electrons to resolve important physics,” said Tim Williams, Argonne Leadership Computing Facility (ALCF) computational scientist. The ALCF is a U.S. Department of Energy (DOE) Office of Science User Facility.

Their research at the ALCF led to a new understanding and a more accurate formula for the self-generating electrical current.

Most magnetic fusion reactors are donut-shaped vessels, known as tokamaks, which are capable of confining plasma that reaches tens of millions of degrees. In ITER’s case, the plasma will heat up to 150 million degrees Celsius (hotter than the Sun’s core) under the force of an extremely strong magnetic field produced by powerful superconducting magnets coiled around the tokamak.

The magnetic field works together with a strong electrical current that runs through the plasma to boost power. Some of this current, called “bootstrap current,” is self-generated by the plasma.

“We would like to rely on this self-generating current as much as possible because it doesn’t cost us anything,” Chang said.

The bootstrap current enables a more efficient reactor because it helps create a barrier known as the “steep edge plasma pedestal” between the highly energized core plasma and the cold edge plasma. Maintaining a stable barrier at the edge pedestal is a critical challenge in experimental fusion.

But despite the importance of the edge plasma to efficiency and stability, many previous studies of bootstrap current in tokamak reactors have focused on the core plasma, and the analytical formulas for making predictions of reactor efficiency have largely been derived from these core plasma studies.

Specifically, more accurate predictions of bootstrap current density in the steep edge plasma can reduce potential instabilities. A poorly-controlled edge bootstrap current can generate too much power and lead to damaging collapse, lashing powerful plasma energy at the interior walls of the tokamak.

“The pedestal cannot be too steep,” Chang said. “If, for instance, you try to make a sand pile at the beach but you make it too steep, it will easily collapse. That is what happens with plasma also.”

The team used the latest iteration, XGCa, of the XGC gyrokinetic code, which has been a leadership-class computing code for the past decade and was lately made more portable to adapt to the future of HPCs. XGC is the only code capable of simulating electron particle behavior from first-principles in realistic tokamak edge geometry, making it a computationally demanding code that requires petaflop systems like Mira.

When researchers initially ran into problems running their large-scale simulations, Williams and ALCF systems specialist Adam Scovel identified where the code was hanging in a BlueGene-specific library function.

“They found a way to work around the problem that allowed us to perform the simulation. Otherwise, it would have been difficult,” Chang said. “We could not have done this study without a system of Mira’s size.”

Running on more than 260,000 Mira processing cores with excellent scalability, the latest XGCa plasma edge simulations revealed electron behaviors related to edge bootstrap current that are not accurately predicted for present-day tokamak geometry by the well-known Sauter formula, which is used to calculate values for the bootstrap current.

Two types of electrons characterize bootstrap current: passing and trapped. Based on tokamak geometries with large aspect ratios, in which the tokamak torus (the donut-shaped vessel) is skinny with a wide center hole, physicists have understood for decades that passing electrons are primarily responsible for carrying the bootstrap current while the trapped particles generate it.

However, with more detailed simulations of trapped and passing electrons of the edge plasma, Chang and Hager observed that trapped electrons can take on the responsibility of carrying bootstrap current at the edge where there are fewer passing electrons.

“We found that at the steep pedestal edge where there aren’t too many passing electrons, the trapped electrons carry most of the current,” Chang said.

The ratio of passing-to-trapped electrons inverted from 80 percent passing to 20 percent trapped electrons in the torus core to 20 percent passing and 80 percent trapped at the edge. Simulations showed that this property of bootstrap current applies to both conventional and low (or tight) aspect ratios that make up most of today’s tokamak geometries, including ITER, which has a conventional aspect ratio with a fatter torus and smaller center hole than the large-aspect-ratio limit.

With a more precise formula like this, fusion researchers can better project the fusion power efficiency of ITER and, in turn, help refine parameters for the magnetic field, temperature, and other controls during experimental operations.

“ITER’s goal is to see 10 times energy output versus energy input or more, and the faster we can get there, the sooner we will see commercial fusion power,” Chang said.

This research is supported by DOE’s Office of Science. Computing time at the ALCF was allocated through DOE’s Innovative and Novel Computational Impact on Theory and Experiment (INCITE) program.