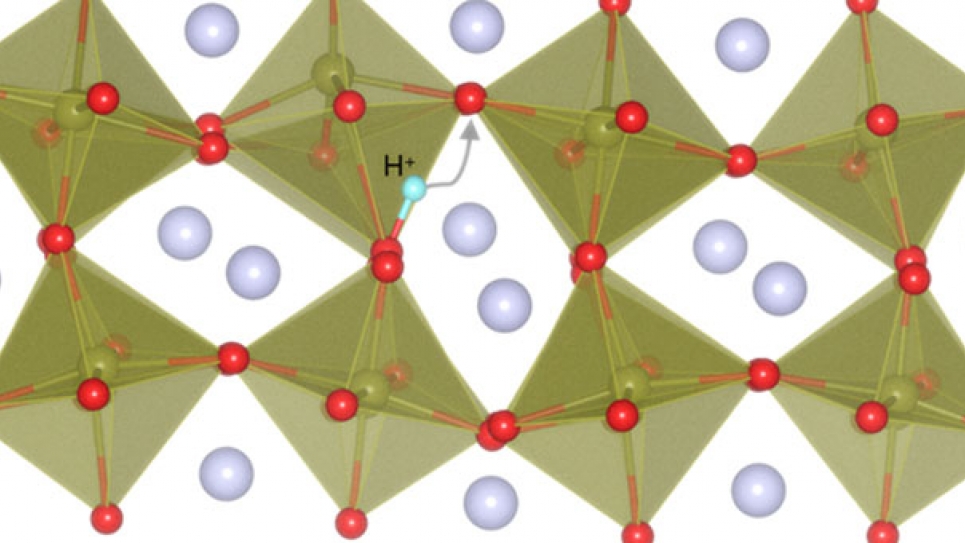 Even as the power of our modern computers grows exponentially, biological systems – like our brains – remain the ultimate learning machines. By finding materials that act in ways similar to the mechanisms that biology uses to retain and process information, scientists hope to find clues to help us build smarter computers.

Inspired by human forgetfulness – how our brains discard unnecessary data to make room for new information – scientists at the U.S. Department of Energy’s (DOE) Argonne National Laboratory, in collaboration with Brookhaven National Laboratory and three universities, conducted a recent study that combined supercomputer simulation and X-ray characterization of a material that gradually “forgets.” This could one day be used for advanced bio-inspired computing.

“The brain has limited capacity, and it can only function efficiently because it is able to forget,” said Subramanian Sankaranarayanan, an Argonne nanoscientist and study author. “It’s hard to create a non-living material that shows a pattern resembling a kind of forgetfulness, but the specific material we were working with can actually mimic that kind of behavior.”

The material, called a quantum perovskite, offers researchers a simpler non-biological model of what “forgetfulness” might look like on an electronic level. The perovskite shows an adaptive response when protons are repeatedly inserted and removed that resembles the brain’s desensitization to a recurring stimulus.

When scientists initially add or remove a proton (H+) from the perovskite (SmNiO3 (SNO)) lattice, the material’s atomic structure expands or contracts dramatically to accommodate it in a process called “lattice breathing.” But when this happens over and over again, the material’s behavior evolves such that the lattice breathing is reduced – the proton “threat” no longer causes the material to hyperventilate.

“Eventually, it becomes harder to make the perovskite ‘care’ if we are adding or removing a proton,” said Hua Zhou, a physicist involved in characterizing the behavior of the material using X-rays provided by Argonne’s Advanced Photon Source (APS), a DOE Office of Science User Facility. “It’s like when you get very scared on a water slide the first time you go down, but each time after that you have less and less of a reaction.”

As the material responds to protons that scientists add and subtract, its ability to resist an electrical current can be severely affected. This behavior allows the material to be effectively programmed, like a computer, by the proton doping. Essentially, a scientist could insert or remove protons to control whether or not the perovskite would allow a current.

Researchers have recently pushed to develop non-silicon-based materials, like perovskites, for computing because silicon struggles to use energy as efficiently. Scientists may use perovskites in learning machines down the line. But scientists can also take advantage of perovskite properties by using them as the basis for computational models of more complex biological learning systems.

“These simulations, which quite closely match the experimental results, are inspiring whole new algorithms to train neural networks to learn,” Zhou said.

The perovskite material and the resulting neural network algorithms could help develop more efficient artificial intelligence capable of facial recognition, reasoning and human-like decision-making. Scientists are continuing the research to discover other materials with these brain-like properties and new ways to program these materials.

Finally, unlike in silicon, whose electronic structure can be easily described using simple computer models, understanding the perovskite material requires computationally intensive simulations to capture how its structure reacts to proton doping.

“A classical framework doesn’t apply to this complex system,” said Sankaranarayanan, who helped to create complex models of the perovskite’s behavior at Argonne’s Center for Nanoscale Materials and Argonne Leadership Computing Facility, both DOE Office of Science User Facilities. “Quantum effects dominate, so it takes very computationally demanding simulations to show how the proton moves inside the structure.”

This type of comprehensive research is a unique capability of Argonne’s interdisciplinary campus, where scientists at can easily share ideas and resources.

A study based on the research, “Habituation based synaptic plasticity and organismic learning in a quantum perovskite,” appeared in the August 14 online issue of Nature Communications.

The research is affiliated with the Center for Spintronic Materials, Interfaces and Novel Architecture (C-SPIN), one of six centers funded by the Semiconductor Research Corporation and the Defense Advanced Research Projects Agency.

Funding for the research was provided by the U.S. Army Research Office, U.S. Air Force Office of Scientific Research, C-SPIN, Intel Corporation, and by the Vannevar Bush Faculty Fellowship.