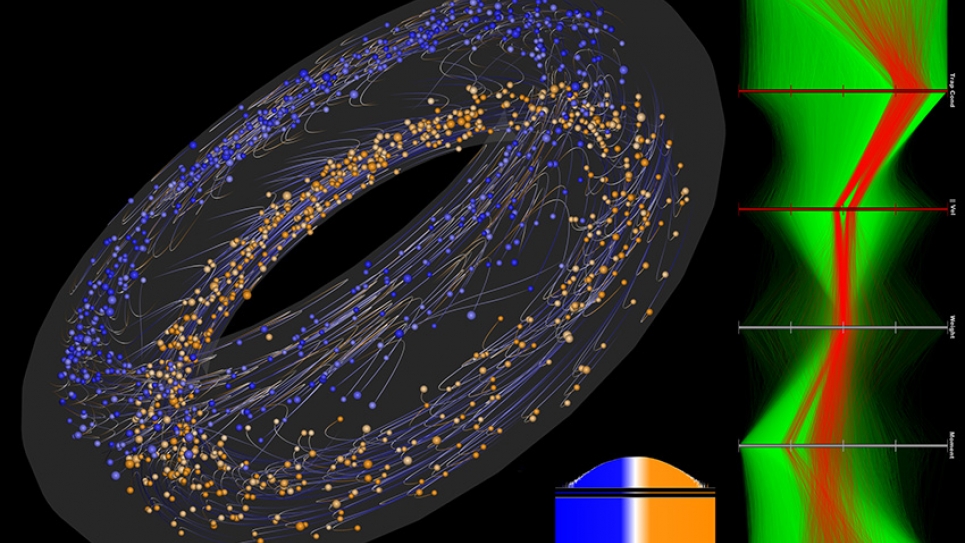 With the potential to provide clean, safe, and abundant energy, nuclear fusion has been called the “holy grail” of energy production. But harnessing energy from fusion, the process that powers the sun, has proven to be an extremely difficult challenge.

Scientists have been working to accomplish efficient, self-sustaining fusion reactions for decades, and significant research and development efforts continue in several countries today.

For one such effort, researchers from the Princeton Plasma Physics Laboratory (PPPL), a DOE collaborative national center for fusion and plasma research in New Jersey, are running large-scale simulations at the Argonne Leadership Computing Facility (ALCF) to shed light on the complex physics of fusion energy. Their most recent simulations on Mira, the ALCF’s 10-petaflops Blue Gene/Q supercomputer, revealed that turbulent losses in the plasma are not as large as previously estimated.

This is good news for the fusion research community as plasma turbulence presents a major obstacle to attaining an efficient fusion reactor in which light atomic nuclei fuse together and produce energy. The balance between fusion energy production and the heat losses associated with plasma turbulence can ultimately determine the size and cost of an actual reactor.

Currently under construction in France, ITER will be the world’s largest tokamak system, a device that uses strong magnetic fields to contain the burning plasma in a doughnut-shaped vacuum vessel. In tokamaks, unavoidable variations in the plasma’s ion temperature drive microturbulence, which can significantly increase the transport rate of heat, particles, and momentum across the confining magnetic field.

“Simulating tokamaks of ITER's physical size could not be done with sufficient accuracy until supercomputers as powerful as Mira became available,” said Tang.

To prepare for the architecture and scale of Mira, Tim Williams of the ALCF worked with Tang and colleagues to benchmark and optimize their Gyrokinetic Toroidal Code – Princeton (GTC-P) on the ALCF’s new supercomputer. This allowed the research team to perform the first simulations of multiscale tokamak plasmas with very high phase-space resolution and long temporal duration. They are simulating a sequence of tokamak sizes up to and beyond the scale of ITER to validate the turbulent losses for large-scale fusion energy systems.

Decades of experimental measurements and theoretical estimates have shown turbulent losses to increase as the size of the experiment increases; this phenomenon occurs in the so-called Bohm regime. However, when tokamaks reach a certain size, it has been predicted that there will be a turnover point into a Gyro-Bohm regime, where the losses level off and become independent of size. For ITER and other future burning plasma experiments, it is important that the systems operate in this Gyro-Bohm regime.

The recent simulations on Mira led the PPPL researchers to discover that the magnitude of turbulent losses in the Gyro-Bohm regime is up to 50% lower than indicated by earlier simulations carried out at much lower resolution and significantly shorter duration. The team also found that transition from the Bohm regime to the Gyro-Bohm regime is much more gradual as the plasma size increases.  With a clearer picture of the shape of the transition curve, scientists can better understand the basic plasma physics involved in this phenomenon.

“Determining how turbulent transport and associated confinement characteristics will scale to the much larger ITER-scale plasmas is of great interest to the fusion research community,” said Tang. “The results will help accelerate progress in worldwide efforts to harness the power of nuclear fusion as an alternative to fossil fuels.”

This project has received computing time at the ALCF through DOE’s Innovative and Novel Computational Impact on Theory and Experiment (INCITE) program. The effort was also awarded pre-production time on Mira through the ALCF’s Early Science Program, which allowed researchers to pursue science goals while preparing their GTC-P code for Mira.