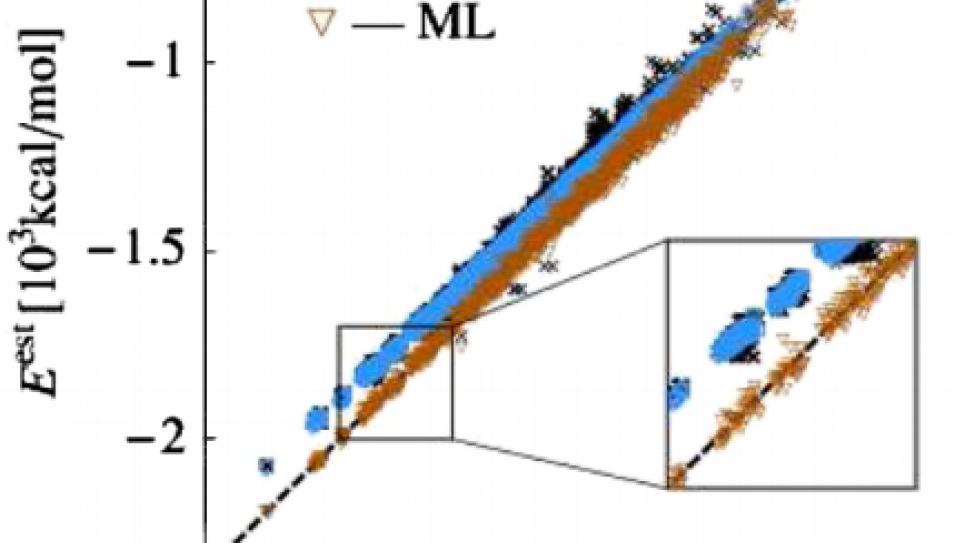 By combining quantum chemistry with artificial intelligence (machine learning), researchers at the Institute for Pure and Applied Mathematics at the University of California—Los Angeles achieved a scientific breakthrough expected to aid in exploring chemical compounds. Led by Anatole von Lilienfeld, a catalyst from the Argonne Leadership Computing Facility, the interdisciplinary team from the Technical University Berlin (Germany), the Fritz-Haber Institute of the Max-Planck Society (Germany), and the Argonne Leadership Computing Facility (United States) dramatically increased the speed of calculating energies of small molecules with quantum chemical accuracy.

Quantum chemical methods permit scientists to calculate molecular properties on a computer from first principles (i.e., without having to conduct any experiments). They are necessary for many chemical applications such as catalysis, or the discovery of novel materials. Previously, such calculations demanded intensive computational resources. Machine learning, on the other hand, generates predictive models based on examples. An algorithm is fed examples, and the computer uses them to predict an outcome. When applied to quantum chemistry, thousands of quantum chemical reference energies have been calculated in order to “learn'' a molecular model. The resulting machine permits the prediction of molecular properties with comparable accuracy within milliseconds, instead of hours. Such speed-up paves the way for highly accurate calculations of an unprecedented number of molecules.

The team focused on a basic quantum chemical property: the energy tied up in all the bonds holding a molecule together—the atomisation energy. The researchers calculated atomisation energies for a database of 7,165 molecules, and used it to design a machine learning model capable of predicting atomisation energies for new molecules out of sample. The Blue Gene/P supercomputer at the ALCF will be used to extend this approach to millions of other compounds or materials. This will permit researchers to tackle more complex problems such as finding novel catalysts for chemical reactions, designing bio-mimetic materials, or other purpose-built materials.