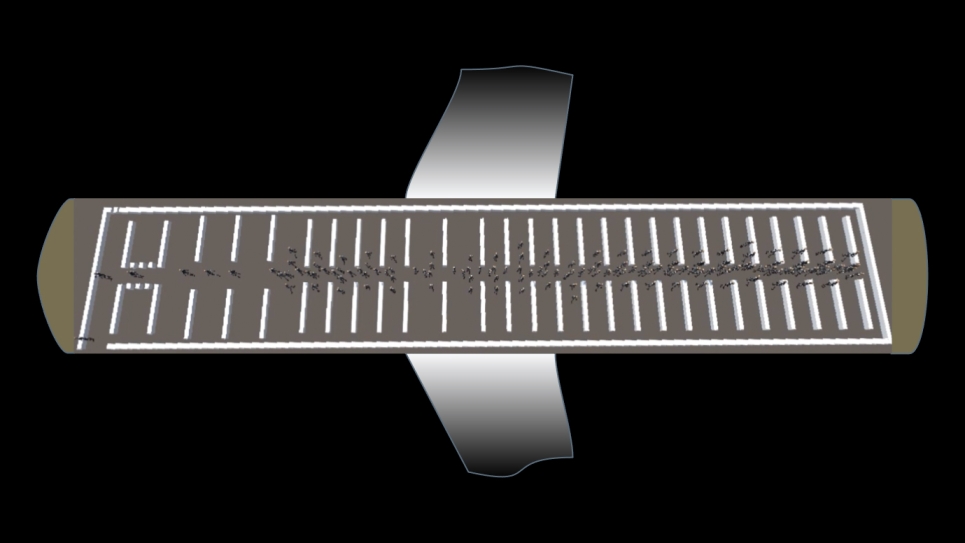 A snapshot from one of the team’s simulations of airplane boarding. Image: Ashok Srinivasan, University of West Florida

Since the outbreak of the COVID-19 pandemic, businesses have had to modify practices to help prevent exposure and slow the spread of the virus.

A recent study leveraging supercomputing resources at the U.S. Department of Energy’s (DOE) Argonne National Laboratory sought to clarify best practices in one particular case: how to mitigate the risk of infection among passengers when boarding airplanes.

The result was a publication whose basic conclusions indicate that many of the boarding procedures implemented during the pandemic could heighten the risk of transmission by increasing the social proximity of travelers.

Throughout the pandemic, many airlines have introduced revised boarding and in-flight procedures in an attempt to minimize the rate of infection for travelers. Such revisions include standardizing the order in which passengers board (for example, having passengers seated at the back of the plane board first).

As detailed in their paper, published in the journal Royal Society Open Science, the researchers, employing pedestrian dynamics for modeling, simulated an array of different boarding processes to determine whether they increased or decreased the rate of COVID transmission, and the reasons for the differences in risk.

“In designing this work, we looked to molecular dynamics for inspiration,” said Ashok Srinivasan, a computer scientist at the University of West Florida and author of the paper. “Our social dynamics models present pedestrians as a chemistry simulation would an atom. The momentum the pedestrian’s mass and velocity generate is directed toward the success of a given goal, the completion of which is obstructed by fixed surfaces (such as walls) and other atom-like pedestrians.”

The researchers measured social proximity by enumerating contacts between passengers, contact here defined as those instances in when two persons were within six feet of each other.

It was found that fewer seating zones encourage greater distribution of passengers throughout the plane, decreasing social proximity; conversely, more zones yielded more passengers seated in close proximity to each other throughout the boarding process.

In other words, single-zone scenarios minimized the risk of transmitting COVID-19 between passengers, and the procedure that mostly greatly reduced exposure was a policy of assigned seats combined with random boarding.

On the other hand, back-to-front boarding—shown to be the riskiest policy in most scenarios—roughly doubled the rate of exposure compared to random boarding of assigned seating and increased exposure by some 50 percent compared to standard pre-pandemic boarding procedures.

The researchers also examined the consequences of seating conflicts arising between passengers, as well as the impacts of policies that prohibit use of the overhead bins on planes.

“We concluded that prohibiting luggage from being stowed in the overhead bins can limit exposure,” Srinivasan said. “Additionally, to reduce the risk of transmission as much as possible, beyond implementing random boarding procedures, airlines should have passengers with window seats board prior to people assigned to aisle seats.”

Subsequent research from the team has demonstrated the effectiveness of N95 masks in mitigating the risk of in-flight disease transmission relative to other types of masks.