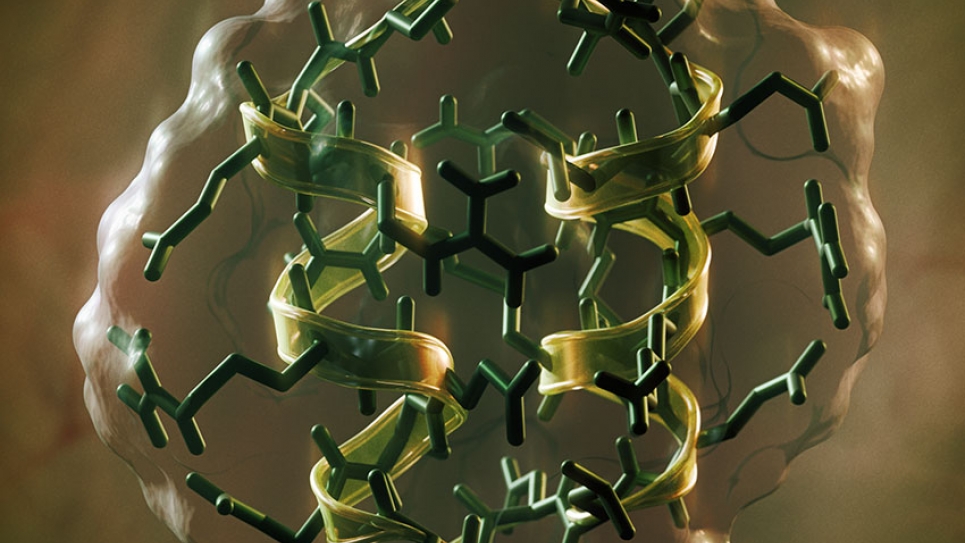 A team of researchers led by biophysicists at the University of Washington have come one step closer to designing tailor-made drug molecules that are more precise and carry fewer side effects than most existing therapeutic compounds.

With the help of the Mira supercomputer, located at the Argonne Leadership Computing Facility at the U.S. Department of Energy’s (DOE) Argonne National Laboratory, the scientists have successfully designed and verified stable versions of synthetic peptides, components that join together to form proteins. They published their work in a recent issue of Nature.

The computational protocol, which was validated by assembling physical peptides in the chemistry lab and comparing them to the computer models, may one day enable drug developers to craft novel, therapeutic peptides that precisely target specific disease-causing molecules within the body. And the insights the researchers gleaned constitute a significant advance in the fundamental understanding of protein folding.

“That you can design molecules from scratch that fold up into structures, some of which are quite unlike what you see in nature, demonstrates a pretty fundamental understanding of what goes on at the molecular level,” said David Baker, the University of Washington biophysicist who led the research. “That’s certainly one of the more exciting things about this work.”

The majority of drugs that humans use to treat the variety of ailments we suffer are so-called “small molecules.” These tiny compounds easily pass through different body systems to target receptor proteins studded in the membranes of our cells.

Most do their job well, but they come with a major drawback: “Most drugs in use right now are small molecules, which are very tiny and nonspecific. They bind to lots of different things, which produces lots of side effects,” said Vikram Mulligan, a postdoctoral researcher in Baker’s lab and coauthor on the paper.

More complex protein drugs ameliorate this problem, but they less readily disperse throughout the body because the more bulky molecules have a harder time passing through blood vessels, the linings of the digestive tract and other barriers.

And proteins, which are giant on the molecular scale, have several layers of structure that all overlap to make them less static and more dynamic, making predicting their binding behavior a tricky prospect.

But between the extremes of small, but imprecise, molecules and floppy, but high-specificity proteins, there exists a middle ground – peptides. These short chains of amino acids, which normally link together to make complex proteins, can target specific receptors, diffuse easily throughout the body and also sustain a rigid structure.

Some naturally-occurring peptides are already used as drugs, such as the immunosuppressant ciclosporin, but researchers could open up a world of pharmaceutical opportunity if they could design and synthesize peptides.

That’s precisely what Baker and his team did, tweaking the Rosetta software package that they built for the design of protein structures to accommodate synthetic amino acids that do not exist in nature, in addition to the 20 natural amino acids.

After designing the chemical building blocks of peptides, the researchers used the supercomputer Mira, with its 10 petaflops of processing power and more than 780,000 cores, to model scores of potential shapes, or conformations, that specific backbone sequences of amino acids might take.

“We basically sample millions and millions of these conformations,” said Yuri Alexeev, a project specialist in computational science at the Argonne Leadership Computing Facility, which is a DOE Office of Science User Facility. “At the same time you also improve the energy functions,” which are measurements to describe the efficiency and stability of each possible folding arrangement.

Though he was not a coauthor on the Nature paper, Alexeev helped Baker’s team scale up previous programs it had used to design proteins for modeling peptides on Mira.

Executing so many calculations simultaneously would be virtually impossible without Mira’s computing power, according to Mulligan.

“The big challenge with designing peptides that fold is that you have a chain of amino acids that can exist in an astronomical number of conformations,” he said.

Baker and his colleagues had tasked Mira with modeling millions of potential peptide conformations before, but this study stands out for two reasons.

First, the researchers arrived at a handful of peptides with specific conformations that the computations predicted would be stable.

Second, when Baker’s lab created seven of these peptides in their physical wet lab, the reality of the peptides’ conformations and stability corresponded remarkably well with the computer models.

“That’s exactly what we did in this paper,” he said. “We made a panel of these peptides that were designed to fold into very specific shapes, diverse shapes, and we experimentally confirmed that all of them folded into the shapes that we designed.”

While this experiment sought to create totally new peptides in stable conformations as a proof of concept, Mulligan says that the Baker lab is now moving on to design functional peptides with specific targets in mind.

Further research may bring the team closer to a protocol that could actually be used to design peptide drugs that target a specific receptor, such as those that make viruses like Ebola or HIV susceptible to attack.

The work is detailed in a paper in Nature, “Accurate de novo design of hyperstable constrained peptides.” Computer time was awarded by the Innovative and Novel Computational Impact on Theory and Experiment (INCITE) program; the project also used resources of the Environmental Molecular Sciences Laboratory, a DOE Office of Science User Facility at Pacific Northwest National Laboratory.