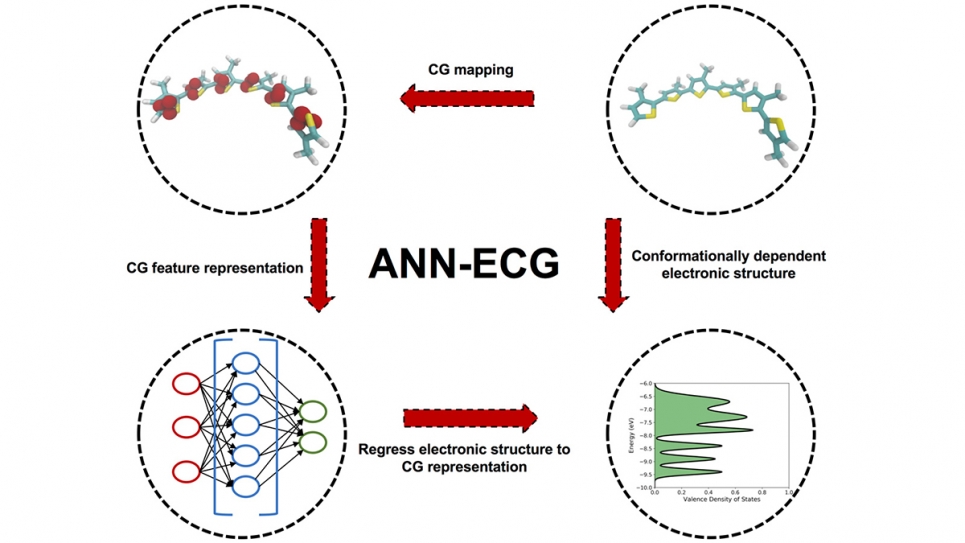 Organic electronics have the potential to revolutionize technology with their high cost-efficiency and versatility compared with more commonly used inorganic electronics. For example, their flexibility could allow companies to print them like paper or incorporate them into clothing to power wearable electronics. However, they have failed to gain much industry traction due to the difficulty of controlling their electronic structure.

To help address this challenge, Nick Jackson, a Maria Goeppert Mayer Fellow at the U.S. Department of Energy’s (DOE) Argonne National Laboratory, has developed a faster way of creating molecular models by using machine learning. Jackson’s models dramatically accelerate the screening of potential new organic materials for electronics and they could also be useful in other areas of materials science research.

The internal structure of an organic material affects its electrical efficiency. The current manufacturing processes used to produce these materials are sensitive, and the structures are extremely complex. This makes it difficult for scientists to predict the final structure and efficiency of the material based on manufacturing conditions. Jackson uses machine learning, a way of training a computer to learn a pattern without being explicitly programmed, to help make these predictions.

Jackson’s research focuses on vapor deposition as a means to assemble materials for organic electronics. In this process, scientists evaporate an organic molecule and allow it to slowly condense on a surface, producing a film. By manipulating certain deposition conditions, the scientists can finely tune the way the molecules pack in the film.

“It’s kind of like a game of Tetris,” said Jackson. ​“The molecules can orient themselves in different ways, and our research aims to determine how that structure influences the electronic properties of the material.”

The packing of the molecules in the film affects the material’s charge mobility, a measure of how easily charges can move inside it. The charge mobility plays a role in the efficiency of the material as a device. To study this relationship, and to optimize device performance, Jackson’s team runs extremely detailed computer simulations of the vapor deposition process.

“We have models that simulate the behavior of all of the electrons around each molecule at nanoscopic length and time scales,” said Jackson, ​“but these models are computationally intensive, and therefore take a very long time to run.”

To simulate the packing of entire devices, often containing millions of molecules, scientists must develop computationally cheaper, coarser models that describe the behavior of electrons in groups of molecules rather than individually. These coarse models can reduce computation time from hours to minutes, but the challenge is in making the coarse models truly predictive of the physical results. Jackson uses his machine learning algorithms to uncover the relationships between the detailed and coarse models.

“I drop my hands and leave it to machine learning to regress the relationship between the coarse description and the resulting electronic properties of my system,” Jackson said.

Using an artificial neural network and a learning process called backpropagation, the machine learning algorithm learns to extrapolate from coarse to more detailed models. Using the complex relationship that it finds between the models, it trains itself to predict the same electronic properties of the material using the coarse model as the detailed model would predict.

“We are developing cheaper models that still reproduce all of the expensive properties,” said Jackson.

The resulting coarse model allows the scientists to screen two to three orders of magnitude more packing arrangements than before. The results of the analysis from the coarse model then help experimentalists to more quickly develop high-performance materials.

Shortly after Jackson began his appointment under University of Chicago professor and Argonne Senior Scientist Juan de Pablo, he had the idea to accelerate his research with machine learning. He then took advantage of the laboratory’s high-performance computing capabilities by collaborating with Venkatram Vishwanath, Data Sciences and Workflows Team Lead with the Argonne Leadership Computing Facility, a DOE Office of Science User Facility.

Materials scientists have used machine learning before to find relationships between molecular structure and device performance, but Jackson’s approach is unique, as it aims to do this by enhancing the interaction between models of different length and time scales.

“In the physics community, researchers try to understand the properties of a system from a coarser perspective and to reduce the number of degrees of freedom to simplify it as much as possible,” said Jackson.

Although the targeted goal of this research is to screen vapor deposited organic electronics, it has potential application in many kinds of polymer research, and even fields such as protein science. ​“Anything where you are trying to interpolate between a fine and coarse model,” he added.

In addition to its broader applications, Jackson’s advancements will help propel organic electronics towards industrial relevance.