Science beyond Siri: A team of educators and computer scientists take on AI 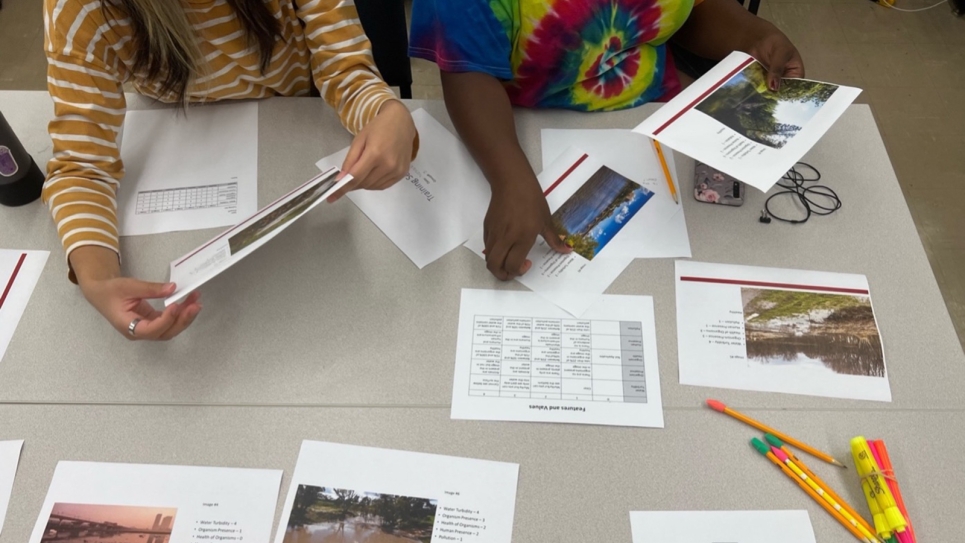 Soon enough, AI competency will be an essential workforce skill. A group of computer scientists and learning science experts are considering what a foundational introduction to AI might look like for middle school and high school students.

The rise of artificial intelligence (AI) and a branch of AI called machine learning, which focuses on the use of data and algorithms to imitate the way that humans learn, is rapidly changing the way data-intensive scientific discovery is being done.

Data-intensive science is a modern, exploration-centered style of science that heavily relies on advanced computing capabilities and software tools to manipulate and explore massive data sets. The introduction of new and better machine learning techniques is now being used to assist and automate scientific discovery of increasingly complex problems.

“AI research is making major strides,” said Michael E. Papka, a deputy associate laboratory director and supercomputing facility director at the U.S. Department of Energy’s (DOE) Argonne National Laboratory who is also a professor of computer science at the University of Illinois Chicago (UIC). ​“We are seeing progress in many areas of AI, made not only by new techniques, but especially by new hardware for running computationally intensive AI models.”

Two years ago, Papka and a like-minded group of STEM (science, technology, engineering and mathematics) educators, and computer scientists began meeting weekly to discuss a future workforce skills gap in addressing AI problems. They began to brainstorm about a new tool, or perhaps a teaching module, that would introduce AI concepts to the young researchers of tomorrow.

The team, which includes scientific and educational outreach staff from Argonne and STEM educators from Northern Illinois University (NIU) and UIC, wanted to explore areas where a future workforce undoubtedly will be needed: AI software developers and data science domain experts. Over several months, the group met with AI domain experts, early career scientists using AI systems in their research and graduate students who work on data science tools.

Some technologies are still in the experimental phase, including the growing collection of AI hardware found at the Argonne Leadership Computing Facility’s (ALCF) AI Testbed. Nevertheless, AI methods such as machine learning, which uses algorithms to parse and learn from input data, and deep learning, a subfield of machine learning that uses a complex structure of algorithms modeled on the human brain to learn and make decisions, are beginning to assist with profound scientific breakthroughs. These methods have predicted the 3D structures of proteins for medical research and have performed rote but vital tasks such as identifying optimal candidate materials for harvesting sunlight. The ALCF is a DOE Office of Science user facility.

Such developments will make AI competency an essential workforce skill. ​“Looking for ways to integrate AI methodology into scientific problems is the first step towards finding ways to bridge them,” said Meridith Bruozas, institutional partnerships director at Argonne and the AI collaboration team member helping develop the curriculum. ​“As a premier research organization, we have a keen interest in cultivating AI skills in the future workforce.”

Ideas began to take form for what a data-driven, research-based experience might look like. It would give the students access to large data sets, model real-world scientific practices, and introduce the AI-based methods that data scientists use to gain insight into a question of interest.

Lesson One: What is it?

Argonne is one of a growing number of research organizations that are incorporating powerful AI resources and techniques to drive new discoveries. But not all AI systems and techniques, such as machine learning, need to be powerful to make impactful contributions to society. An AI-powered system is any device or computer system that performs human intelligence tasks by leveraging complex data sets. Such systems can still be opaque; many people use AI models without knowing how they work. Understanding how to adjust the models to provide useful results is still a new and active area of research. The team saw a challenge in linking the technical aspects of AI to its potential to solve big problems in a way that interested students personally.

Building awareness of how machines can be used to simulate human intelligence processes seemed like a good starting point before moving onto solving problems — such as how to simulate data sets, how to build confidence in results and how to build training data sets that avoid the risks and shortcomings of AI-based methods.

“We had the expectation of zero programming experience, so we quickly landed on ways to potentially teach AI concepts from an ​‘unplugged’ data science perspective,” said John Domyancich, Argonne Learning Center lead.  ​“Activities to get them thinking about how to use data to answer questions and start to determine what other information they might need to reach an answer with a high degree of confidence.”

Another challenge for the team was one of scale: What type, and how much data would be required to be useful? And how would students begin to frame the questions they sought to answer?

In July 2021, the team ran a month-long summer pilot program with high school students recruited through NIU’s Upward Bound program. After being introduced to the broader concepts of AI and machine learning, students worked in groups to analyze AI-generated data sets using some of the same tools that scientists use to train different machine learning models, including Jupyter Notebooks.

They used Spotify data and models to learn how to identify a music genre, then how to catalog and recognize bird songs. ​“We asked them to think about how a human might approach the task, and then how a computer might approach the same task,” said Brenda Lopez Silva, one of the science educators who assisted with the pilot summer camp. ​“Spoiler alert: The computer basically learns what a human teaches it. That opened the door to some interesting discussions about how ethics might factor into AI today and in the future.”

In the summer of 2022, the team restructured the camp to be shorter and more intensive, and the activities relied on sensor-collected data about the environment in Northern Illinois. Students explored how computer vision might be used to optimize street crossings. Another task involved sorting and ranking images of a river to try to determine its pollution level. This time, the instructors used a different approach to link what students did using pen and paper to how scientists use machine learning to make discoveries.

For the river health activity, students attempted to verify their assumptions about the river by structuring the data available to them (images) and built a decision tree (a method for reaching a conclusion based on those inputs), only to realize that the data was insufficient to answer the question. ​“The task demanded an advanced level of thinking,” said Kristin Brynteson, director of NIU’s STEAM (science, technology, engineering, arts and mathematics) program, who led the AI camp sessions. ​“The students needed to see beyond the camera, to challenge the data and how it is labeled.”

“It may be possible that an AI system could infer river health starting with camera images, but it would require a lot of data for it to work,” said Nicola Ferrier, an Argonne senior computer scientist and AI domain expert who is consulting with the team. ​“This exercise was a good first step toward introducing concepts of pattern detection across features.”

The team noticed that once the students did a data-sorting and weighting activity by hand they were better able to grasp the algorithm and understand how a computer would do the same task. ​“It was educational for the students to reason through the information processing tasks instead of simply letting someone else’s algorithm do the work,” said Papka.

Much work lies ahead, but the team is closer to laying down the framework for a ​“classroom-usable” approach to teaching AI principles — one that also incorporates accessible technologies to serve as instruments for data collection and analysis. Leading contenders include sensor nodes, either purpose-built to collect student-driven investigations, or access to a data portal linked to an already-deployed sensor network.

“We are excited to be actively scoping out something that could provide an entry point for students to explore science and learn AI,” said Bruozas. ​“Something that serves as a portal for students to access and analyze data on demand and apply it to a problem they want to solve.”