The science of bubbles 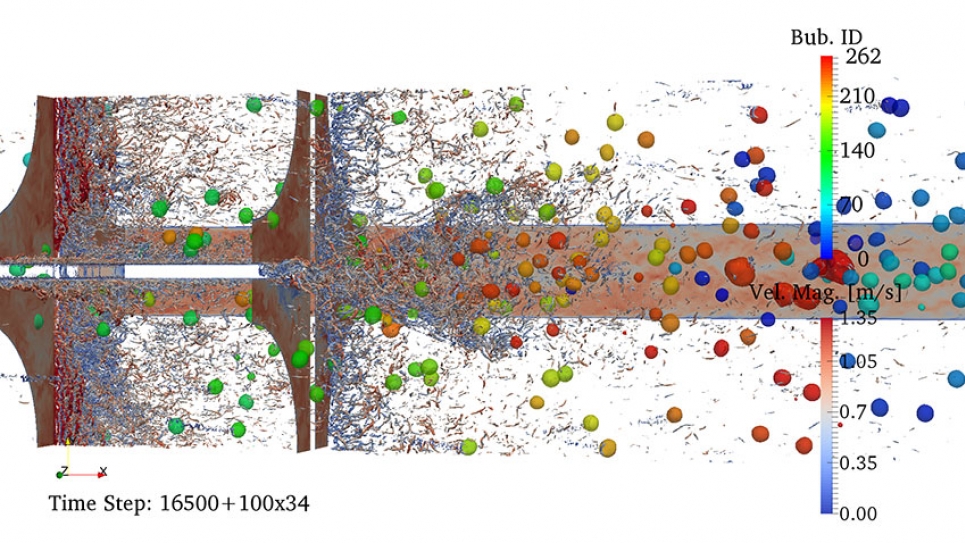 The intrinsic beauty of bubbles — those thin watery spheres filled with air or gas — have long captured the imagination of children and adults alike. But bubbles are also a lynchpin of nuclear engineering, helping to explain the natural world, predict safety issues, and improve the operation of the existing and next-generation nuclear fleet.

For many years, modeling this natural phenomenon was a challenging, time-consuming problem, with researchers largely limited to experiments that yielded only a few bubbles at a time. To generate the thousands of bubbles necessary to model and predict bubble behavior would have taken too long – upwards of 10 years.

Fortunately, high-performance supercomputers, like the Mira machine, located at the U.S. Department of Energy’s (DOE) Argonne National Laboratory, are allowing scientists to tackle ever-more-complex problems and solve them faster. These machines have been an especially welcome development for Dr. Igor Bolotnov, because bubbles are central to his research.

Bolotnov, a professor of nuclear engineering at North Carolina State University, is working to better understand boiling phenomena, bubble formation, and two-phase bubbly flow inside of nuclear reactors, which rely on water/steam conversion to produce energy.

“We are simulating bubbles in the reactor core so we can study bubble behavior at a level of detail experimentally that cannot be observed directly, due to the challenging conditions,” Bolotnov explained. “It’s one thing to simulate a couple of bubbles in trying to understand what’s going on in there. You really need to simulate thousands of them to understand the typical behavior.”

Even a decade ago, such simulation would have been impossible. But with the emergence of supercomputing, the data needed by Bolotnov was generated in the equivalent of three days on Mira.

Emily Shemon is a nuclear engineer in Argonne’s Nuclear Engineering division and a member of the science team at the Argonne Leadership Computing Facility (ALCF), which houses Mira and provides supercomputing capabilities to the scientific and engineering community. Supported by the DOE’s Office of Science, Advanced Scientific Computing Research (ASCR) program, ALCF is one of two DOE Leadership Computing Facilities in the nation dedicated to open science.

According to Shemon, who served as Bolotnov’s liaison at Argonne, there is a competitive process for using Mira; far more researchers want to use the machine than can be supported, even with Mira running 24 hours a day. Bolotnov obtained his allocation award through the ASCR Leadership Computing Challenge (ALCC).

“One of the things that distinguishes the ALCC award program from others is that recipients tend to be from strategic scientific areas,” Shemon said. “And nuclear energy is considered a strategic area of research.”

In November 2017, Bolotnov and Jun Fang, a postdoctoral researcher at the ALCF, published a paper in Nuclear Engineering and Design, detailing their development of a novel bubble tracking method that can collect detailed two-phase flow information at the individual bubble level. This advanced analytical framework will help researchers to gain insights from the “big data” produced by the large-scale simulations.

When it comes to ultimately improving the safety and operation of nuclear reactors, Bolotnov’s research is a critical piece of an even larger puzzle. Overseeing that effort is Oak Ridge National Laboratory’s Jess Gehin, who is director of the Consortium for Advanced Simulation of Light Water Reactors (CASL), the DOE’s first Energy Innovation Hub.

CASL was established in 2010 and is on an aggressive 10-year mission to confidently predict the performance of existing and next-generation commercial nuclear reactors through comprehensive, science-based modeling and simulation, in part by leveraging leadership-class supercomputers like Mira.

Gehin said that Bolotnov’s work, which is funded by CASL, is essential to addressing one of the program’s key “challenge problems”: formation of bubbles on the surface of a nuclear fuel rod (stemming from a phenomenon known as departure from nucleate boiling).

“When you have boiling, it affects heat transfer. But if you get too much vapor formation, that can inhibit heat transfer,” Gehin explained. “That’s a design limit for nuclear reactors. The more you understand how close you are to that limit, the more flexibility you have in the operation of the plant.”

According to Gehin, CASL is already seeing promising results; the program will likely achieve a major milestone later this year involving next-generation closure models, which will be incorporated into computational fluid dynamic software. “The intent is, with more fundamental models, we can directly simulate the departure from nucleate boiling effect, rather than rely as much as we do on experiments.”

With private industry also directly involved in CASL and extremely interested in these particular outcomes, Gehin said the pathway for real-world applications is clear, as is the enduring value of public support for fundamental scientific research.

“This is a sweet spot in terms of public-private partnerships.”