In search of a signal 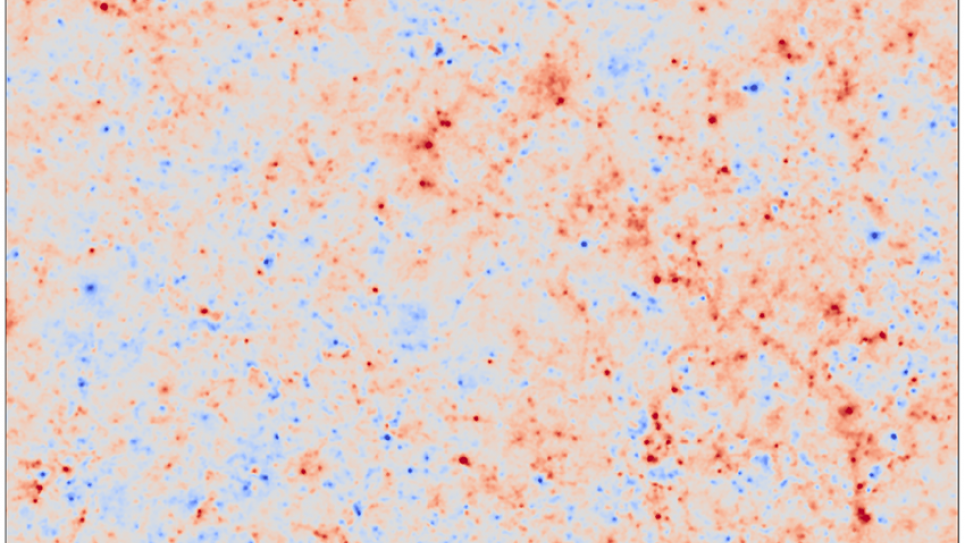 A research team from Argonne National Laboratory and McGill University is performing simulations at the Argonne Leadership Computing Facility (ALCF), a U.S. Department of Energy (DOE) Office of Science User Facility, to construct cosmological maps that will help improve the analysis of data from two of the world’s most powerful astronomical instruments, the Dark Energy Survey and the South Pole Telescope. The enhanced maps will allow scientists to better understand the gravitational forces at work on large-scale structures in the universe—and by extension some of cosmology’s greatest mysteries such as dark energy and dark matter.

For centuries, science rested on two pillars: theory and experiment.

With the advent of massive computing resources such as the ALCF’s Mira supercomputer, however, simulation now stands alongside theory and experiment as the third pillar of scientific inquiry, an invaluable tool for the investigation of the natural world at the smallest, and largest, scales.

And when it comes to the latter, few things are larger than galaxy clusters; in fact, they are the largest bound structures in the universe. No matter the sophistication of your scientific facilities, recreating the dynamics of clusters of galaxies in any laboratory is likely off limits, for obvious reasons.

But thanks to simulation, researchers can now piece together what the large-scale universe looks like, particularly when leadership-class supercomputers are used in concert with equally powerful observational resources.

And that’s precisely what a team from Argonne National Laboratory and McGill University is doing: harnessing the power of Mira to enable the analysis of data from two of the world’s most powerful astronomical instruments, the Dark Energy Survey (DES) and the South Pole Telescope (SPT). Using the Hybrid/Hardware Accelerated Cosmology Code (HACC), the researchers have run the first trillion-particle high-resolution cosmological simulation in an effort to better understand the evolution and structure of the universe.

This enhanced understanding relies heavily on data collected on the cosmic microwave background (CMB), the oldest light in the universe, and surveys of large-scale cosmic structure such as those done by DES, an international, collaborative effort to map hundreds of millions of galaxies, detect thousands of supernovae, and find patterns in the observed universe that could help explain the nature of dark energy—the mysterious force that scientists believe is responsible for the accelerated expansion of the universe.

Scientists combine data from observations and simulations to help them detect a subtle observational signal known as the pairwise kinematic Sunyaev-Zel’dovich (kSZ) effect, which describes how photons in the CMB are affected as they pass through clusters of galaxies.

The total effect is made up of both a thermal and a kinematic component. The kinematic effect is much smaller than the other, but because it has the potential to measure the velocity of large-scale objects moving through the universe, such as galaxy clusters, it could prove an invaluable tool in unraveling the gravitational forces at work on large-scale structures. But first researchers must better understand it.

Enter Argonne researchers Salman Habib, Katrin Heitmann, and Samuel Flender, who along with their colleagues, have used Mira to run simulations that have been instrumental in the detection of the kSZ signal via the cross-correlation of data from DES and SPT. Their results, profiled in Astrophysical Journal, provide an important advance in determining the velocities of these enormous cosmological structures and a key element to explaining the nature of dark energy.

“In cosmology, you cannot do controlled experiments,” said Heitmann, who studies the evolution and structure of the universe. “With the incredibly detailed simulations we can run on machines like Mira we are trying to create a universe in the lab, an environment that allows us to carry out controlled studies of possible hidden systematic effects that could affect the signal we are looking for in the experimental data.”

Originally postulated in 1972 by Russian physicists Rashid Sunyaev and Yakov Zel'dovich, the kSZ effect was thought to be so faint as to be virtually undetectable, said Heitmann. For despite the unprecedented observational abilities of the SPT and DES, there is a certain amount of error inherent in these observations of far-distant objects that could hide the effect she and her colleagues are looking for

The team’s HACC simulations lack this experimental error and are therefore ideal for pairing with observations to determine the precise distance between galaxies and galaxy clusters, and their relative velocities. It was this pairing that allowed the DES and SPT to improve its long-distance observational errors and detect that faint, yet critical, signal. Flender, who led the simulation analysis and was a key contributor to the data analysis said: “Using the output from state-of-the-art cosmological simulations, we were able to produce realistic mock data that helped us obtain a better understanding of the actual uncertainties related to current and future experimental measurements of the kSZ effect.”

The mock data has been analyzed to produce predictions of the kSZ effect in the form of simulated full-sky maps that will prove an essential tool for the analyses of experimental data from both the DES and the SPT.

“DES and SPT recently combined to make the first detection of the kSZ effect from our early data,” said DES Director Josh Frieman of Fermilab and the University of Chicago. “These simulations will be critical for interpreting the more sensitive measurements we expect to make with more data in the next couple of years.”

The new results will also aid researchers in their attempts to decipher the physical parameters of the largest cosmological structures and shed light on that most fundamental of mysteries, dark energy.

A peek back in time

Not everything is at it seems, particularly when looking far out into space, where the speed of light traveling from far-off galaxies robs us of the present. “The further away you look, the further back in time you are looking. Our observations are dependent on the speed of light,” said Hal Finkel, ALCF computational scientist and co-author of the team’s Astrophysical Journal paper.

It was Finkel, a key developer of HACC, who developed and implemented algorithms to allow for the construction of light cones, or wedges of data that show the paths light takes over time. While the output of the simulations is given by depictions of the universe at fixed “time slices,” these light cones must be generated by translating this output in order to model realistic observations, which, due to the speed of light, necessarily look further back in time as one looks at objects further away.

These time slices need to be translated to present observations, hence the handiness of his light-cone analysis code, a critical element in the detection of the elusive, and immensely useful, kSZ signal.

After all, only by merging the power of simulation and observation can we truly hope to understand a problem as complex as our universe.

This research is supported the DOE Office of Science. Computing time at the ALCF was allocated through the Innovative and Novel Computational Impact on Theory and Experiment (INCITE) program.