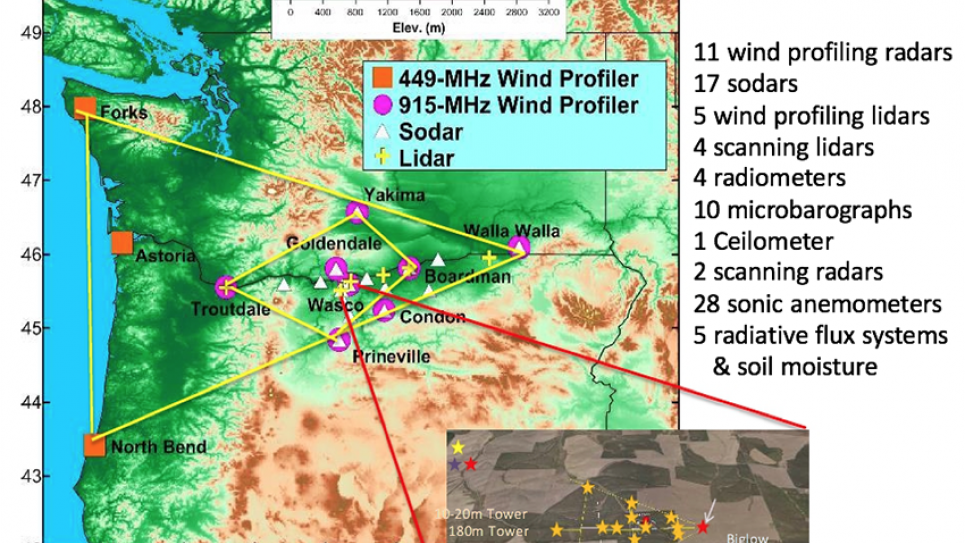 A research team led by the National Oceanic and Atmospheric Administration (NOAA) is performing simulations at the Argonne Leadership Computing Facility (ALCF), a U.S. Department of Energy (DOE) Office of Science User Facility, to develop numerical weather prediction models that can provide more accurate wind forecasts in regions with complex terrain. The team, funded by DOE in support of its Wind Forecast Improvement Project II (WFIP 2), is testing and validating the computational models with data being collected from a network of environmental sensors in the Columbia River Gorge region.

Wind turbines dotting the Columbia River Gorge in Washington and Oregon can collectively generate about 4,500 megawatts (MW) of power, or more than that of five, 800-MW nuclear power plants. However, the gorge region and its dramatic topography create highly variable wind conditions, posing a challenge for utility operators who use weather forecast models to predict when wind power will be available on the grid.

If predictions are unreliable, operators must depend on steady power sources like coal and nuclear plants to meet demand. Because they take a long time to fuel and heat, conventional power plants operate on less flexible timetables and can generate power that is then wasted if wind energy unexpectedly floods the grid.

To produce accurate wind predictions over complex terrain, researchers are using Mira, the ALCF’s 10-petaflops IBM Blue Gene/Q supercomputer, to increase resolution and improve physical representations to better simulate wind features in national forecast models. In a unique intersection of field observation and computer simulation, the research team has installed and is collecting data from a network of environmental instruments in the Columbia River Gorge region that is being used to test and validate model improvements.

This research is part of the Wind Forecast Improvement Project II (WFIP 2), an effort sponsored by DOE in collaboration with NOAA, Vaisala—a manufacturer of environmental and meteorological equipment—and a number of national laboratories and universities. DOE aims to increase U.S. wind energy from five to 20 percent of total energy use by 2020, which means optimizing how wind is used on the grid.

“Our goal is to give utility operators better forecasts, which could ultimately help make the cost of wind energy a little cheaper,” said lead model developer Joe Olson of NOAA. “For example, if the forecast calls for a windy day but operators don’t trust the forecast, they won’t be able to turn off coal plants, which are releasing carbon dioxide when maybe there was renewable wind energy available.”

The complicated physics of wind

For computational efficiency, existing forecast models assume the Earth’s surface is relatively flat—which works well at predicting wind on the flat terrain of the Midwestern United States where states like Texas and Iowa generate many thousands of megawatts of wind power. Yet, as the Columbia River Gorge region demonstrates, some of the ripest locations for harnessing wind energy could be along mountains and coastlines where conditions are difficult to predict.

“There are a lot of complications predicting wind conditions for terrain with a high degree of complexity at a variety of spatial scales,” Olson said.

Two major challenges include overcoming a model resolution that is too low for resolving wind features in sharp valleys and mountain gaps and a lack of observational data.

At the NOAA National Center for Environmental Prediction, two atmospheric models run around the clock to provide national weather forecasts: the 13-km Rapid Refresh (RAP) and the 3-km High-Resolution Rapid Refresh (HRRR). Only a couple of years old, the HRRR model has improved storm and winter weather predictions by resolving atmospheric features at 9 km2—or about 2.5 times the size of Central Park in New York City.

At a resolution of a few kilometers, HRRR can capture processes at the mesoscale—about the size of storms—but cannot resolve features at the microscale, which is a few hundred feet. Some phenomena important to wind prediction that cannot be modeled in RAP or HRRR include mountain wakes (the splitting of airflow obstructed by the side of a mountain); mountain waves (the oscillation of air flow on the side of the mountain that affects cloud formation and turbulence); and gap flow (small-scale winds that can blow strongly through gaps in mountains and gorge ridges).

To make wind predictions that are sufficiently accurate for utility operators, Olson said they need to model physical parameters at a 750-m resolution—about one-sixth the size of Central Park, or an average wind farm. This 16-times increase in resolution will require a lot of real-world data for model testing and validation, which is why the WFIP 2 team outfitted the Columbia River Gorge region with more than 20 environmental sensor stations.

“We haven’t been able to identify all the strengths and weaknesses for wind predictions in the model because we haven’t had a complete, detailed dataset,” Olson said. “Now we have an expansive network of wind profilers and other weather instruments. Some are sampling wind in mountain gaps and valleys, others are on ridges. It’s a multiscale network that can capture the high-resolution aspects of the flow, as well as the broader mesoscale flows.”

Many of the sensors send data every 10 minutes. Considering data will be collected for an 18-month period that began in October 2015 and ends March 2017, this steady stream will ultimately amount to about half a petabyte. The observational data is initially sent to Pacific Northwest National Laboratory where it is stored until it is used to test model parameters on Mira at Argonne.

The WFIP 2 research team needed Mira’s highly parallel architecture to simulate an ensemble of about 20 models with varied parameterizations. ALCF researchers Ray Loy and Ramesh Balakrishnan worked with the team to optimize the HRRR architectural configuration and craft a strategy that allowed them to run the necessary ensemble jobs.

“We wanted to run on Mira because ALCF has experience using HRRR for climate simulations and running ensembles jobs that would allow us to compare the models’ physical parameters,” said Rao Kotamarthi, chief scientist and department head of Argonne’s Climate and Atmospheric Science Department. “The ALCF team helped to scale the model to Mira and instructed us on how to bundle jobs so they avoid interrupting workflow, which is important for a project that often has new data coming in.”

The ensemble approach allowed the team to create case studies that are used to evaluate how each simulation compared to observational data.

“We pick certain case studies where the model performs very poorly, and we go back and change the physics in the model until it improves, and we keep doing that for each case study so that we have significant improvement across many scenarios,” Olson said.

At the end of the field data collection, the team will simulate an entire year of weather conditions with an emphasis on wind in the Columbia River Gorge region using the control model—the 3-km HRRR model before any modifications were made—and a modified model with the improved physical parameterizations.

“That way, we’ll be able to get a good measure of how much has improved overall,” Olson said.