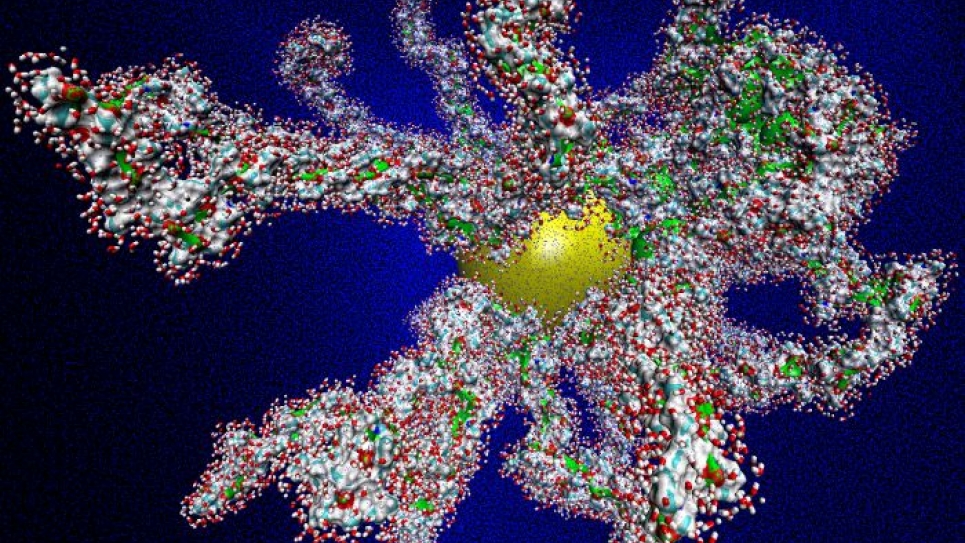 Chemists have been looking at polymers and gels for decades to see how these large chains of molecules respond to external stimuli such as heat, pH, temperature, electric fields, light and chemical influences. The scientists seek ways to control the polymers’ actions and behaviors for a wide range of applications: drug delivery, medical diagnostics, tissue engineering, electrophoresis and enhanced oil recovery.

Certain smart polymers, for instance, rely on heat, water and timing to execute their missions in controlled drug delivery systems.

The key to employing a polymer is controlling its lower critical solution temperature (LCST). When reached, the LCST triggers a dramatic conformational change in which the polymer chain goes from an expanded coil state to a collapsed, globular one.

If, for instance, a drug is attached to this polymer and it’s given to a person, when his body temperature goes above 98.6 F, the polymer will collapse from the coil-globule transformation and releases the drug. When body temperature returns to normal, the collapsed globule reforms as a coil.

Staff scientist Subramanian Sankaranarayanan at the Center for Nanoscale Materials at Argonne National Laboratory (ANL) probes the nature and dynamics of these conformational changes in specific polymer types. To aid the research, the Department of Energy’s ASCR Leadership Computing Challenge (ALCC) awarded him and his colleagues 50 million processor hours at Argonne’s Leadership Computing Facility. This year the researchers received another 170 million processor hours from ALCC to continue their research.

Sankaranarayanan says his team is studying how polymers “respond to temperature, so that when we systematically heat and cool these polymers across their LCST, we (can) observe how their conformations change and respond to their environment, in particular water.

“The only way to do this proficiently was with the supercomputing power” of Argonne’s Blue Gene machines. “If we want to make any direct comparisons from simulations to our actual experimental efforts, we need to simulate a chain of at least 100 monomeric units, and that is a big system.”

They also simulated atoms combined to form a grain. This so-called coarse-graining allows, for instance, CH3 to be represented as a single entity rather than a carbon atom bonded to three hydrogens. This accelerated simulations but was less accurate than atom-by-atom resolution and less precise in characterizing parameters such as viscosity, atomistic structure of water and hydrogen bonding.

“We adopt both as a compromise between speed and accuracy,” Kamath says.

A key finding was that water dictates the whole process of conformational dynamics, from coil to globule to coil. That had been the group’s hypothesis going in.

Deshmukh explains. “How these chains undergo phase transition has not been really clear. People have attributed it to the hydrophobidity or hydrophilicity” – repulsion or attraction to water – “of the polymer, but we see it as the way that water forms an ordered structure around these polymer chains when they are below the LCST. When we heat up the chain, these structures break first, preceding the collapse of the polymer. So, breakage of ordered water acts as the precursor to the collapse.”

One common ordered structure is a cage bound around hydrophobic groups. Kamath says that “this cage-like structure is what actually keeps the polymer in a coil-like state below the LCST, and when the polymer reaches that temperature, the cage breaks down, leading to the collapse of the polymer. The hydrogen-bonding network in water and the interaction of the water with the polymer and the polymer itself” dictates a coil’s transition to glob.

Sankaranarayanan and his group simulated phase transitions in three classes of polymers: single-chain, co-polymerized structures and hydrogels. Co-polymers are made of different monomer building blocks joined in the same polymer chain. Hydrogels are crosslinked polymers that are extraordinarily absorbent: they can swell up to 99 percent by weight in water.

Researchers are experimenting with smart polymers, especially hydrogels, for drug delivery systems, but “nobody really knows exactly how they work,” Sankaranarayanan says. “They’ve been characterized to the extent where it’s known that PNIPAM, for example, has an LCST around room temperature, but still the degree of control to realize efficient drug delivery is not there yet.”

The group also simulated co-polymerized structures, working primarily with PNIPAM and polyethylene glycol (PEG). They examined the conformational change when PNIPAM is co-polymerized with PEG to shift the hybrid’s LCST around, so that it would theoretically operate consistently at room temperature.

“Exercising a very precise control is not very easy because factors besides heat – pH, light, solvent media in contact with the polymer, the electric field or other chemical stimuli – also influence LCST transition,” Sankaranarayanan says.

The biomedical field has a keen interest in hydrogels which, when they collapse, form a 3-D lattice that could serve as a scaffold in a drug delivery system. In contrast to an in vitro implant of such a lattice, this natural system would be far less invasive, involving only an injection of the hydrogel-drug. The polymer’s thermosensitive ability could then regulate activating the scaffold and releasing the drug.

The researchers simulated grafted structures, in which polymers are affixed to particles or surfaces, again to gauge its effects on polymer control. The simulations grafted PNIPAM, for instance, onto nanoparticles or flat surfaces to make it more site specific and to see how conformations change with graft intensity: if the structure is too dense, they found stronger interactions with neighboring polymer chains; less dense, weaker interactions.

Sankaranarayanan believes the project will provide insights into fundamental interfacial science, which drives these kinds of conformational transformations. The simulations will offer an answer to the evolution of conformational dynamics from single isolated polymer chains to their macromolecular assemblies, such as grafted polymers.