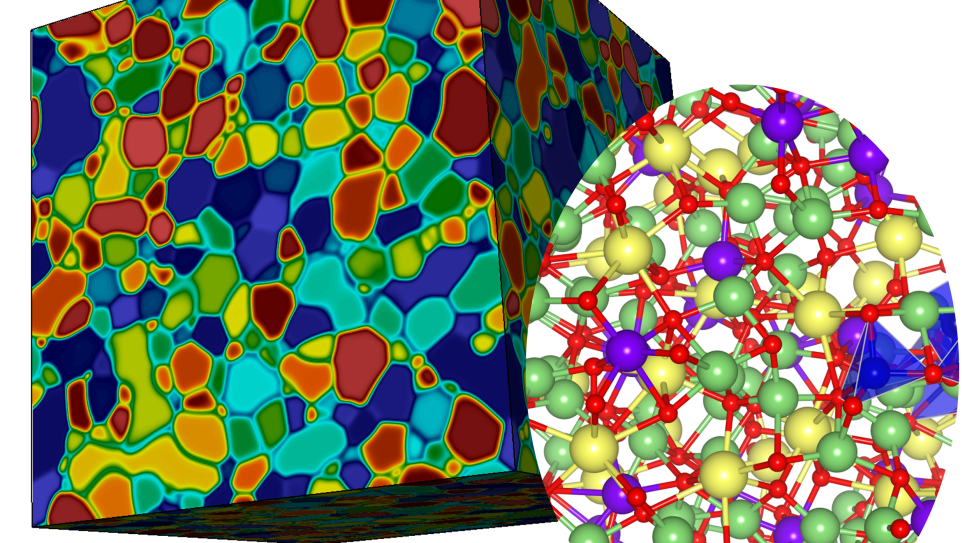 Perfection is a problem when it comes to how computers model materials for energy applications. Although a typical model assumes materials are perfect, in reality they have flaws at their interfaces and boundaries.

These imperfections, says Lawrence Livermore National Laboratory (LLNL) researcher Brandon Wood, “are often where the action is, particularly for ion transport,” a key process in the performance of batteries, hydrogen production and storage systems, and of electrocatalysts, all of which are vital to decarbonizing the atmosphere. “We want to understand these boundary regions, so we threw lots of high-performance computing power at it,” says Wood, hydrogen and computational energy materials associate program lead and deputy director of the LLNL’s Laboratory for Energy Applications for the Future.

That computer power comes from the Department of Energy’s INCITE (Innovative and Novel Computational Impact on Theory and Experiment) program. With their allocation on Argonne National Laboratory’s Theta supercomputer, Wood and his colleagues are simultaneously running many medium-sized simulations to span the myriad possibilities that are unique to interfaces. Without Theta, Wood says, “we’d be able to look at one aspect of the problem, maybe certain atomic arrangements or a certain chemistry, but certainly not the range of combinations to see the whole picture.”

To deal with disorder at ion interfaces, Wood and colleagues needed to computationally capture it at the atomic scale. Meanwhile, they wanted to explore other ion transport issues, such as battery cycling speed, cycling durability, system passivity loss and how all these properties relate in material processing.

The team built a multiscale framework that computes ions at the atomic scale, complete with fully resolved atoms and molecules, to examine atomic disorder and ion mobility. The researchers put that framework into a larger-scale model that can access features the atomic-scale model can’t, such as complex arrangements of interfaces alongside ordered regions, a property called microstructure.

One of the larger-scale models showed it’s not just the atomic disorder or the arrangements of interfaces that matter for ion transport; it’s also how the two couple, says Tae Wook Heo, who leads the project’s microstructure-level modeling component. “They’re interdependent in a way we didn’t expect.”

The team used computation to map these interdependencies and discovered that a device’s  operating temperature also affects the interfaces’ arrangements and their nature. All three of these variables are intertwined.

It’s a complex design space to navigate when engineers try to make a better device, Wood says, because every change in chemistry affects everything else.

“We need to understand how all of these different factors talk to each other, and there’s an additional layer of complexity because the relationship itself depends on operating conditions such as temperature or pressure,” Wood says. “This relationship between operating conditions, materials properties at the atomic scale, and materials properties at the mesoscale” – larger than atomic scale – “is the crux of what we’re trying to get at.”

The researchers detoured midway through the project to approximate interactions between atoms via machine-learning methods. The techniques train the system to guess what atoms should look like if their orientation and arrangement change. It was a difficult task. The team had to discover a way to use machine learning so it provided the trio of accuracy, efficiency and transferability.

Sabrina Wan, an LLNL materials scientist on the INCITE team, says “transferability, in this case, was the most problematic. It means that you need to guarantee when you make a new atomic arrangement you can retain the accuracy you had in your original atomic arrangement. This is especially critical for modeling interfaces.” The researchers responded with a new algorithmic engine that lets them access atomic-scale interface models thousands of times more quickly than with the original process.

In later phases of the project, the researchers dug into changing both material composition and microstructure to see how these alterations affect performance and operating conditions at the atomic and mesoscales. Again, they found all these relationships shift.

“We’re essentially simulating what happens if you change chemical processing conditions and make materials in different ways,” Wood says. “However you make something, you can introduce chemical reagents that change the composition and properties of the interface. The possibility space arising from these changes is much larger than even changing the atomic arrangement.”

The researchers can now map all the variables and processing methods. “It’s giving guidance in not only ideally what I would want but also hints of how to make it,” Wood says. “If you change your chemical composition in a certain way and alter the processing temperature in another way, it will manifest as improved performance or an improved tradeoff between the different factors relevant in these materials.”

This is only a hint of the possibilities. Although he’s cautious not to oversell the team’s work, Wood says “this is very exciting because it’s rare that linkage can be made between the process of how materials are made and their performance.”

The researchers are focusing on two applications: solid-state batteries and hydrogen-storage materials. Both are relevant to high-capacity energy storage.

Solid-state batteries can pack in more energy than conventional batteries by replacing their liquid electrolyte solution with “a special solid designed to shuttle ions back and forth very quickly,” Wood says. “There are a few materials that do this, but always with various tradeoffs. We’d like to develop an optimized solution by understanding how these materials function and how they can do so most effectively, without degradation.”

These models someday may also be used for other energy applications, such as fuel cells, thermal energy storage and conversion devices and electrocatalytic reactors.

Wood also is applying the same models to corrosion, which likewise involves a complicated dance between chemical reactions and ions moving through a solid material. “Once again, it’s all about interfaces – these short-circuit interfacial pathways play a huge role in material corrosivity,” he says. “We’re translating this to predict things such as how steel on a bridge corrodes under seawater conditions and how gas turbines fail under high-temperature operation.”