A window into solar 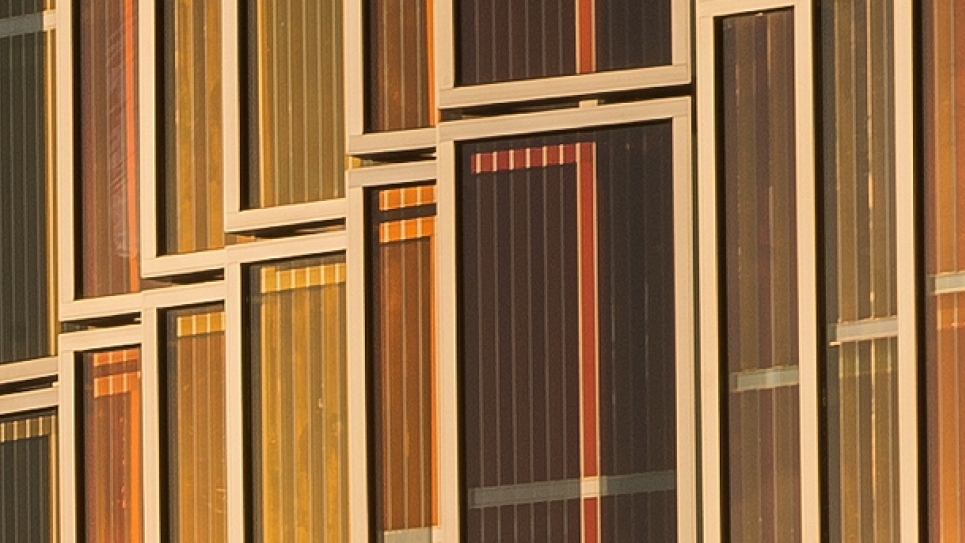 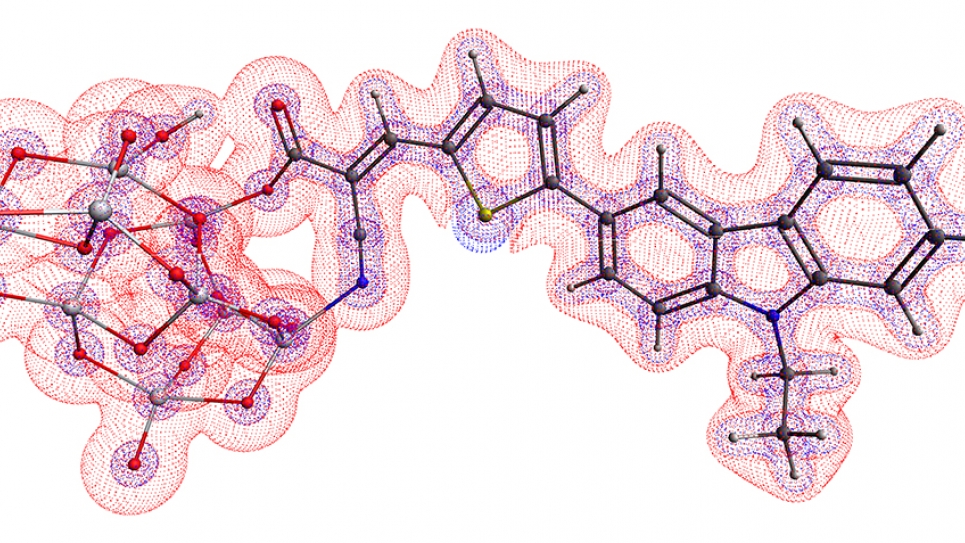 Buildings consume an estimated 40 percent of energy used in the United States – a burden that also represents a renewable energy opportunity.

If researchers could turn windows and other structural components into solar energy cells, they could feed into a sustainable local power grid to heat, cool and light businesses and homes. Toward this goal, a research team at the University of Cambridge and the Argonne Leadership Computing Facility (ALCF), a Department of Energy Office of Science user facility, are seeking affordable, efficient chemical components of photovoltaic devices to embed in glass.

A core challenge in developing solar cell technology is finding molecules able to efficiently absorb energy from the sun and eject an electron into a semiconductor that initiates a solar cell circuit. The most efficient solar cell technology employs rare metals that are too expensive for wide use and aren’t environmentally sustainable or transparent.

Jacqueline Cole and her University of Cambridge team have been interested in building dye-sensitized solar cells that take advantage of economical and environmentally sound organic (carbon-based) molecules. From inside the glass, these dyes – molecules that harvest light from the sun – could turn a skyscraper’s extensive window area into a vast solar cell network.

Yet, like drug discovery and other problems in chemistry, researchers struggle with systematic ways to find the right molecules to overcome this challenge. The dye-sensitized solar cell field made a major stride in the early 1990s, when researchers found the first organometallic dyes with reasonable efficiencies, Cole says. Since then, however, the field has progressed in fits and starts. Serendipity helped researchers find new dyes that worked a bit better. Chemists might then make small tweaks to improve them and test their effects. Although that process allows for some progress, she notes, “what it won’t do, by definition, is actually find a new chemical class of dyes.”

In 2009, Cole and her team decided to use a more holistic approach for discovering new dyes for solar-powered windows. In a pilot study, they turned to data-mining, using a computer cluster in Cambridge. They scanned a portion of the Cambridge Structural Database, which includes nearly 120,000 organic molecules that have been well characterized, seeking what they call “molecular Legos” – special structural features for a new, efficient dye molecule. The team encoded its design rules into algorithms and searched the database, sifting for molecules that have the right components, such as charge separation between electron donor and acceptor components and π-conjugation, a feature that allows electrons to flow across a molecule. This approach, combined with their judgment, afforded a molecule that they then synthesized, optimized and tested in the laboratory.

The study validated the group’s approach for discovering dyes, but it’s only a first step. Although 120,000 might seem like a large number of molecules, it’s just a minuscule portion of all chemical possibilities, which exceed 1060, notes Álvaro Vázquez-Mayagoitia, a computational chemist at the DOE’s Argonne National Laboratory. In 2016, the ALCF launched its Data Science Program, a competitive funding opportunity to use high-performance computing (HPC) resources on big-data problems like this one. Cole’s project was one of the first four supported through the program, which backs work to analyze large datasets rather than run large-scale calculations.

With HPC resources and collaboration with ALCF, Cole and her team have expanded her work in a couple of ways. First, they are building a larger database of organic molecule candidates with desirable structural and electronic qualities. Chemists have been publishing structural and optical absorption characteristics for years, but this information isn’t compiled systematically or in a single location. Combing through hundreds of thousands of research articles to find it isn’t practical, so Cole’s team has developed software that automatically extracts chemical structure and light absorption properties of molecules from published research articles and assembles them into a database.

The ALCF work also will allow them to seek the right combination of those molecular Legos in larger databases of candidate molecules. Their molecular design rules help them narrow the search, and they are using machine-learning strategies to help translate a chemist’s knowledge and intuition into accurate computational filtering. These algorithms will look for structural components in molecules – the arrangement of chemical groups that can serve as electron donors or acceptors, separated by linkers that can shuttle an electron between those two important parts of the molecule. They’re also looking at electronic features of these dyes – as light hits a dye it excites an electron in the molecule, but electrons face restrictions in how they can be transferred. For example, if energy levels in the donors and acceptors don’t correctly align with material components of other parts of the photovoltaic device, a molecule fails as a dye candidate. These criteria serve as a set of funnels that allow the researchers to gradually narrow down a large database by roughly a factor of 10 at each step, Vázquez-Mayagoitia says.

Because these algorithms allow encoding chemistry within mathematical equations, Cole and her team can determine a variety of information about their database of dye candidates, including optical properties, even if that information has not been tested experimentally. Their optical property calculations take advantage of NWChem, supercomputing software developed at DOE’s Pacific Northwest National Laboratory. Much of the team’s work now is in designing how its algorithms work together for efficient computer use and effective translation of chemistry into computational language.

Now a quarter of the way through this two-year project, the researchers are developing a new database of 80,000 compounds by auto-extracting chemical information from 300,000 published articles along with their optical absorption properties. In the next six months, they plan to start funneling these candidate molecules through their data-mining algorithms. By the end of this initial collaboration, they hope to identify a short list of novel dye candidates they can synthesize and test in laboratory experiments.

Cole hopes this collaboration is just a first step in using large-scale data science to find new dyes for solar windows. ”The very first time you do this you learn a lot and you get an answer,” she says. But the feedback from those results pushes calculations and studies even further, so they hope to continue this work after the initial study. “You need to go through this kind of feedback loop, get results, find out what was good, what was bad, go back in and repeat that cycle.”