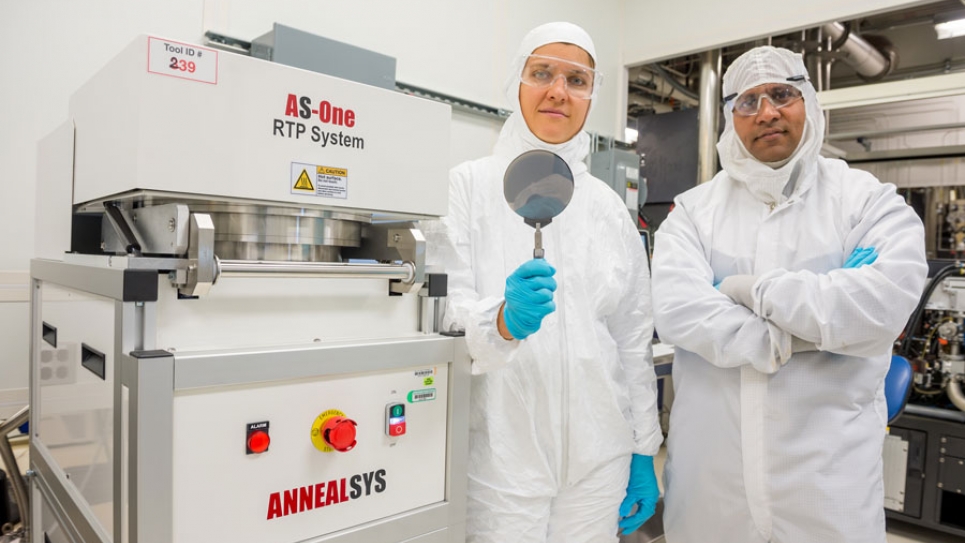 Graphene is the stuff of the future. For years, researchers and technologists have been predicting the utility of the one-atom-thick sheets of pure carbon in everything from advanced touch screens and semiconductors to long-lasting batteries and next-generation solar cells.

But graphene’s unique intrinsic properties – supreme electrical and thermal conductivities and remarkable electron mobility, to name just a few – can only be fully realized if it is grown free from defects that disrupt the honeycomb pattern of the bound carbon atoms.

A team led by Materials Scientist Anirudha Sumant with the U.S. Department of Energy’s (DOE) Argonne National Laboratory’s Center for Nanoscale Materials (CNM) and Materials Science Division, along with collaborators at the University of California-Riverside, has developed a method to grow graphene that contains relatively few impurities and costs less to make, in a shorter time and at lower temperatures compared to the processes widely used to make graphene today.

“I’d been dealing with all these different techniques of growing graphene, and you never see such a uniform, smooth surface.”

The new technology taps ultrananocrystalline diamond (UNCD), a synthetic type of diamond that Argonne researchers have pioneered through years of research. UNCD serves as a physical substrate, or surface on which the graphene grows, and the source for the carbon atoms that make up a rapidly produced graphene sheet.

“When I first looked at the [scanning electron micrograph] and saw this nice uniform, very complete layer, it was amazing,” said Diana Berman, the first author of the study and former postdoctoral research associate who worked with Sumant and is now an Assistant Professor at the University of North Texas. “I’d been dealing with all these different techniques of growing graphene, and you never see such a uniform, smooth surface.”

Current graphene fabrication protocols introduce impurities during the etching process itself, which involves adding acid and extra polymers, and when they are transferred to a different substrate for use in electronics.

The team found that the single-layer, single-domain graphene can be grown over micron-size holes laterally, making them completely free-standing (that is, detached from the underlying substrate). This makes it possible to exploit the intrinsic properties of graphene by fabricating devices directly over free-standing graphene.

The new process is also much more cost-effective than conventional methods based on using silicon carbide as a substrate. Sumant says that the 3- to 4-inch silicon carbide wafers used in these types of growth methods cost about $1,200, while UNCD films on silicon wafers cost less than $500 to make.

The diamond method also takes less than a minute to grow a sheet of graphene, where the conventional method takes on the order of hours.

The high quality of graphene was confirmed by the UC Riverside co-authors Zhong Yan and Alexander Balandin by fabricating top-gate field-effect transistors from this material and measuring its electron mobility and charge carrier concentration.

“It is well known that certain metals, such as nickel and iron, dissolve diamond at elevated temperatures, and the same process has been used for many years to polish diamond,” said Sumant. He and his team used this property to employ nickel in converting the top layer of diamond into amorphous carbon, but it was not clear how these freed carbon atoms converted instantly into high-quality graphene.

Computer simulations developed by Narayanan, Deshmukh and Sankaranarayanan showed that certain crystallographic orientation of nickel-111 highly favor nucleation, and subsequent rapid growth of graphene;  this was then confirmed experimentally.

The researchers used the LAMMPS (Large-scale Atomic/Molecular Massively Parallel Simulator) code to carry out the computationally demanding simulations. With help from ALCF staff, the team was able to achieve a 2x performance improvement on Mira by overcoming a performance bottleneck with the code’s ReaxFF module, an add-on package for modeling chemical reactions.

These large-scale simulations also showed how graphene forms. The nickel atoms diffuse into the diamond and destroy its crystalline order, while carbon atoms from this amorphous solid move to the nickel surface and rapidly form honeycomb-like structures, resulting in mostly defect-free graphene.

The nickel then percolated through the fine crystalline grains of the UNCD, sinking out of the way and removing the need for acid to dissolve away excess metal atoms from the top surface.

“It is like meeting a good Samaritan at an unknown place who helps you, does his job and leaves quietly without a trace,” said Sumant.

“The proven predictive power of our simulations places us in a position of advantage to enable rapid discovery of new catalytic alloys that mediate growth of high-quality graphene on dielectrics and move away on their own when the growth is completed,” added Narayanan.

In addition to the utility in making minimally defective, application-ready graphene for things like low-frequency vibration sensors, radio frequency transistors and better electrodes for water purification, Berman and Sumant say that the Argonne team has already secured three patents arising from their new graphene growth method.

The researchers have already struck a collaboration with Swedish Institute of Space Physics involving the European Space Agency for their Jupiter Icy Moons Explorer (JUICE) program to develop graphene-coated probes that may help exploratory vehicles sense the properties of plasma surrounding the moons of Jupiter.

Closer to home, the team has also crafted diamond and graphene needles for researchers at North Carolina University to use in biosensing applications.

The Argonne researchers are now fine-tuning the process – tweaking the temperature used to catalyze the reaction and adjusting the thickness of the diamond substrate and the composition of the metal film that facilitates the graphene growth – to both optimize the reaction and to better study the physics at the graphene-diamond interface.

“We’re trying to tune this more carefully to have a better understanding of which conditions lead to what quality of graphene we’re seeing,” Berman said.

Other Argonne authors involved in the study were Alexnder Zinovev and Daniel Rosenmann. The paper, “Metal-induced rapid transformation of diamond into single and multilayer graphene on wafer scale,” is published in Nature Communications.

The study used resources of the CNM and the ALCF as well as the National Energy Research Scientific Computing Center at Lawrence Berkeley National Laboratory, all DOE Office of Science User Facilities. Additional support was provided by the U.S. Department of Energy’s Office of Science.