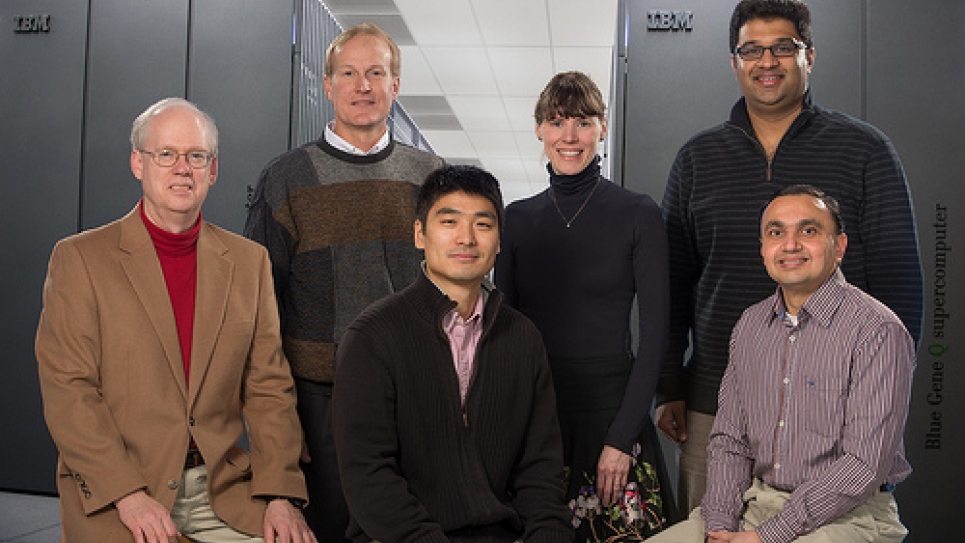 When we turn the key in our car’s ignition, we usually don’t think about the combustion process that takes place inside the engine that enables the car to go. We just know that it works.

But, what actually takes place inside the engine? How do fuel injectors, turbulent mixing and combustion chemistry impact the fuel efficiency of a vehicle? And how do engine manufacturers improve these hidden-from-view processes to increase engine efficiency?

The answers lie in computer modeling and simulation tools. Automotive and engine manufacturers are becoming increasingly reliant on computers to aid in the development of next-generation engines. Modeling and simulation software offers a cost-effective way to optimize the complex fuel spray and combustion processes, and do so over a wide range of operating conditions using a variety of fuels (e.g., gasoline, diesel, biodiesel and fuel blends).

As an example, high-fidelity simulations allow researchers to peer inside a virtual combustion chamber to see how injected fuel, air and combustion products intermingle when the engine is fired up. These interactions produce the primary breakup of the liquid fuel, which is followed by atomization and secondary breakup of the fuel into drops. These drops then vaporize and combust, resulting in the heat release that ultimately powers internal combustion engines.

This complicated process involving fluid dynamics, chemistry and combustion determines engine performance and emissions characteristics, but it would be impossible to observe and understand without the aid of computer models.

With expertise in automotive engines and combustion chemistry, and state-of-the-art transportation and high-performance computing facilities, Argonne is one of the few places in the world with the ability to rapidly advance modeling and simulation tools into the HPC realm for more intelligent engine design.

The Argonne team is currently collaborating with Convergent Science, Inc., and Caterpillar Inc. to scale up the CONVERGE code, a CFD software program widely used by industry, to run on much larger computers without any technical glitches.

According to Som, simulations with high temporal and spatial resolutions combined with Argonne’s advancements in spray and combustion modeling have necessitated the use of HPC to ensure quick turnaround times, which is of paramount interest in the industry.

The current state-of-the-art for most manufacturers involves running engine simulations with up to 50 processors. With this project, Som and his colleagues are scaling up CONVERGE to run on more than 1,000 processors.

The team’s huge leap forward was made possible by the development and implementation of an improved load-balancing algorithm called METIS (original algorithm developed at University of Minnesota). This enabled the researchers to perform the largest diesel engine simulations run to date.

“Implementation of METIS has enabled the effective use of high-performance computing resources for engine simulations,” said Keith J. Richards, vice-president and co-founder of Convergent Science, Inc. “METIS will be available in the next version of the CONVERGE code so that other original equipment manufacturers can also realize the benefits.”

The massive simulations also successfully demonstrated grid-convergence (i.e., when simulations, results are independent of the chosen numerical parameters such as grid- and time-step size).

“Grid-convergence is a critical step forward towards truly predictive engine simulations. Implementation of METIS, together with Argonne’s expertise and computational resources, has enabled us to identify the computational set-up for attaining grid-convergence,” said Dr. Peter Kelly Senecal, vice-president and co-founder of Convergent Science, Inc. “This methodology can now be widely applied across the engine manufacturing industry.”

The project has also impacted how Caterpillar approaches its modeling and simulation efforts.

“Working with Argonne researchers has provided us access to the HPC facilities and their expertise in spray and combustion modeling. Through this HPC study, we have learned more about model settings that have improved our simulation practices at Caterpillar,” said Marcus Weber, team leader at Caterpillar, Inc.

In the near future, the team plans to use Mira, the ALCF’s new 10-petaflop IBM Blue Gene/Q system, to run diesel engine simulations on an unprecedented 20,000 processors. As part of this project, Som and his colleagues will also pursue further model enhancements, such as higher-fidelity turbulence models and improved prediction of turbulence-chemistry interactions.

“With the ability to run more detailed simulations at a faster rate, manufacturers will have valuable new information that will ultimately help them design better engines more quickly and at a lower cost,” Som said.

He also believes Argonne’s combination of expertise and HPC capabilities will pave the way for new industry partnerships.

“Most places don’t have the kind of resources we have on site at Argonne,” Som said. “We’re hoping our HPC work will spawn a service for the engine development community.”

Funding for this work is provided by the U.S. Department of Energy’s Office of Energy Efficiency and Renewable Energy, Vehicle Technologies Program under Gurpreet Singh.