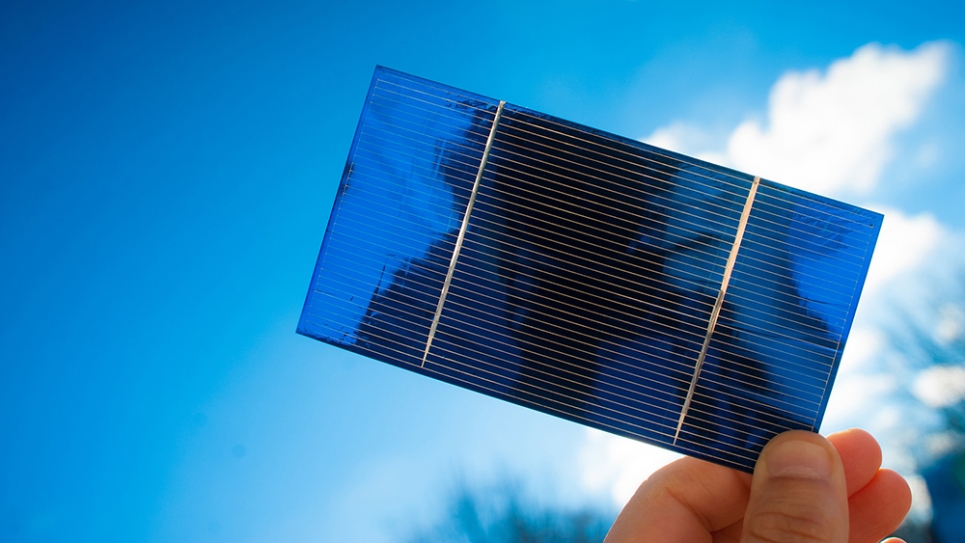 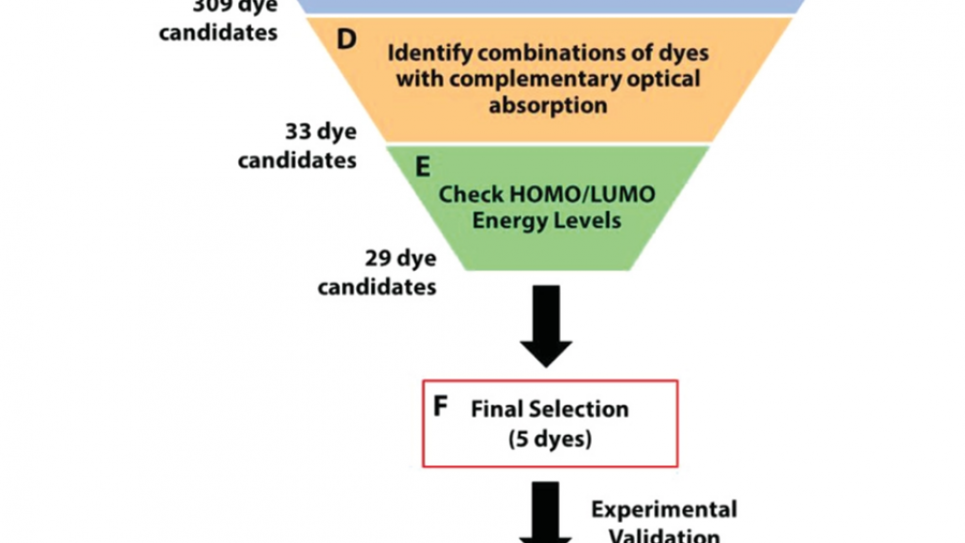 Finding the best light-harvesting chemicals for use in solar cells can feel like searching for a needle in a haystack. Over the years, researchers have developed and tested thousands of different dyes and pigments to see how they absorb sunlight and convert it to electricity. Sorting through all of them requires an innovative approach.

Now, thanks to a study that combines the power of supercomputing with data science and experimental methods, researchers at the U.S. Department of Energy’s (DOE) Argonne National Laboratory and the University of Cambridge in England have developed a novel ​“design to device” approach to identify promising materials for dye-sensitized solar cells (DSSCs). DSSCs can be manufactured with low-cost, scalable techniques, allowing them to reach competitive performance-to-price ratios.

The team, led by Argonne materials scientist Jacqueline Cole, who is also head of the Molecular Engineering group at the University of Cambridge’s Cavendish Laboratory, used the Theta supercomputer at the Argonne Leadership Computing Facility (ALCF) to pinpoint five high-performing, low-cost dye materials from a pool of nearly 10,000 candidates for fabrication and device testing. The ALCF is a DOE Office of Science User Facility.

“This study is particularly exciting because we were able to demonstrate the full cycle of data-driven materials discovery — from using advanced computing methods to identify materials with optimal properties to synthesizing those materials in a laboratory and testing them in actual photovoltaic devices,” Cole said.

Through an ALCF Data Science Program project, Cole worked with Argonne computational scientists to create an automated workflow that employed a combination of simulation, data mining and machine learning techniques to enable the analysis of thousands of chemical compounds concurrently. The process began with an effort to sort through hundreds of thousands of scientific journals to collect chemical and absorption data for a wide variety of organic dye candidates.

“The advantage of this process is that it takes away the old manual curation of databases, which involves many years’ worth of work, and reduces it to a matter of a few months and, ultimately, a few days,” Cole said.

The computational work involved using finer and finer screening techniques to generate pairs of potential dyes that could work in combination with each other to absorb light across the solar spectrum. ​“It’s almost impossible to find one dye that really works well for all wavelengths,” Cole said. ​“This is particularly true with organic molecules because they have narrower optical absorption bands; and yet, we really wanted to concentrate just on organic molecules, because they are significantly more environmentally friendly.”

To narrow the initial batch of 10,000 potential dye candidates down to just a few of the most promising possibilities involved again using ALCF computing resources to carry out a multistep approach. First, Cole and her colleagues used data mining tools to eliminate any organometallic molecules, which generally absorb less light than organic dyes at a given wavelength, and organic molecules that are too small to absorb visible light.

Even after this first pass, the researchers still had approximately 3,000 dye candidates to consider. To further refine the selection, the scientists screened for dyes that contained carboxylic acid components that could be used as chemical ​“glues,” or anchors, to attach the dyes to titanium dioxide supports. Then, the researchers used Theta to conduct electronic structure calculations on the remaining candidates to determine the molecular dipole moment — or degree of polarity — of each individual dye.

“We really want these molecules to be sufficiently polar so that their electronic charge is high across the molecule,” Cole said. ​“This allows the light-excited electron to traverse the length of the dye, go through the chemical glue, and into the titanium dioxide semiconductor to start the electric circuit.”

After having thus narrowed the search to approximately 300 dyes, the researchers used their computational setup to examine their optical absorption spectra to generate a batch of roughly 30 dyes that would be candidates for experimental verification. Before actually synthesizing the dyes, however, Cole and her colleagues performed computationally intensive density functional theory (DFT) calculations on Theta to assess how each of them were likely to perform in an experimental setting.

The final stage of the study involved experimentally validating a collection of the five most promising dye candidates from these predictions, which required a worldwide collaboration. As each of the different dyes had been initially synthesized in different laboratories throughout the world for some other purpose, Cole reached out to the original dye developers, each of whom sent back a new sample dye for her team to investigate.

“It was really a tremendous bit of teamwork to get so many people from around the world to contribute to this research,” Cole said.

In looking at the dyes experimentally at Argonne’s Center for Nanoscale Materials, another DOE Office of Science User Facility, and at the University of Cambridge and the Rutherford Appleton Laboratory, Cole and her colleagues discovered that some of them, once embedded into a photovoltaic device, achieved power conversion efficiencies roughly equal to that of the industrial standard organometallic dye.

“This was a particularly encouraging result because we had made our lives harder by restricting ourselves to organic molecules for environmental reasons, and yet we found that these organic dyes performed as well as some of the best known organometallics,” Cole said.

The research was funded by the DOE’s Office of Science.